Burgers, milkshakes, fries and … an attack on President Joe Biden?

A viral image purports to show a restaurant chain taking a swipe against Biden with an outdoor sign blaming him for high gas prices. But the anti-Biden message is a fake.

The image shows what appears to be a sign associated with Big Boy, a Michigan-based fast-food chain, sporting a message that takes a dig at Biden and a victory lap for his predecessor.

"President Donald Trump predicted if Biden was elected, you'd see $5, $6 and $7 gas," the lettering says. "He was right."

The image was shared widely on Facebook, where it was flagged as part of Facebook’s efforts to combat false news and misinformation on its News Feed. (Read more about our partnership with Facebook.)

"My favorite burger joint summed it up perfectly," one June 14 post said. 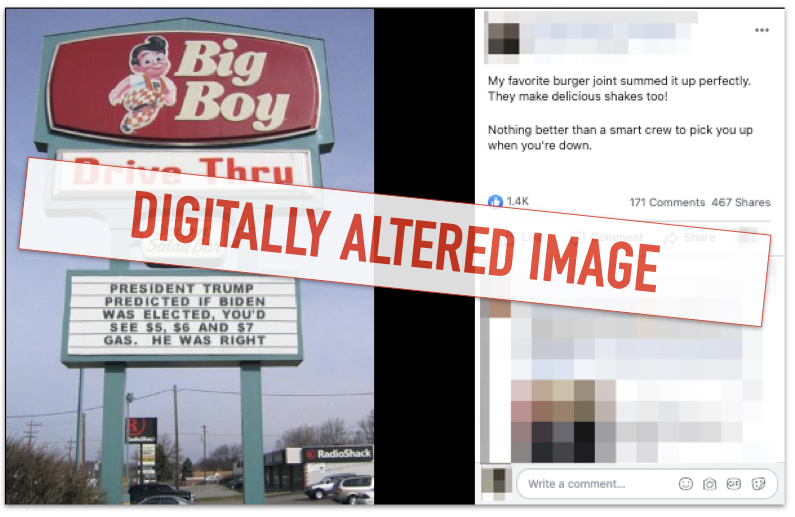 Only, the restaurant didn’t sum anything up. There’s no evidence PolitiFact could find that any Big Boy location had decorated a sign with such an attack.

Instead, the image of the sign was digitally altered. (We reached out to Big Boy for comment, but we did not receive a response.)

Trump did say in multiple speeches during his reelection campaign that gas prices would jump to "$5, $6 or $7" per gallon under a Biden presidency — although as PolitiFact has reported, Biden has had little to do with the hike in prices.

But the image circulating on social media appears to have been created using a meme generator available for free online. PolitiFact could not determine what the sign in the image originally said, but reverse image searches on TinEye and Yandex turned up several other memes altering the sign’s lettering in the same fashion and dating back at least as far as 2006.

Older memes have changed the sign’s message to make jokes about the restaurant serving everything from deadly soup to figurines of the Virgin Mary to "covfefe" — a reference to a likely typo in a viral tweet Trump sent in 2019.

Others have targeted Democrats. One showed a purported sign saying Big Boy was selling cake "so rich the Democrats want 90% of it."

Another, fact-checked by Reuters, pretended to show the restaurant inviting patrons to watch Fox News host "Tucker Carlson on our big screen" instead of the first hearing from the House committee investigating the Jan. 6, 2021, insurrection.

We also created another. It says: "We rate this viral image False."