Facebook posts
stated on February 24, 2022 in social media posts:
A photo of a wounded young child was captured in Ukraine in 2022.

Social media users shared a "heartbreaking" image of an injured child, describing the child as a victim of Russia’s invasion of Ukraine.

"One of the most heartbreaking images from the Russia/Ukraine war. Putin must end this for humanity’s sake," said one Feb. 24 tweet sharing the image.

"Keep praying for Ukraine," said a Facebook post shared the same day. "This is a child of God. Lord please cover your children with your shield … There is war all around us."

Ukrainian President Volodymyr Zelensky said Feb. 28 that 16 Ukrainian children have died and 24 are injured as a result of Russian attacks so far. But this particular image of a wounded child was taken in Syria in 2018. 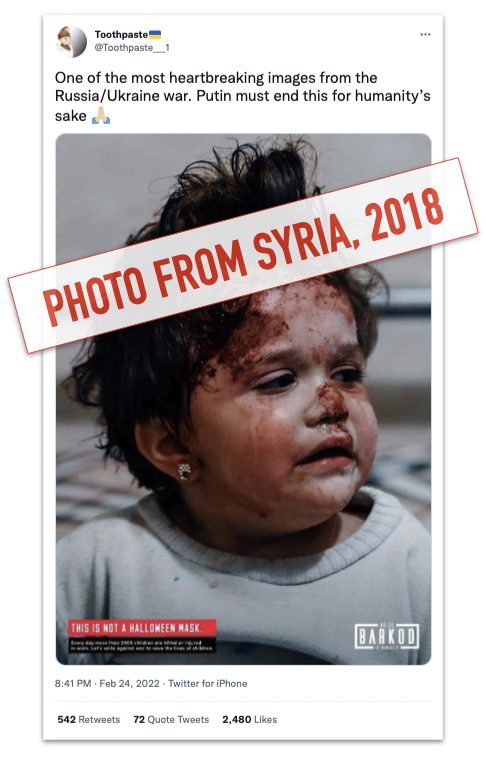 Reverse image searches revealed the same photo featured in news articles about the Syrian war from 2018, as other fact-checkers also reported. The original photo was snapped by the European Pressphoto Agency's Mohammed Badra. It is dated Jan. 3, 2018.

The European Pressphoto Agency’s caption reads: "A young girl is treated at a hospital after a bombing in Mesraba, Eastern al-Ghouta, Syria, 03 January 2018. At least 19 people were killed in airstrikes on the cities of Erbeen and Mesraba by forces loyal to the Syrian government."

We rate miscaptioned posts that say the child is from Ukraine False.

Insider, "Ukraine accuses Russia of killing 16 children and injuring 45 more in its invasion: 'Russia has shown what it has become,'" Feb. 28, 2022