Pearson Sharp
stated on March 11, 2022 in a TV segment:
The Russian airstrike on a maternity hospital in Mariupol, Ukraine, had “the makings of yet another false flag operation” led by the U.S.

On March 9, Russia blasted a maternity hospital in the Ukrainian port city of Mariupol.

Fatalities from the airstrike included a pale, bloodied pregnant woman who was photographed as she was carried from the hospital on a stretcher. Her baby died with her, the Associated Press reported. The attack left a crater in the ground, cars in flames and facilities damaged.

Ukrainian officials said at least 17 people were injured, and at least five have died since the attack, according to CNN. 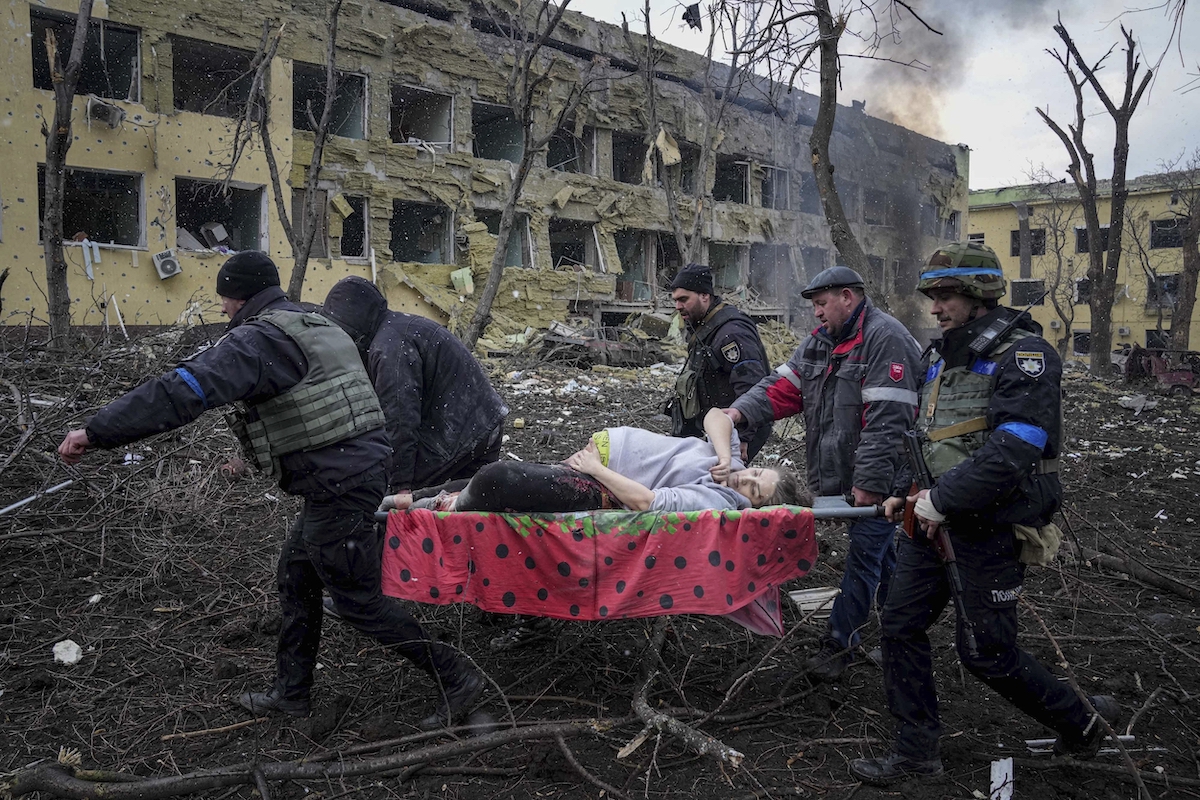 Ukrainian emergency employees and volunteers carry an injured pregnant woman from a maternity hospital that was damaged by shelling in Mariupol, Ukraine, on March 9, 2022. (AP)

"A strike on a maternity hospital is a final proof, proof of a genocide of Ukrainians taking place," Ukraine President Volodymyr Zelensky said after the attack.

Russian officials, meanwhile, teetered between denial, justification and disinformation. They asserted that the hospital was empty and being used as a base for armed forces, and they falsely claimed that certain pregnant victims were crisis actors.

Those and other claims casting doubt on the Mariupol hospital attack found a home on the far-right U.S. channel One America News Network. In a March 11 segment, OAN host Pearson Sharp baselessly suggested that the airstrike was a U.S.-led "false flag."

"The United States has a long, storied history of conducting false flag operations in pursuit of its own political agenda," Sharp said, citing U.S. allegations of weapons of mass destruction in Iraq and unspecified "false flag gas attacks" that he claimed the U.S. orchestrated in Syria.

Sharp continued: "It looks like we have the makings of yet another false flag operation, this time in the far-flung land of Ukraine, where Biden and his cronies are desperately trying to cook up more conflict to distract from their monumental failures here in America …" The OAN host went on to claim that the hospital had "no patients inside."

"There is no evidence the United States has been militarily engaged in any element of the conflict in Ukraine, let alone the bombing of a hospital in Mariupol," said Graham Brookie, the senior director of the Atlantic Council’s Digital Forensic Research Lab. "There is no legitimate reason that the United States would make worse a war that it has publicly denounced and is actively engaged in trying to end with every lever at its disposal."

In an email to PolitiFact, OAN’s Sharp said that other stories of questionable veracity have come out of Ukraine, such as the heroic yet unverified tale of the "Ghost of Kyiv" fighter pilot. He also pointed to another time in the segment where he hedged slightly, saying, "We’re not saying we know what happened here, or that this was a false flag."

"All I’m saying in my report is that we have a journalistic duty to question what we’re told, rather than straightaway accept it as fact," Sharp told PolitiFact. "Everyone is ignoring the whole point."

Governments have plotted some false flags throughout history, albeit sparingly.

But Sharp went beyond merely questioning what Ukrainian and international officials have said.

"As usual, OAN does not provide any evidence for their claim," said Scott Radnitz, director of the Ellison Center for Russian, East European and Central Asian Studies at the University of Washington. "This war is one of the best-covered ever, considering the wide availability of smartphones. The bombing of the hospital in Mariupol had multiple eyewitnesses and its aftermath was caught on camera."

Journalists from the Associated Press, who were the last reporters left in Mariupol before getting out as Russia besieged the city, shot photos and video of the wreckage. 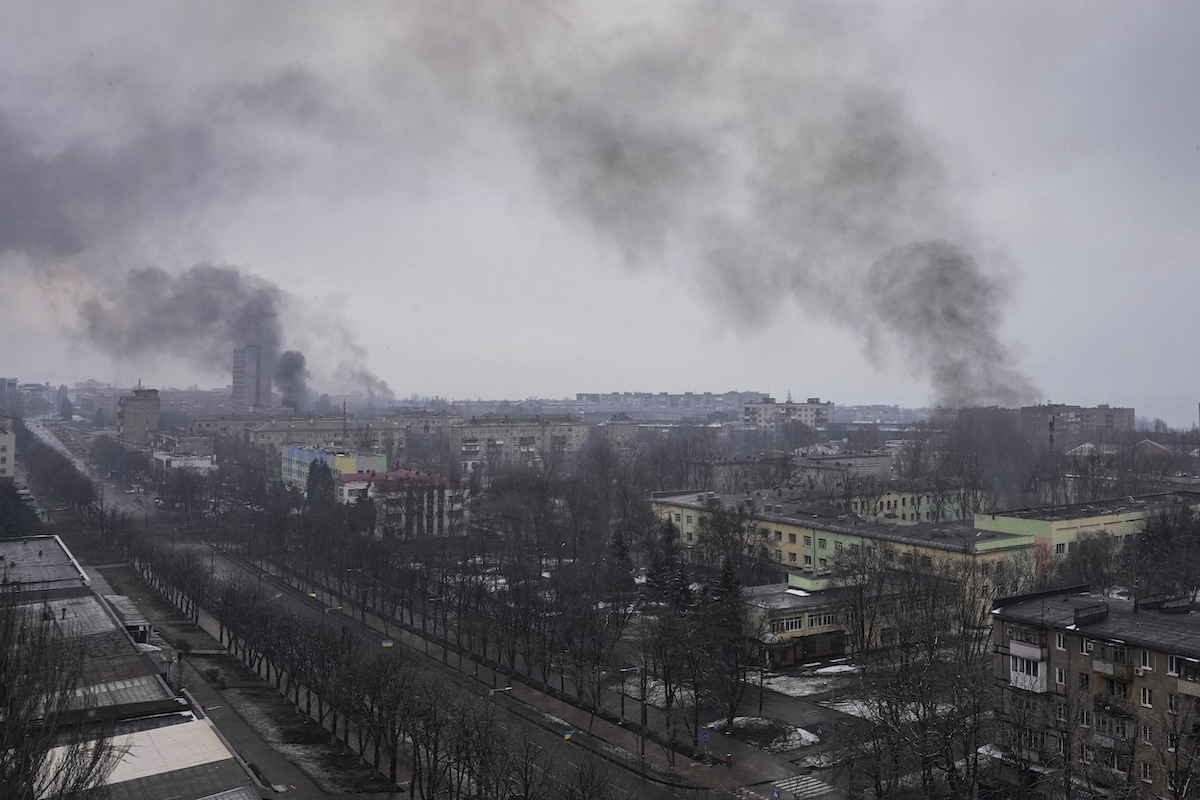 "We watched smoke rise from a maternity hospital," they reported. "When we arrived, emergency workers were still pulling bloodied pregnant women from the ruins."

A pregnant woman who later gave birth to a baby girl was photographed at the scene and gave the AP her eyewitness account: "We were lying in wards when glass, frames, windows and walls flew apart … We don’t know how it happened. We were in our wards and some had time to cover themselves, some didn’t." 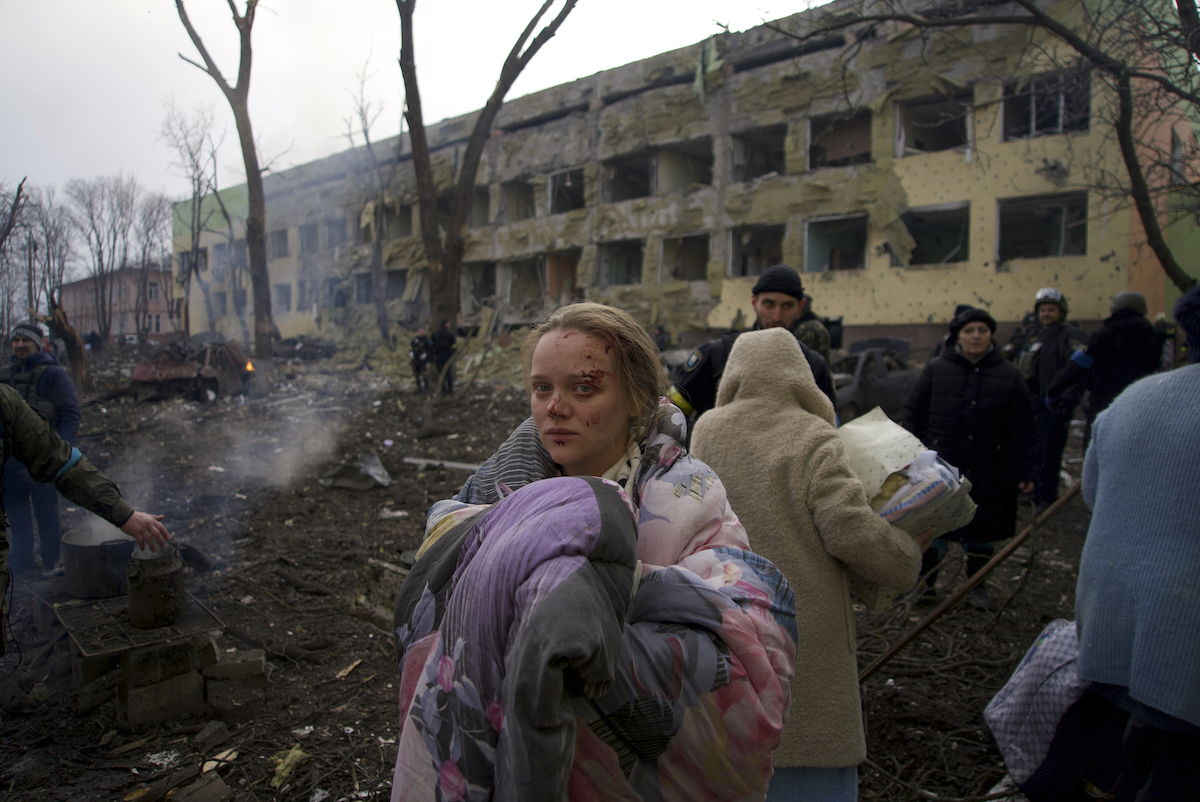 Mariana Vishegirskaya stands outside a maternity hospital that was damaged by shelling in Mariupol, Ukraine, on March 9, 2022. (AP)

Additional footage was posted to Telegram, including by Zelensky and the city council in Mariupol. Several news organizations also verified videos from the hospital.

A U.N. spokesperson laid the blame on Russia in a press briefing March 11.

By claiming without evidence that the hospital had been a base for Ukrainian military activity, the Russian Foreign Ministry effectively admitted to the attack, Brookie said.

Michael O’Hanlon, a senior fellow and the director of research in foreign policy at the Brookings Institution, said it wouldn’t make sense for the U.S. to gin up a false flag as Sharp alleged.

"Biden and team are trying to keep us out of this war," O’Hanlon said. "So concocting stories of atrocities would serve little purpose and might even be counterproductive."

But Sharp’s segment would have been welcomed by Russian officials seeking to avoid blame, and by Russian state media, where such false narratives regularly get amplified, experts said.

"Wars always involve propaganda, and aggressors benefit when their actions that might incur global condemnation are obscured or blamed on the other side," Radnitz said. "OAN, whether deliberately or inadvertently, assists Russia in this effort."

Sharp said the attack on the Mariupol hospital had "the makings of yet another false flag operation" by the U.S.

There is no evidence that the attack was staged or a false flag carried out by the U.S. Its aftermath was documented by workers, witnesses and journalists on the ground.

Email statement from the U.S. Department of Defense, March 21, 2022

Email correspondence with Scott Gehlbach, professor of political science at the University of Chicago, March 21, 2022

Email interview with Scott Radnitz, associate professor of Russian and Eurasian studies and director of the Ellison Center for Russian, Eastern European, and Central Asian Studies at the University of Washington, March 21, 2022

Email interview with Michael O’Hanlon, senior fellow and director of research in foreign policy at the Brookings Institution, March 21, 2022