Tweets
stated on March 20, 2022 in a tweet from a hoax account:
Virginia Tech swimmer Reka Gyorgy tweeted, “My finals spot was stolen by Lia Thomas, who is a biological male.”

Pennsylvania's Lia Thomas competes in the 200 freestyle finals at the NCAA Swimming and Diving Championships on March 18, 2022, at Georgia Tech in Atlanta. (AP)

An imposter Twitter account claiming to belong to Virginia Tech swimmer Reka Gyorgy purported to show Gyorgy tweeting that her "finals spot was stolen" in a race won by Lia Thomas, who became the first transgender woman to win an NCAA swimming tournament.

"My finals spot was stolen by Lia Thomas, who is a biological male," said the March 20 tweet, posted by a hoax account named @RekaGyorgy_. "Until we all refuse to compete nothing will change. Thanks for all the support retweets and follows I wont stop fighting." 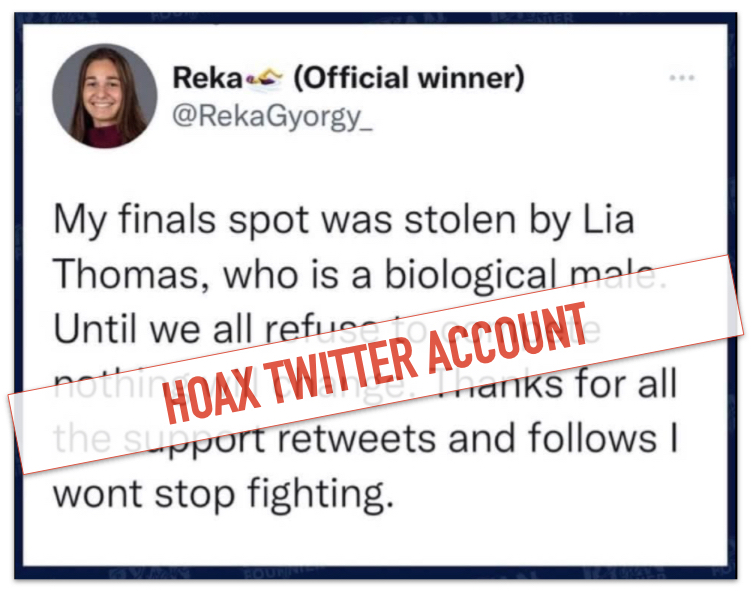 Before the account’s suspension, the tweet was retweeted tens of thousands of times, including by Caitlyn Jenner, a transgender woman, who wrote, "This is not OK on any level."

Screenshots of the tweet took off on Facebook and Instagram, racking up nearly 450,000 interactions in a matter of days, according to CrowdTangle, a social media insights tool. The screenshots were shared by prominent right-wing media organizations such as Breitbart News and the Blaze, conservative commentators like talk radio show host Ben Ferguson, and Republican politicians, including Sen. Tommy Tuberville, R-Ala. 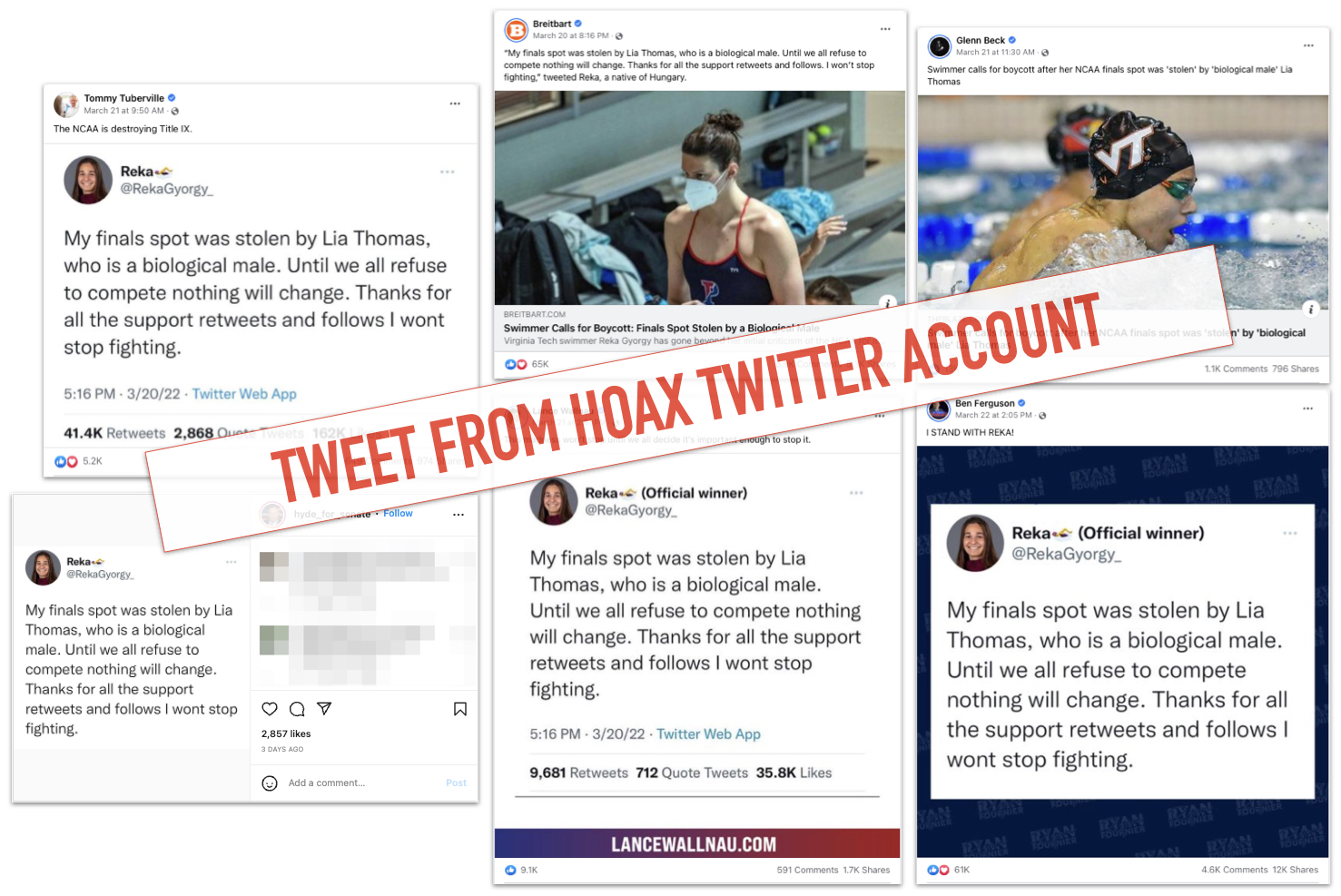 Others involved with Virginia Tech’s athletics confirmed the same.

Sergio Lopez Miro, the director and head coach of Virginia Tech’s swimming and diving team, said the account was "fake" and did not belong to Gyorgy. He said he reported it to Twitter.

Twitter permanently suspended the account for violating its policy against platform manipulation and spam, and specifically its rules against the creation of fake accounts, a spokesperson said.

The hoax Twitter account joined the platform in November 2021. It had posted only one tweet and a handful of retweets of conservative politicians and a Daily Caller reporter, according to the Internet Archive.

The imposter account was originally listed under the Twitter handle @amanda191923 before changing to @RekaGyorgy_, Reuters and the Associated Press reported.

Gyorgy did publicly criticize the NCAA over its rules allowing Thomas’ participation.

In February, USA Swimming announced a policy that would require transgender athletes to lower their testosterone levels for three years before competing. The new rule would have excluded Thomas from competition, but the NCAA opted not to adopt it mid-season, thereby allowing her to compete in the collegiate championships, according to the New York Times.

Gyorgy, who swam for Hungary in the 2016 Olympics and finished No. 17 in the women’s 500-yard freestyle race Thomas won, penned a letter of complaint to the NCAA on March 20. Finishing outside of the top 16 meant she missed the cut to advance to the finals.

"I respect and fully stand with Lia Thomas; I am convinced that she is no different than me or any other D1 swimmer who has woken up at 5am her entire life for morning practice," Gyorgy wrote in the letter. "On the other hand, I would like to critique the NCAA rules that allow her to compete against us, who are biologically women. I’m writing this letter right now in hopes that the NCAA will open their eyes and change these rules in the future."

"This is my last college meet ever and I feel frustrated. It feels like that final spot was taken away from me because of the NCAA’s decision to let someone who is not a biological female compete. I know you could say I had the opportunity to swim faster and make the top 16, but this situation makes it a bit different and I can’t help but be angry or sad … Every event that transgender athletes competed in was one spot taken away from biological females throughout the meet."

The tweet came from an imposter Twitter account that has since been banned for violating the platform’s policies against the creation of fake accounts, a fact that was confirmed by Gyorgy as well as Virginia Tech’s swimming coach and athletics department.

Gyorgy did write a letter to the NCAA over the issue, but she didn't use those words.