Some Republican senators lobbed misleading attacks on Judge Ketanji Brown Jackson during her Supreme Court confirmation hearings, accusing the nominee of going easy on child pornography offenders throughout her career.

During the second day of the hearings on March 22, right-wing commentators furthered those attacks by sharing a shortened, out-of-context clip of Jackson speaking. The clip, they falsely claimed, showed Jackson defending her record and advocating for light sentences for child pornography offenders who view the content online. 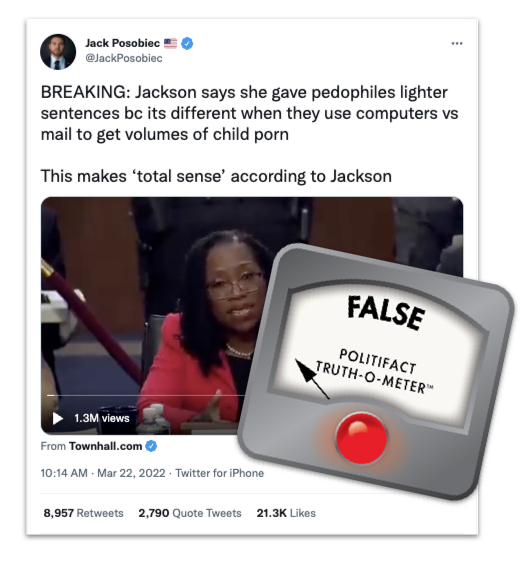 Other commentators also shared the text and video from the tweet, and right-wing websites like LifeNews.com published entire articles with dubious headlines such as, "Ketanji Brown Jackson Defends Light Sentences for Child Pornographers, Not as Bad if They Just Use a Computer."

But Posobiec’s viral tweet omitted context about what she said and changed her words.

Jackson was summarizing a 2012 report concerning federal sentencing guidelines for child pornography, the Associated Press reported. She was not arguing that child pornography isn’t as bad if it’s viewed online, or saying she gives offenders who use the internet lighter sentences.

The 2012 report, she explained, discussed how the amount of child pornography a defendant accesses is not as indicative of the seriousness of the offense as it used to be; the internet has made such content more widely available. The guidelines "made total sense before, when we didn’t have the internet," she said, but now they were outdated.

Jackson was formerly the vice chair of the U.S. Sentencing Commission, the independent and bipartisan agency created by Congress to create sentencing guidelines aimed at helping judges hand down sentences that are proportional to the crime committed and the circumstances of it.

The 2012 report by the commission found that the sentences in two-thirds of child pornography cases in 2011 that did not involve production came in below the sentencing guidelines. It also said that the existing sentencing scheme "no longer adequately distinguishes among offenders based on their degrees of culpability" in the age of the internet.

Several sentencing "enhancements" that trigger harsher punishments based, for example, on the use of a computer or the volume of images possessed, "now apply to most offenders and, thus, fail to differentiate among offenders in terms of their culpability," the report said. "These enhancements originally were promulgated in an earlier technological era, when such factors better served to distinguish among offenders. Indeed, most of the enhancements … were promulgated when the typical offender obtained child pornography in printed form in the mail."

During the March 22 hearing, Sen. Dick Durbin, D-Ill., brought up that report and Jackson’s work as the vice chair of the sentencing commission. He asked:

"What we are dealing with here is an issue, which even this committee and members of this committee have not loathed to address again: the original law was written at least nine or 10, maybe longer, years ago, and the quantity of material was relevant to the sentencing. But now that we have computer access to voluminous amounts of material, it has raised the question, has it not, within the judiciary as to the appropriate sentencing in today’s circumstances. This was a question that was raised before the sentencing commission, was it not?"

The video shared by Posobiec and others left out Durbin’s question, along with the opening portion of Jackson’s response. Here’s how Jackson answered in full:

"It was, senator. The Sentencing Commission has written at least one report — it did when I was there — looking at the operation of this guideline. As you said, the guideline was based originally on a statutory scheme and on directives, specific directives by Congress at a time in which more serious child pornography offenders were identified based on the volume, based on the number of photographs that they received in the mail. That made total sense before, when we didn’t have the internet, when we didn’t have distribution. But the way that the guideline is now structured, based on that set of circumstances, is leading to extreme disparities in the system because it’s so easy for people to get volumes of this kind of material now, by computers. So it’s not doing the work of differentiating who is a more serious offender in the way that it used to. So the commission has taken that into account, and perhaps even more importantly, courts are adjusting their sentences in order to account for the changed circumstances. But it says nothing about the court’s view of the seriousness of this offense."

Jackson did not say this.

The full context of the clip presented in Posobiec’s tweet shows that Jackson was discussing the findings of a 2012 report from the U.S. Sentencing Commission, not explaining her own rulings or defending child pornography offenders who commit their crimes via the internet.

The report detailed how the federal sentencing guidelines had fallen behind the times as the internet changed the way most child pornography offenders were accessing the content.