People grieve during the Hope Border Institute prayer vigil Sunday, Aug. 4, 2019 in El Paso, Texas, a day after a mass shooting at a Walmart store. (AP)

In the days since the mass shootings in El Paso and Dayton, we’ve seen a flood of theories, facts and figures to explain the attacks and why they happen in the United States so frequently.

If you’ve been reading our site this week, you know well that some of what’s offered as fact on TV and social media is not really accurate. To help you keep it all straight, we’ve rounded up in one place all of the claims we have fact-checked this week from politicians on both sides, TV pundits and social media users.

Fact-checking President Trump on video games and his guns record

Two days before President Donald Trump floated the idea of background checks, he joined other Republicans, such as Texas Lt. Gov. Dan Patrick, in talking about a connection between violent video games and gun violence.

"We must stop the glorification of violence in our society," he said at one point during the Aug. 5 address. "This includes the gruesome and grisly video games that are now commonplace."

We reviewed the scientific research, and it shows the link is weak. "There is absolutely no scientific evidence that gaming is linked with mass shootings," said the University of Oxford’s Andrew Przybylski, who led one of the studies we examined.

In the same speech, Trump also defended his administration’s record on guns: "Last year, we prosecuted a record number of firearms offenses, but there is so much more that we have to do."

We rated that Mostly True, as the Justice Department announced in 2018 that a record 15,300 defendants had been charged with federal firearm offenses. But the vast majority of gun crimes are handled at the state level, so Trump was focused on a small part of a larger issue.

"We have done much more than most administrations," Trump said. "And it’s ... really not talked about very much, but we’ve done, actually, a lot."

Trump has banned bump stocks, supported a bipartisan effort to improve the background-check database, and prioritized gun-related prosecutions — moves that, in sum, position him favorably compared to some of his predecessors. But the bulk of his administration’s gun-related efforts have focused on expanding gun rights and opposing stricter limits on them, so we rated his claim Half True.

Democratic lawmakers have pinned the blame more squarely on guns and laws that they believe inadequately restrict them.

Sen. Dianne Feinstein, whose home state of California saw a mass shooting on July 28, tweeted, "There are more guns in this country than people, and more per capita than any other country in the world. And there are more gun deaths by far."

The senator’s claim that "there are more gun deaths by far" is False, PolitiFact California found.

The United States has more gun-related deaths than other countries of similar socioeconomic standing, and in 2017, it had the highest number of gun-related suicides, according to a June 2018 report from the University of Washington. But Brazil had the most overall gun deaths, at 48,493, compared to 40,229 in the United States.

A different claim on the same subject from presidential candidate Beto O’Rourke was a lot more accurate. PolitiFact Texas rated this claim by the former congressman from El Paso as True: "Some years, in a city of almost 700,000, we had five murders the entire year. Our average over the last 10 years is 18. We exceeded that average just on one day." The numbers came from a January press release from the city of El Paso.

More people killed in one day in #elpaso than in an entire year. @BetoORourke #ElPasoStrong #ElPasoShooting @dallasnews pic.twitter.com/e2gvWV8xEL

Other Democrats who chimed in include Vermont Sen. Bernie Sanders and former President Bill Clinton.

We rated that Half True. There’s no official registry charting the number of assault-style firearms in the United States or in the military, but estimates suggest the civilian figure could exceed 5 million, which would make it higher than the estimated number owned by the military.

Clinton also got a Half True for tweeting that there was "a big drop in mass shooting deaths" after the 1994 assault weapons ban passed and a subsequent rise when it expired.

How many more people have to die before we reinstate the assault weapons ban & the limit on high-capacity magazines & pass universal background checks? After they passed in 1994, there was a big drop in mass shooting deaths. When the ban expired, they rose again. We must act now.

While the former president was correct that mass shootings have risen since the ban expired, he oversold the degree to which they dropped after it passed.

At a campaign stop in Iowa, former Vice President Joe Biden laid into President Donald Trump for stirring up the worst in Americans, saying that, "Days before the midterm, he fomented fears of a caravan headed to the United States and created hysteria when he said, ‘Look, look at what's marching up. This is an invasion.’ He asserted that immigrants would quote, ‘carve you up with a knife’."

Trump regularly speaks of an invasion. He has mentioned it at many rallies and has used the word in seven tweets since July 2015 to refer to immigrants more broadly. But Trump did not warn that immigrants will "carve you up with a knife." We rated this False. 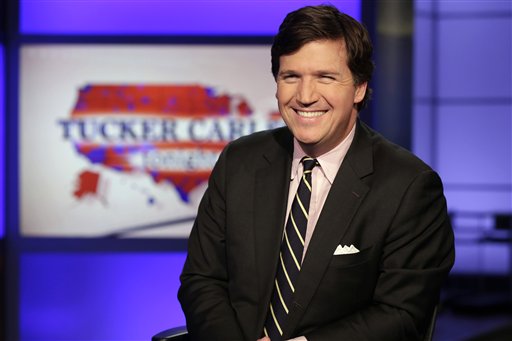 Carlson on the set of his Fox News show.

PunditFact identified five reasons why Carlson’s claim is wrong. Here are a few: Former FBI director Christopher Wray testified that it is "a persistent, pervasive threat," polling shows a substantial number of Americans sympathize with white supremacists, and an unclassified intelligence bulletin said white supremacists killed more people than any other domestic extremist group between 2000 and 2016.

MSNBC anchor Stephanie Ruhle also saw the Truth-O-Meter for claiming Walmart, the site of the El Paso shooting, is "one of the largest sellers of assault-style weapons." Walmart stopped selling semi-automatic rifles in 2015, which makes Ruhle’s statement False.

Also on MSNBC, host Nicolle Wallace earned a Pants on Fire for saying that Trump was talking about "exterminating Latinos." Wallace apologized.

We’ve also been tracking the flurry of misinformation spreading through Facebook groups and even Instagram Stories. Many of the claims centered on conspiracies we’ve seen before.

Several Facebook posts, for example, claimed the shootings were "false flag" operations staged by "deep state" Democrats hoping to push an anti-gun agenda ahead of the 2020 presidential election. After rating those claims Pants on Fire, we talked to experts to understand why some people think mass shootings are staged every time.

Other whoppers from Twitter and Facebook: The Dayton shooting suspect didn’t die in 2014, and Trump did not get rid of his tweets portraying immigrants as invaders.

Other false posts tricked social media users into believing that police in other major cities had foiled similar mass shooting attempts, that the New York Post "changed the identity of the El Paso shooter" in stories that ran on consecutive days, and that Immigrations and Customs Enforcement tried to deport people at a reunification site for victims of the El Paso shooting. Still other Facebook memes claimed, without supporting evidence, that most mass shootings can be traced back to prescription drug usage.

Yet another post drew hundreds of thousands of reactions on Twitter for comparing the number of mass shootings in the United States to other countries for 2019.

We found that broadly speaking, the idea that mass shootings on the level of El Paso and Dayton occur more frequently in the United States than elsewhere is backed by the available data, but the tweet is more specific than that data would allow.

• A Republican state representative from Wisconsin falsely said there have been "less mass shootings under Trump," a claim PolitiFact Wisconsin rated Pants on Fire.

• ​Ivanka Trump mixed up the details in a Mostly False claim about a deadly weekend in Chicago, including a shooting near a playground.