It wasn’t long after Jeffrey Epstein was found dead in a Manhattan jail cell Aug. 10 that conspiracy theories started to bloom.

Some social media users baselessly speculated that Epstein, an American financier indicted on sex trafficking charges, was killed at the behest of Hillary and Bill Clinton. Others linked his death to President Donald Trump. And still others falsely claimed that Epstein never died at all.

None of those claims are backed by available evidence — and some are rooted in decades-old, long-debunked conspiracy theories. But social media posts promoting them have amassed tens of thousands of shares on platforms like Facebook and Twitter.

Some of those posts were flagged as part of Facebook’s efforts to combat false news and misinformation on its News Feed. (Read more about our partnership with Facebook.)

Officials initially said Epstein, who was accused of abusing and trafficking underage girls, hanged himself. The New York City medical examiner's office finished an autopsy soon after he was found but said it needed "further information" to formally conclude a cause of death. Federal investigators are still in the early stages of parsing through the particulars of Epstein’s death out of an "abundance of caution."

Until we get more concrete details about Epstein’s death, we’re not rating claims that speculate about the factors that caused it. But conspiracies about Epstein are rampant on social media, so we wanted to check out the most viral ones and go through the facts.

What we know about Epstein’s death

First, let’s start with some real facts about Epstein’s death.

Guards doing morning rounds at the Metropolitan Correctional Center in Lower Manhattan found him dead around 6:30 a.m. on Aug. 10 from an apparent hanging. His death came a little more than two weeks after another attempt on his own life, also by hanging.

News reports have said that Epstein had been taken off suicide watch about a week prior to his death. Two guards were supposed to check on him regularly but weren’t following that protocol the night he died. He also didn’t have a cellmate and was alone the night of his death.

Criminal justice experts say that suicide is endemic in American jails. A 2016 federal report found that suicide was the leading cause of death in local jails in 2014 — the last year for which such data were released — and accounted for 35% of all jail inmate deaths.

Investigators are still looking into Epstein’s death. But considering he was potentially facing 45 years in prison if convicted, the high rates of suicide in American jails and Epstein’s previous attempt on his own life, foul play remains highly unlikely.

In the hours after news broke about Epstein’s apparent suicide, the term "Clintons" and #ClintonBodyCount started trending behind "Epstein" on Twitter. While the posts varied, the central, baseless claim they made remained the same: that the Clintons somehow orchestrated Epstein’s death.

"Died of SUICIDE on 24/7 SUICIDE WATCH ? Yeah right! How does that happen," Terrence Williams, a comedian with more than 500,000 followers, tweeted Aug. 10, racking up more than 68,000 retweets. "#JefferyEpstein had information on Bill Clinton & now he’s dead."

As of now, there is no evidence to suggest foul play in Epstein’s death, much less that it was coordinated by a former president. But according to Hoaxy, a tool that visualizes the spread of tweets, Williams’ post was among the most-shared tweets with #ClintonBodyCount — thanks in part to a retweet from President Trump. 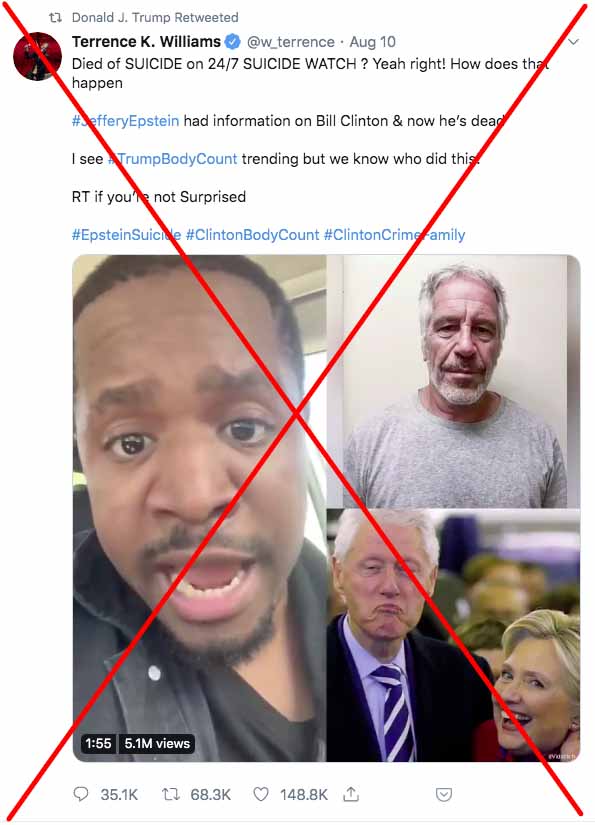 A top U.S. Housing and Urban Development Department official amplified the conspiracy on Instagram. Williams cross-posted his claim in a video on Facebook, where it got more than 400,000 views. We found several other posts on Facebook that were shared thousands of times.

The conspiracy that the Clintons kill people is not new. In a 1998 fact check about a list of people purportedly murdered by the Clintons, Snopes wrote that similar rumors had been circulating "for about 20 years." The fact-checking site researched dozens of people on the bogus hit list and rated the hoax false.

PolitiFact has also done extensive fact-checking of conspiracies about the Clintons killing people. In each case, we rated those hoaxes False or Pants on Fire — our worst ratings.

Now let’s look at the second component of Clinton-related conspiracies — the financier’s connection to the former president. This has some basis in fact, but Clinton’s staff has downplayed the connection.

During his life, Epstein made the acquaintance of many powerful people, including Bill Clinton. The former president rode on the financier’s private jet more than a dozen times in the early 2000s, according to flight logs published by Gawker in 2015. A 2016 report from Fox News increased that number to at least 26. Clinton recruited Epstein’s plane for a week-long humanitarian trip to Africa in 2002, before the financier was publicly accused of wrongdoing.

A recent statement, which the former president’s press secretary tweeted July 8, alleged that Clinton took four trips on Epstein’s plane: one to Europe, one to Asia and two to Africa, some of which included stops for work connected to the Clinton Foundation. As the Times noted, it’s unclear how many individual flights were made during each trip, which could account for the discrepancy.

The statement also said Clinton visited Epstein’s New York apartment once in 2002, during which he was accompanied by a staff member and security detail. Clinton also met with the financier, according to the statement, in the former president’s Harlem office in 2002.

Clinton denied knowing anything about Epstein’s alleged crimes and said in the statement that he hasn’t "spoken to Epstein in well over a decade." Prosecutors and other officials have not linked the former president to the accusations against Epstein.

Clinton is not the only high-profile person to have had contact with Epstein over the years. Documents show that President Trump rode on the financier’s private jet and reportedly partied with him in the late 1990s.

But Clinton has not been accused of having sex with minors connected to Epstein, as has been alleged about other famous men. Trump was accused of having sex with a minor in an anonymous 2016 lawsuit, which was dropped that same year and hasn't been corroborated. Trump does not currently stand accused of any sexual misconduct related to Epstein, according to recently released documents about the financier's alleged sex trafficking operation.

Despite all the available facts, the Clintons were still the main target for conspiracists following Epstein’s death. Why? One potential reason is the fact that there's already a lot of existing misinformation about them.

Correction, Aug. 13, 2019: An earlier version of this story incorrectly stated that Trump had not been accused of having sex with minors connected to Jeffrey Epstein.

PolitiFact, "No, a doctor was not murdered after criticizing the Clinton Foundation," Oct. 22, 2018

PolitiFact, "No evidence woman who died in home explosion was to testify against Clintons," July 18, 2018

The New York Times, "Bill Clinton and Jeffrey Epstein: How Are They Connected?" July 9, 2019