In the weeks after El Paso and Dayton, mass shooting rumors spread on Snapchat and iMessage
By Daniel Funke August 26, 2019

Erika Acosta wanted her friends and family to be careful.

So on Aug. 9, she shared a screenshot of an email purportedly from an assistant chief at the Horizon City (Texas) Police Department. It claimed a company that employs security guards at Walmart stores received a tip that there would be another mass shooting in the El Paso area at an unspecified date and time.

"If you don't have to go to Wal-Mart please dont (sic) go and please love your families and tell them you love them every day because you never know what can happen," Acosta wrote in the post.

The screenshot portrays a real email — an employee at the police department released it without authorization. But Chief Michael McConnell said in an Aug. 9 statement that the tip was "unverified third-hand information" and that authorities were "not aware of any threats at all."

It isn’t the only threat that’s gained traction on social media in the past few weeks.

After 31 people were killed in back-to-back shootings in El Paso and Dayton, Ohio, hoaxes aimed at flaming fears of more mass shootings have been shared far and wide on social media. And the same motivations that drove Acosta to share the unconfirmed Walmart threat have contributed to the spread of a resurgent form of misinformation: chain messages.

Unlike a lot of hoaxes about mass shootings, which gain steam through shares on Facebook and Twitter, rumors about additional shootings have spread on private messaging apps like Apple iMessage and Snapchat over the past few weeks. Many of those hoaxes were screenshotted and posted to more public social media platforms, where they got more attention.

PolitiFact found dozens of such screenshotted messages on Facebook, where they racked up thousands of shares. The posts were flagged as part of the company’s efforts to combat false news and misinformation on its News Feed. (Read more about our partnership with Facebook.)

Chain messages aren’t new; they are some of the internet’s earliest forms of misinformation and are particularly popular abroad. But misinformation that spreads on messaging apps is obscured from the public eye, making it harder for journalists to debunk it. And such platforms have faced less criticism for their role in spreading falsehoods than Facebook or Twitter.

Complicating matters is that there have been several actual shooting threats across the country since El Paso and Dayton. So we took a look at this recent trend and how it could affect the spread of shooting-related misinformation in the future.

People receive a text claiming there could be a potential mass shooting at a Walmart near them. The message claims the threat is based on information from "a police officer that is a family member" who "arrested a man for gun threats." The text claims the man has accomplices who plan to attack different stores, and asks recipients to "pass this on to family and friends."

PolitiFact found this exact same message, either in the form of screenshotted iMessages or a copy-pasted Facebook post, shared by people in at least six states. Several said in their posts that they were sharing the rumor out of an abundance of caution.

Similar fake warnings have been shared in at least 10 states across the South and Midwest, where some police departments have taken to social media themselves to address the rumors.

The Savannah, Ga. police department said in a Facebook post Aug. 15 that it had fielded questions from several citizens about a viral warning that there might soon be shootings at local Walmarts, and that people should avoid those businesses.

"This message has not been determined to be a credible threat in the Savannah area, and appears to be the results of a wild internet rumor," police said in the post.

Both Walmart and local law enforcement agencies say they’re monitoring the shooting threats, but that so far, they don’t appear to be credible.

In addition to Savannah, at least 10 other police departments across the country have publicly debunked the text rumor. Law enforcement in Greenwood, S.C. posted on Facebook Aug. 15 to say that it had received "numerous messages from citizens" about the message.

"Our local law enforcement is aware, but at this time everything leads to this being false," Greenwood County Sheriff Dennis Kelly said in the post.

The police department in Warsaw, N.C. shared another example of the hoax, which circulated on Snapchat, a platform where messages, photos and videos disappear a few seconds after users send them.

"PLEASE PEOPLE STOP SHARING MISINFORMATION !!!!!!!!!!!!!!!!!!!!!" the authorities wrote in a Facebook post Aug. 15. "As of today local law enforcement has no information regarding any plans by individuals or groups to target any of the Wal-Marts in our area."

While the viral chain message about Walmart was among the most widespread shooting threats we found, it wasn’t the only one to catch fire on messaging apps.

One text screenshot posted by someone in Texas claimed that Walmart had reached out to local paramedics to advise them to "be on high alert." Another chain message that circulated via iMessage in El Paso instructed people to stay away from all Targets and Walmarts because "one of the shooters" (there is only one El Paso suspect) told police there were more attacks coming.

Then there were more rumors that spread on Snapchat. 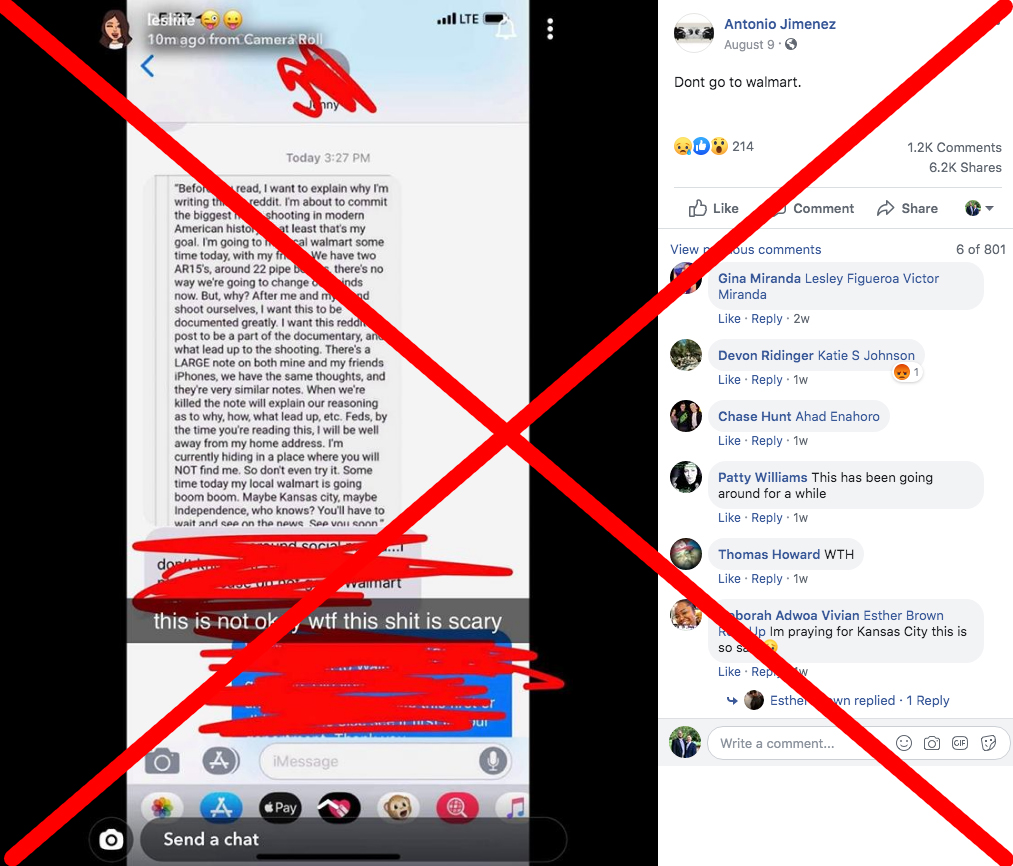 Jacob Becchina, a spokesman for the Kansas City Police Department, told PolitiFact in an email that authorities had partnered with the FBI to investigate the post. The police department addressed the rumor in a Twitter thread published Aug. 9.

"At that time we partnered with the FBI to investigate this claim," Becchina said. "No shooting or any violence occurred."

This isn’t the first time rumors about additional mass shootings have spread via Snapchat.

After the attack at Marjory Stoneman Douglas High School in Parkland, Fla., screenshots of a doctored Miami Herald article claiming there were potential shooting threats at other nearby schools started circulating among students in South Florida. The screenshots were shared so widely on Snapchat that parents called reporters and school officials asking if they were true.

Like chain emails, rumors on messaging apps spread rapidly across between different groups of people and states. And because most of the messaging happens in relative privacy and hoaxes are purposely vague, misinformation has the potential to live on long after it’s debunked.

BuzzFeed News noticed that trend while tracking misinformation on messaging apps immediately after the El Paso and Dayton shootings. And aside from the visibility problem, misinformation shared in private messages could also be more believable.

"On closed groups, you tend to know the people you share info with — might be family groups, high school friend groups, co-workers etc.," said Claire Wardle, executive chair of First Draft, a nonprofit that studies the spread of misinformation, in an email to PolitiFact.

"So the main type of misinformation you tend to find in these closed spaces are messages that are designed to ensure those you love stay safe, and people almost share to say, ‘This might not be true, but it's worth the risk, because your safety is more important.’"

As of publication, the shooting rumors we identified had tens of thousands of combined shares on Facebook. And that’s not counting how many times they were forwarded on messaging apps — a number that’s impossible to know due to the platforms’ privacy.

Abroad, that’s a problem endemic to platforms like WhatsApp, an encrypted messaging app where misinformation regularly spreads after breaking news events. And going into the 2020 election, Wardle wouldn’t be surprised to see more of it pop up in the U.S. — particularly rumors about immigration.

"As we already know in places like Brazil and India, these rumors are so difficult to stop because it's impossible to know they're circulating unless the public sends in tips," she said. "I am certain we are going to see real issues with this in 2020."

Have you received a message that you want us to check out? Screenshot it and send it to [email protected]

PolitiFact, "Police say this threat about Walmart shootings in Lubbock, Texas, is a hoax," Aug. 16, 2019

Poynter, "Here’s why fighting fake news is harder on WhatsApp than on Facebook," Oct. 5, 2017

Snopes, "Did Authorities Warn of More Attacks on Target and Walmart Stores in El Paso?" Aug. 6, 2019

The Washington Post, "El Paso suspect said he was targeting ‘Mexicans,’ told officers he was the shooter, police say," Aug. 9, 2019