President Donald Trump walks on the tarmac with the U.S. ambassador to European Union Gordon Sondland during his arrival on Air Force One on July 10, 2018, in Brussels, Belgium. (AP/Monsivais)

While Gordon Sondland was testifying about President Donald Trump and Ukraine, Trump told reporters on the White House lawn that he is not as close to the U.S. ambassador to the European Union as the testimony seemed to suggest.

'I want nothing': Trump speaks on the White House lawn as Ambassador Sondland testifies during the #impeachmenthearings https://t.co/mf44H4az2S pic.twitter.com/ADhNsyp8c1

"I don’t know him very well," Trump said. "I have not spoken to him much. This is not a man I know well. He seems like a nice guy though. But I don't know him well."

Sondland and Trump are hardly strangers. In October, Trump tweeted that he "would love to send Ambassador Sondland, a really good man and great American, to testify."

I would love to send Ambassador Sondland, a really good man and great American, to testify, but unfortunately he would be testifying before a totally compromised kangaroo court, where Republican’s rights have been taken away, and true facts are not allowed out for the public....

During Sondland’s testimony, Rep. Eric Swalwell, D-Calif., read Trump’s comments aloud and asked Sondland if he knew the president well. Sondland said they were not "close friends" but have a "professional, cordial working relationship."

.@RepSwalwell: "You donated a million dollars to his inaugural committee, is that right?"

Ambassador Sondland: "I bought a VVIP ticket to the inauguration."

Here, we’ll take a look at Sondland’s relationship with the president and the conversations they had concerning Ukraine.

Trump nominated Sondland to his diplomatic post to the European Union, and the Senate confirmed him in June 2018.

Before that, Sondland worked in the hotel industry. He founded Provenance Hotels.

RELATED STORY: Who is Gordon Sondland?

As Trump noted on the White House lawn, Sondland preferred other presidential candidates in 2016 and distanced himself from Trump, citing Trump’s criticism of a Gold Star family. At one point, Sondland withdrew his name from a fundraising event for Trump, according to Willamette Week, a local news website in Portland, Ore.

But Sondland also donated — through four limited liability companies — $1 million to Trump’s inaugural committee, according to the Center for Responsive Politics.

There are numerous photos of the Sondand and Trump together, including aboard Air Force One.

But Sondland said his conversations with Trump have been limited.

"I had occasional access when he chose to take my calls," Sondland said at another point.

Asked to estimate the number of conversations he has had with Trump, Sondland said the two have spoken roughly 20 times. He said he couldn’t be sure because the White House has not turned over all his call records; Sondland said several times he is not a notetaker. 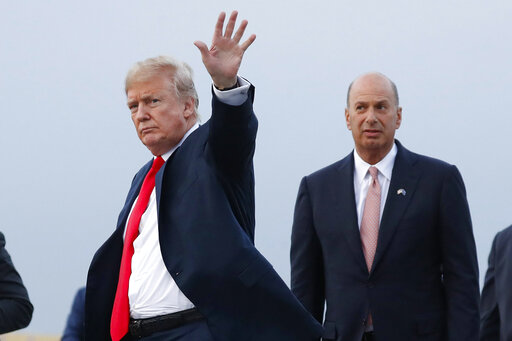 President Donald Trump is joined by Gordon Sondland, the U.S. ambassador to the European Union as he arrives at Air Force One in Brussels, Belgium, on July 10, 2018. (AP/Monsivais)

Sondland highlighted a few interactions with the president.

In person at the White House: Sondland said he helped brief Trump on Ukraine after Ukrainian President Volodymyr Zelensky's inauguration on May 23, when Trump instructed the room to "talk to Rudy," meaning Rudy Giuliani, Trump’s personal lawyer.

Call after Zelensky conversation: Sondland spoke with Trump by phone for five minutes on July 26 while at a restaurant with David Holmes, a diplomat at the U.S. embassy in Ukraine. Sondland said he could not recall its substance, but that he had no reason to doubt that it included the subject of investigations.

Holmes previously testified that he could hear both ends of the call, and Trump asked Sondland if Zelensky was prepared to announce the investigations he wanted. According to Holmes, Sondland told Trump that Zelensky was willing and that he "loves your ass."

"It sounds like something I would say," Sondland said in his Nov. 20 testimony, laughing. "That’s how President Trump and I communicate, a lot of four-letter words, in this case three-letter."

Phone call Sept. 9: Sondland also told Ambassador William Taylor, the top U.S. diplomat in Ukraine, that he had spoken with Trump by phone in a Sept. 9 text message.

After Taylor wrote that he thought it was "crazy to withhold security assistance for help with a political campaign," Sondland replied, "Bill, I believe you are incorrect about President Trump’s intentions. The President has been crystal clear no quid pro quo’s of any kind."

"I finally called the president, I believe it was on the 9th of September," Sondland later testified.

Sondland also said he might have spoken with Trump on Sept. 6, as well.

The Trump campaign declined to comment, and the White House did not respond to our inquiry by deadline.

Senate Committee on Foreign Relations, "Statement of Gordon D. Sondland, Nominee to be U.S. Ambassador to The European Union," June 21, 2018

PolitiFact, "Who is Gordon Sondland? What to watch for in his impeachment inquiry testimony," Nov. 19, 2019