Mitt Romney and the few other Republican lawmakers who have spoken out against Trump lately have become the targets of disinformation on social media. False Facebook posts and tweets about federal and local lawmakers who broke the party line have been shared thousands of times, with some talking points making their way onto radio and TV programs, too.

Those statements prompted several false attacks against Romney. One viral tweet that spread rapidly on Facebook falsely claimed that Romney’s son also worked for a Ukrainian oil company. The goal: sow doubt about Romney’s true intentions for speaking out against Trump.

Other attacks falsely claim the dissenting conservatives have voted in favor of impeaching Trump — even though no vote has been taken — while others try to implicate them in sham corruption scandals.

For Republicans, the choice on social media is clear: support the president or get smeared.

In a tweet published Oct. 6, Jack Murphy, co-founder of conservative news site TrendingPolitics.com, falsely claimed that one of the senator’s five sons does business in Ukraine. He made the same wrong allegation about the children of Biden, Pelosi and former Secretary of State John Kerry.

"Biden's son, Pelosi's son, Romney's son, Kerry’s son," he said in the tweet, which has since been deleted. "All are on the board of directors for energy companies doing business in Ukraine… Coincidence? No."

Only Biden’s son, Hunter, served on the board of a Ukrainian energy company, named Burisma, from 2014 to spring 2019. Burisma appointed Hunter Biden to its board of directors to help the company improve its corporate governance and adopt Western-style transparency.

His father, the former vice president and Democratic candidate running for president in 2020, has faced criticism for the appointment over a conflict of interest — particularly from Trump and his allies, who have tried to use it as a response to the impeachment inquiry. 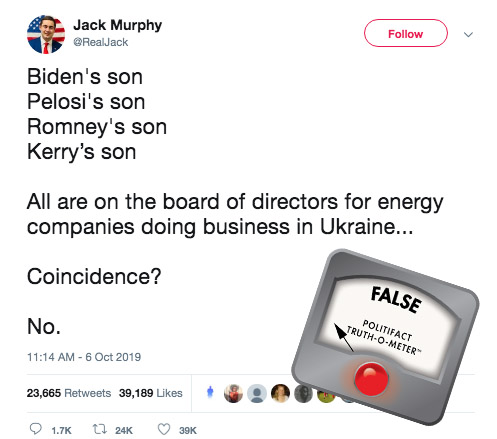 We found no evidence that any of Pelosi, Romney or Kerry’s sons have held similar positions. But Murphy’s claim took off, racking up tens of thousands of faves and retweets. (We asked him for his sources, but he didn’t respond.)

One popular post published Oct. 6 included a screenshot of Murphy’s post with the caption "probably needs to be investigated." It was shared more than 1,000 times and copied by several other Facebook posts.

Since they were published last month, false posts about Romney’s involvement in Ukraine have been copied and repurposed. We found scores of other questionable or inaccurate posts on CrowdTangle, a tool that tracks social media. Some of them even explicitly mentioned Romney’s criticism of Trump. We reached out to Romney’s press office for comment on that effort, but we haven’t heard back.

Experts told us this kind of disinformation is a common strategy to undermine a political message.

"This is an age-old tactic: undermine the critique by attacking the critic; attack the messenger, not the message," said Rebekah Tromble, an associate professor in the School of Media & Public Affairs at George Washington University, in an email. "The specific reason for disliking Romney doesn't need to stick, as long as the general sense that he's tainted in some way remains. And there's a great deal of evidence to suggest that, especially when communicated through anger and fear, that generalized negative sentiment does stick with people."

RELATED: The impeachment inquiry: What to expect from public hearings and beyond

It’s still unclear what kind of impact this kind of disinformation has had on voters, but some experts said it could be effective in fooling social media users since it makes claims about a topic that isn’t necessarily common knowledge.

"Misinformation tends to be more successful when people do not have existing prior knowledge on the topic," said Emily Vraga, an associate journalism professor at the University of Minnesota, in an email. "Very few people likely know anything about the children of these political leaders; someone suggesting that they work for overseas companies is certainly plausible. If there isn't evidence to debunk it immediately apparent, it's possible that people would come to believe it is true."

Counting votes before they hatch

Some Republicans in Congress, as well as state politicians, have faced similar smears for criticizing the president, or even if it was thought that they might criticize the president.

"Will Hurd, Fred Upton, Susan Brooks and Brian Fitzpatrick," read the post, which was later deleted. "Remember these faces next election!" 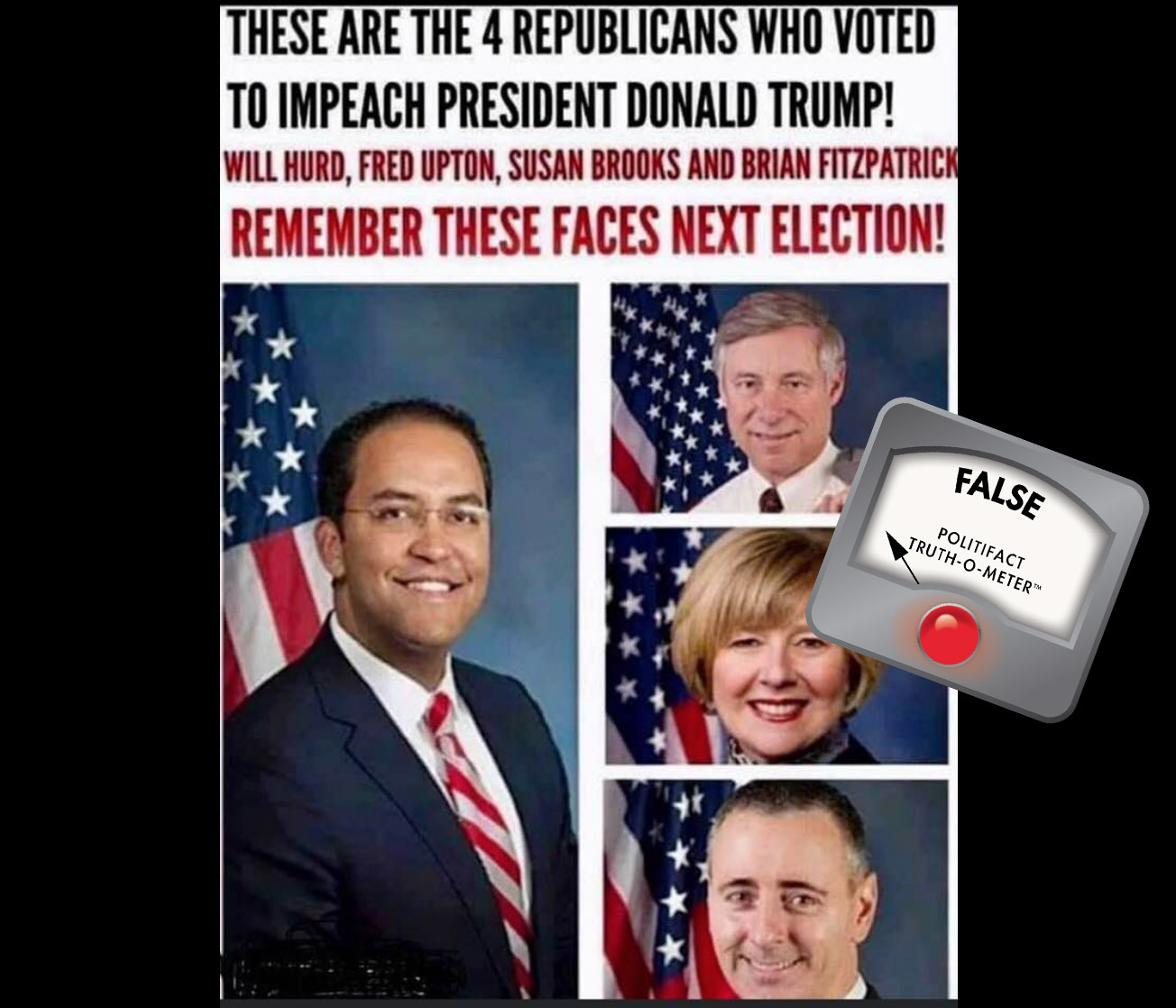 The House did vote on whether to authorize a formal impeachment inquiry against Trump, but it hasn’t voted on articles of impeachment. The resolution to start an inquiry passed in a 232-196 vote Oct. 31, and no Republicans voted for the measure.

The House has not voted on whether to impeach Trump. That will happen after hearings conclude, and after articles of impeachment are drafted.

Why single out Reps. Hurd of Texas, Upton of Michigan, Brooks of Indiana and Fitzpatrick of Pennsylvania? What they have in common is a vote for a measure criticizing Trump on a different subject.

In July, they were the only House Republicans who voted in favor of a resolution to rebuke the president’s comments that four minority Democratic congresswomen should "go back" to their ancestral countries. We reached out to each of the lawmakers’ press offices, but we haven’t heard back.

"Today’s resolution was targeted at the specific words that frankly are not acceptable from a leader in any work place large or small," Upton wrote in a July 16 Twitter thread. "If we’re going to bring civility back to the center of our politics, we must speak out against inflammatory rhetoric from anyone in any party anytime it happens."

Brooks, Hurd and Fitzpatrick made similar statements of support for the resolution. Several posts from popular conservative pages attacked the lawmakers’ decision to break with their party after they voted in favor of the resolution.

"Will Hurd (TX) Fred Upton (MI) Susan Brooks (IN) Brian Fitzpatrick (PA) Justin Amash [I](MI) They have made it clear they side with the Democrats," reads one post published July 16. "These people should all be primaried before the 2020 general election."

State politicians who speak ill of the president or in support of the impeachment inquiry have also been targeted by disinformation.

It is wrong on several fronts.

First, a governor has no voting role in impeachment proceedings. Second, there hasn’t been a vote to impeach Trump. And finally, the governor didn’t even say Trump should be impeached. 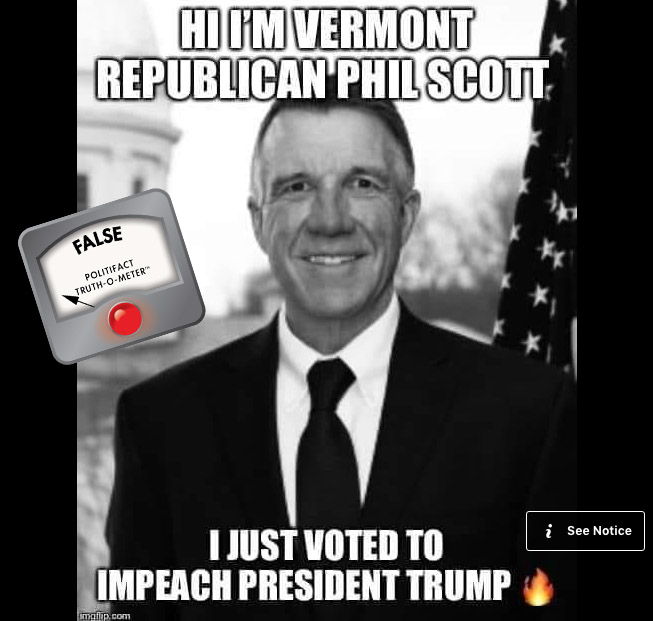 However, like Romney, Scott has spoken out in support of the House’s impeachment investigation.

"We have much more to learn and need to understand all the facts as this serious allegation is considered," he said in a statement to the Washington Post on Sept. 26. "It appears Congress will be starting an inquiry process, which I believe is appropriate."

The false post was published the day after Scott issued his statement. It took a step ahead of what Scott said about the inquiry to inaccurately claim that he "just voted" to impeach Trump, attracting the ire of conservatives on Facebook.

Experts told us that kind of disinformation could have a cooling effect on Republicans speaking out against the president or supporting the impeachment inquiry.

"If Republicans who express support for the impeachment investigation feel like they can’t express those beliefs because they’re afraid people will spread disinformation about them that could hurt their re-election chances, then that could increase the politicization of the impeachment process," said Emily Van Duyn, a postdoctoral fellow studying political communication at Stanford University, in an email.

RELATED: Could Donald Trump be impeached, removed and run for re-election? It’s possible

"In other words, if this disinformation strategy turns out to be a silencing tactic to keep Republicans in check, then it could make party-line support or opposition for the impeachment even stronger."

However, that same effect might not carry over to everyday Americans. Some experts are doubtful that disinformation targeting Republicans will dramatically shift the way most voters view impeachment.

See a questionable social media post about Republicans’ support for the impeachment inquiry or President Trump? Send it to [email protected].

Email interview with Rebekah Tromble, an associate professor in the School of Media & Public Affairs at George Washington University, Nov. 19, 2019

PolitiFact, "No, four Republicans did not vote to impeach President Trump," Nov. 15, 2019

The Washington Post, "Trump’s removal would require Republican dissidents. But those who speak out become targets of viral disinformation." Oct. 3, 2019