The Earth has rapidly warmed over the past century. Can politics slow it?

In this July 27, 2018, file photo, the Dave Johnson coal-fired power plant is silhouetted against the morning sun in Glenrock, Wyo. (AP)

Democratic candidates for president agree that global warming is one of the biggest challenges facing the United States.

Five of eight Democratic presidential candidates who are members of Congress have co-signed the Green New Deal, a House resolution introduced by Rep. Alexandria Ocasio-Cortez, D-N.Y. Other candidates support taxing carbon emissions, which are among the biggest contributors to global warming, but not the resolution itself.

It’s time to check up on some key questions surrounding climate change: How much warmer has the Earth really gotten over the past few decades? And what effect would American policy ideas like the Green New Deal actually have?

Scientists at NASA and the National Oceanic and Atmospheric Administration measure long-term changes to Earth’s climate in terms of "temperature anomalies." That figure indicates how much warmer or colder it was than a set reference value, which is often the average temperature of a specific time period.

The global average temperature has increased by approximately 1.4 degrees Fahrenheit since the early 20th century, according to data from NOAA based on temperatures measured over land and at sea.

Research from NASA’s Goddard Institute for Space Studies supports that finding. The average surface temperature of the planet has risen by about 1.62 degrees Fahrenheit since the late 19th century, the institute has found. Most of that warming happened in the past 35 years.

The period from 2015 to 2018 saw the highest average global temperatures since modern measurements began in 1880, according to NOAA. And July 2019 was the hottest month ever recorded.

"The average global temperature in July was 1.71 degrees F above the 20th century average of 60.4 degrees," the agency wrote in a news release.

The majority of scientists agree that the reason why has to do with human activity — namely greenhouse gas emissions, which trap heat from the sun in the earth’s atmosphere.

One of the most widely cited sources on global warming’s causes and effects is the Intergovernmental Panel on Climate Change, a body of the United Nations. Its most recent assessment from 2014 found that human contributions to climate change are evident.

"It is extremely likely that more than half of the observed increase in global average surface temperature from 1951 to 2010 was caused by the anthropogenic increase in (greenhouse gas) concentrations and other anthropogenic forcings together," the panel wrote in a summary of the report.

There is no tipping point

The average surface temperature of Earth has risen more rapidly over the past few decades than at any other time in modern history. And there are a variety of benchmarks at which the effects of climate change are expected to get worse.

But experts say there is no one temperature that will signal widespread catastrophe.

"These temperature limits that are being discussed are more akin to speed limits on a curve rather than tipping points," said Gavin Schmidt, director of the NASA Goddard Institute for Space Studies, in an email to PolitiFact. "Your risks don’t noticeably increase in going around the bend at 46 mph as opposed to 44 mph, but you still understand that the faster you go, the higher the risk of something catastrophic."

One of those speed limits is 1.5 degrees Celsius (2.7 degrees Fahrenheit). In October 2018, the Intergovernmental Panel on Climate Change published a special report on the increase of global temperature above that temperature and how it would impact ecosystems. The report estimates the Earth "is likely to reach 1.5 degrees Celsius between 2030 and 2052."

That change could alter regional weather patterns. Some examples from the panel’s top findings include an increase in average temperature (both on land and at sea) and hotter extremes.

But the effects would be worse at 2 degrees Celsius (3.6 degrees Fahrenheit). A 2016 study found the difference between 1.5 and 2 degrees Celsius could be substantial, with major impacts on things like sea level rise, coral bleaching crop yields — effects experts say are already happening.

And temperature is just one way to measure the procession of climate change.

"Overall, the projections of rise in the mean surface temperature of the earth appear to have been fairly accurate, dating a back a couple of decades," said John Reilly, co-director of the Joint Program on the Science and Policy of Global Change at the Massachusetts Institute of Technology. "(But) the global mean surface temperature does not capture all aspects of climate, and the global climate models do not predict extreme events and other aspects of climate change accurately — e.g. they do not simulate the formation of tropical storms at all."

"So in many ways we are seeing changes in climate at these scales that is beyond what was predicted."

The Paris Climate Agreement, a pact signed in 2016 by nearly 200 countries to voluntarily reduce their greenhouse gas emissions, is aimed at preventing the Earth from warming by 2 degrees Celsius.

The United States, the second-highest producer of carbon emissions in the world, would have been required to cut its emissions by nearly 30% by 2025 under the agreement. But in June 2017, President Donald Trump withdrew the United States from the deal.

Experts say the impact of that withdrawal could be mixed.

"Countries need to know that other countries are stepping up, and we have stepped down, making international and other countries’ commitments less likely to be effective and enduring," said Sean Hecht, co-executive director of the Emmett Institute on Climate Change and the Environment at the University of California at Los Angeles. "(But) the on-the-ground impact of the Paris decision isn’t as significant, since the agreement wasn’t a policy." 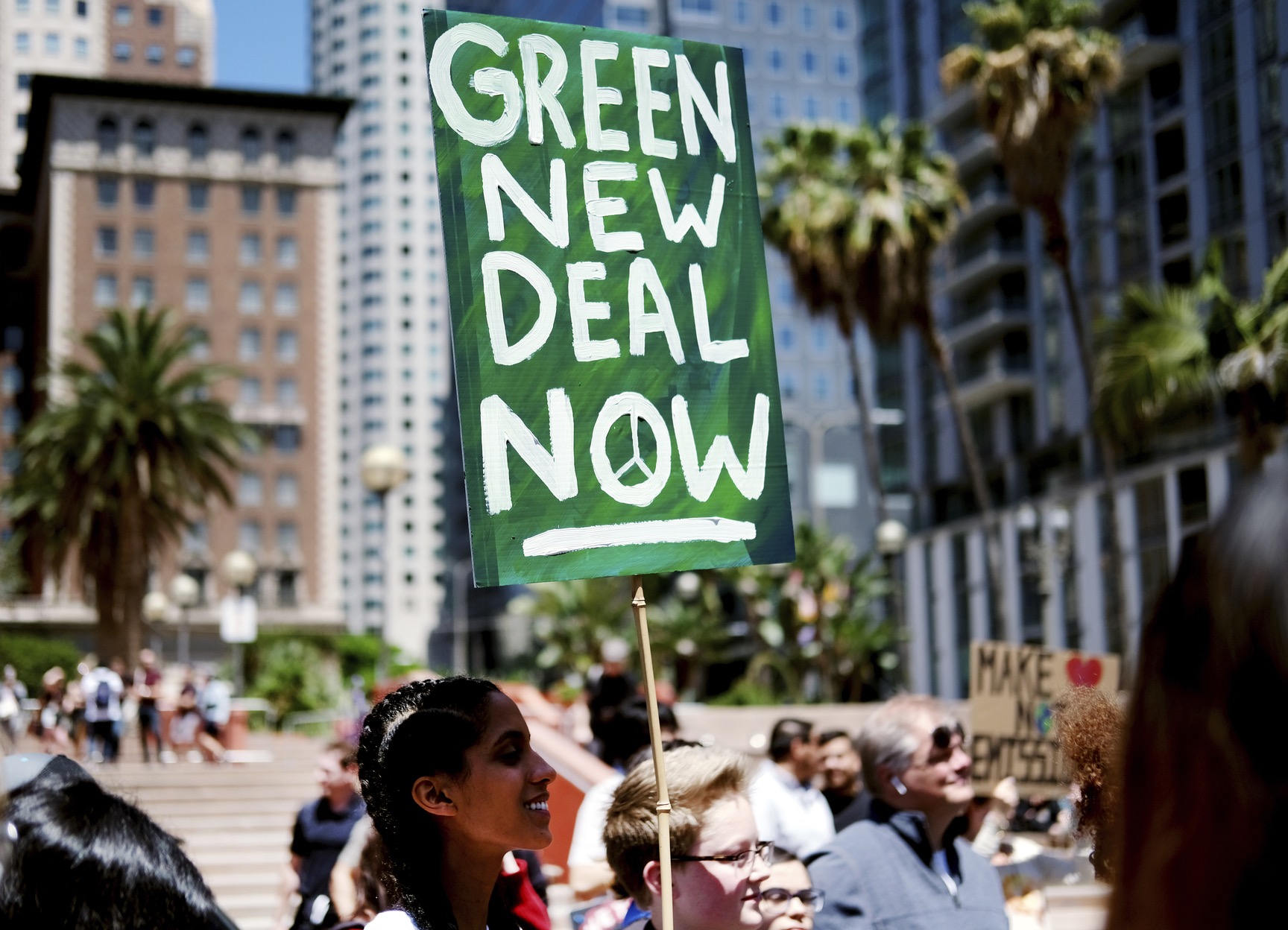 Climate change activists holding signs join in on a rally supporting the "Green New Deal" in Pershing Square in downtown Los Angeles on May 24, 2019. (AP)

Some domestic policies seek to recommit to the spirit of the Paris Climate Agreement. The Green New Deal’s signature goal is to achieve net zero missions by 2030. If achieved, the deal could avoid global warming by 1.5 degrees Celsius, Reilly said.

But that prospect is unlikely.

"Few if any serious analysts think it is possible to achieve the Green New Deal objective of a net zero economy by 2030," Reilly said. "That would depend on the rest of the world taking similarly drastic steps to reduce greenhouse gases."

While more than 60 countries are aiming to reduce carbon emissions to net zero by 2050, the New York Times reported that they are not among the biggest carbon emitters, China, the U.S. and India.

Another one of the most common climate change policies among Democratic candidates is a tax on greenhouse gases, including carbon dioxide. Six candidates have proposed such a plan, which would most affect energy-intensive industries.

Some economists have said a carbon tax would be one of the most efficient ways of reducing emissions in the short term.

Ten states already have carbon pricing programs in place, according to the Center for Climate and Energy Solutions, as well as countries like Mexico and Canada. They’re not without controversy; critics say a carbon tax would disproportionately affect low-income households and fail to dissuade companies from extracting fossil fuels.

But in terms of slowing the progression of climate change, something may be better than nothing.

"We already are having impacts, and will continue to have them," Hecht said. "At the same time, every bit of (greenhouse gas) reduction/reduction in global temperature rise will help, by making it less onerous to adapt and by forestalling negative effects."

Email interview with John Reilly, co-director of the Joint Program on the Science and Policy of Global Change at the Massachusetts Institute of Technology, Oct. 16, 2019

Email interview with Sean Hecht, co-executive director of the Emmett Institute on Climate Change and the Environment at the University of California at Los Angeles, Oct. 16, 2019