In this July 29, 2020, file photo House Speaker Nancy Pelosi of California speaks at a press conference on Capitol Hill in Washington. (AP)

As a partisan fight over the White House coronavirus task force continues to play out in Washington, an altered video that makes it look like House Speaker Nancy Pelosi is drunk has gone viral on Facebook.

The video, which was published July 30, has more than 2 million views. It shows Pelosi drinking from a plastic cup and slurring her words as she asks a reporter to clarify a question at a press conference.

"This is unbelievable, she is blowed out of her mind," the poster wrote in the caption, "I bet this gets taken down!"

The video was flagged as part of Facebook’s efforts to combat false news and misinformation on its News Feed. (Read more about our partnership with Facebook.) 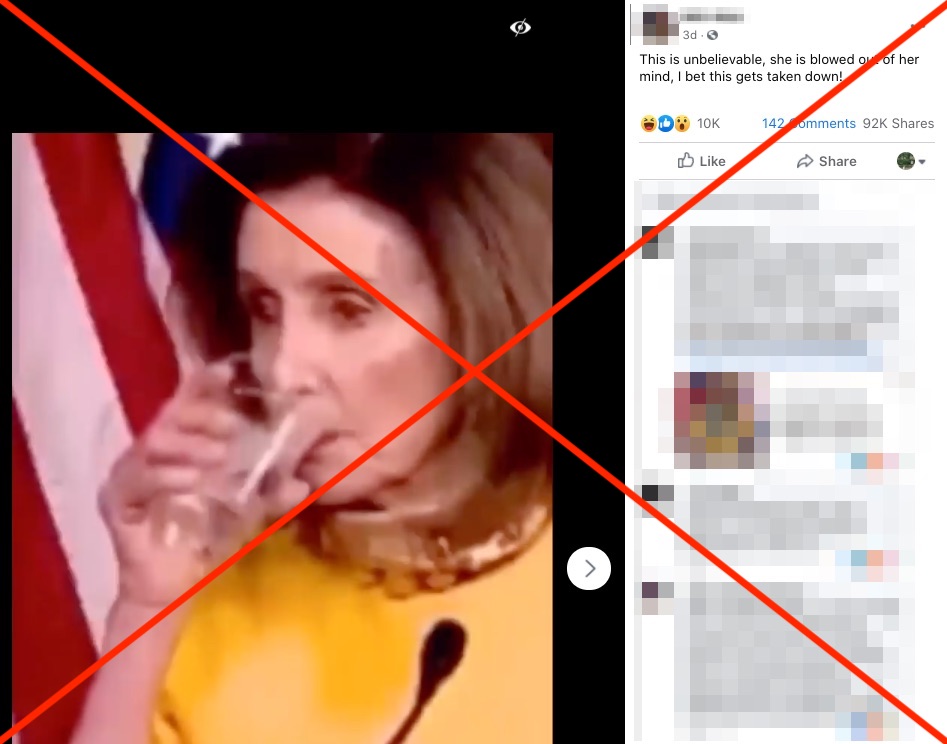 But the video is doctored — Pelosi’s speech was slowed down to make it look like she was drunk at the news conference.

The footage comes from the speaker’s weekly press conference on May 20, during which she answered a question about President Donald Trump suggesting on Twitter that MSNBC host Joe Scarborough had committed murder (a claim we’ve rated Pants on Fire).

In the unaltered video, Pelosi’s speech is not slurred.

A graphic at the end of the altered video suggests that it was originally published on TikTok. CNN reported that the video-sharing platform removed the video, which received 37,000 views, for violating its "synthetic media policy."

For now, however, the manipulated clip of Pelosi slurring her words remains on Facebook. It’s the latest example of misinformation that attempts to portray the first female speaker of the house as a drunk.

Since Pelosi was re-elected in January 2019, PolitiFact has debunked several false claims about her being intoxicated. The hoaxes range from out-of-context photos that make her appear inebriated to deliberately manipulated videos to make it sound like she’s slurring her words.

The TikTok clip is similar to previous manipulated videos, and it comes as Pelosi and Trump trade barbs over the president’s handling of the COVID-19 pandemic. But the persistence of false claims about Pelosi being intoxicated is ironic, considering the speaker is not known to drink.

We requested an interview with Pelosi for this story. Her office declined, but spokesman Drew Hammill told us in an email that the speaker doesn’t drink. (Pelosi’s office told us she doesn’t drink for a similar fact-check in 2010.)

That lines up with what others have said about Pelosi over the years. After a manipulated video of the speaker slurring her words went viral on social media in May 2019, her daughter, Christine Pelosi, tweeted a rebuttal.

"Republicans and their conservative allies have been pumping this despicable fake meme for years! Now they are caught," she said. "#FactCheck: Madam Speaker doesn’t even drink alcohol!"

RELATED: Viral video of Nancy Pelosi slowed down her speech

We reached out to each Democratic leader in the House to get their thoughts on the recurring drunk hoaxes, but we didn’t hear back.

Experts said portraying Pelosi as a drunk is a simple way to attack her credibility and spread misinformation.

"For those who want to damage Pelosi's reputation, this is low-hanging fruit," said Rebekah Tromble, associate director of the Institute for Data, Democracy and Politics at George Washington University, in an email. "It's easy to pair this message with an unflattering picture and create a lasting memory of the speaker."

False claims that allege Pelosi is intoxicated can spread more quickly than other kinds of disinformation because Pelosi’s many public appearances mean there’s a lot of source material for misinformers to use to create new hoaxes.

"There's a ‘turtles all the way down’ quality to these claims," said Ethan Porter, an assistant professor at the George Washington University School of Media and Public Affairs, in an email. "Through their repetition, peddlers of false news can point readers back to earlier (false), stories which made the same (false) allegations."

False claims about Pelosi being drunk in public have been around for as long as she’s been in office.

While that kind of misinformation has been consistently debunked, falsehoods that assert Pelosi is a drunk could have a lasting impact on those who see them.

"The continued pushing of this one Nancy Pelosi narrative is not surprising," said Claire Wardle, the U.S. director of First Draft, a nonprofit organization that tracks and studies misinformation, in an email. "The way our brains work means that familiarity and repetition are two extremely powerful factors for how we process information. If you've heard something before you're more likely to consider it as true."

RELATED: A voters’ guide to combating misinformation ahead of the election and beyond

Another reason these kinds of false claims have staying power: They tap into age-old stereotypes about female politicians.

Email interview with Ethan Porter, assistant professor at the George Washington University School of Media and Public Affairs, May 28, 2020

Email interview with Rebekah Tromble, associate director of the Institute for Data, Democracy and Politics at George Washington University, May 28 and Aug. 3, 2020

Journal of Broadcasting and Electronic Media, "A ‘Presidential Look’? An Analysis of Gender Framing in 2016 Persuasive Memes of Hillary Clinton," June 21, 2019

PolitiFact, "Viral video of Nancy Pelosi slowed down her speech," May 24, 2019