In this Aug. 2, 2018, file photo, David Reinert holding a Q sign waits in line with others to enter a campaign rally with President Donald Trump in Wilkes-Barre, Pa. (AP)

The photos are hard to look at.

In one, former Vice President Joe Biden appears to bite a little girl’s cheek. In another, former President Barack Obama sits in a boat alongside actor George Clooney and a small child. The image is juxtaposed with a photo of a human trafficking victim.

Other photos published on social media include long lists of celebrities and public figures — including the Clintons, Oprah and Justin Bieber — with allegations of sexual misconduct.

The images were flagged as part of Facebook’s efforts to combat false news and misinformation on its News Feed. (Read more about our partnership with Facebook.) Several fact-checkers have debunked them. 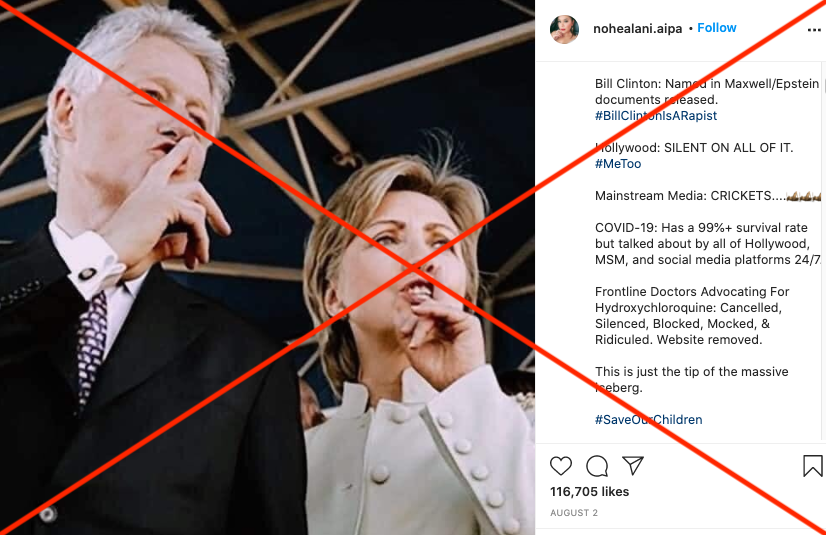 The posts are just a few examples of unproven pedophilia accusations that have recently gone viral with #SaveTheChildren — a seemingly innocuous and philanthropic hashtag that is in fact linked to years-old unproven sex trafficking and pedophilia conspiracy theories involving politicians and celebrities.

Over the past month, #SaveTheChildren has received tens of millions of likes, shares and comments on Facebook and Instagram, according to CrowdTangle, a social media insights tool owned by Facebook. Search interest in the phrase ballooned during the first week of August, and people in several cities across the country have held in-person rallies to promote the movement.

But what exactly is #SaveTheChildren, and why has it recently taken off on social media? Here’s what you need to know.

It may sound philanthropic, but #SaveTheChildren isn’t tied to a humanitarian organization that bears the same name.

Save the Children is a London humanitarian organization that aims to improve the lives of children around the world, including work against child trafficking.

But Save the Children has nothing to do with the viral hashtag.

"In the United States, Save the Children is the sole owner of the name ‘Save the Children,’ which is a registered trademark," the organization wrote in an Aug. 7 statement. "While many people may choose to use our organization’s name as a hashtag to make their point on different issues, we are not affiliated or associated with any of these campaigns."

Many Facebook posts using the hashtag confirm this. In fact, on Aug. 10, several widely shared posts called for people to use another hashtag altogether. 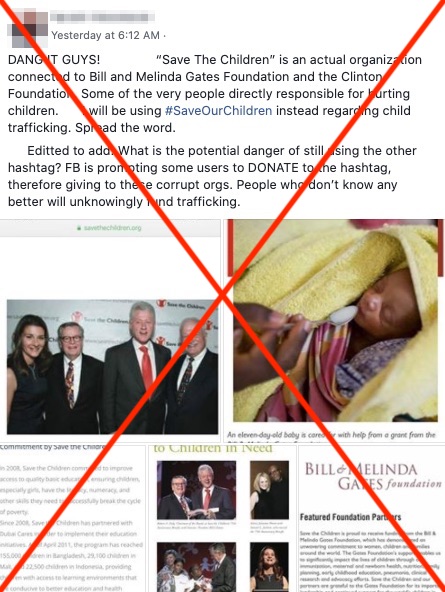 "DANG IT GUYS!" reads one post with more than 14,000 shares. "‘Save The Children’ is an actual organization connected to Bill and Melinda Gates Foundation and the Clinton Foundation. Some of the very people directly responsible for hurting children."

"I will be using #SaveOurChildren instead regarding child trafficking. Spread the word."

There is no evidence that the Gates or Clinton families are involved in child sex trafficking. Those baseless claims are linked to a conspiracy theory that was born during the 2016 presidential campaign.

If Save the Children isn’t responsible for the recent surge of posts about child sex trafficking, who is? All evidence points to a mix of conspiracy theorists and concerned social media users.

Posts with #SaveTheChildren and #SaveOurChildren spiked on Facebook during the last week of July and the first of August.

The posts started circulating in QAnon and Pizzagate Facebook groups in July before spreading to conservative sources like PragerU, according to CrowdTangle. More recently, users with large followings — such as evangelical internet personality Joshua Feuerstein, actor Cung Le and Mike the Cop — gave #SaveTheChildren a boost.

As the hashtag spread, some Facebook users claimed Aug. 5 that the platform was blocking posts with #SaveTheChildren.

Facebook told Snopes it did temporarily block the hashtag because it was surfacing "low-quality content," but that it has since been restored. We were able to share a post with #SaveTheChildren without a problem.

The spike in posts aligned with World Day Against Trafficking in Persons, which the United Nations recognized on July 30. But #SaveTheChildren has been used in conjunction with terms associated with QAnon and Pizzagate since at least early 2017, according to an advanced Twitter search. Both conspiracy theories make baseless claims about sex trafficking.

The main message of QAnon, which evolved from the 2016 Pizzagate conspiracy theory and takes its name from a 4chan user named "Q" — a reference to a security clearance needed for high-level government information — is unclear. But many followers believe in "The Storm," which is when they claim Donald Trump and special counsel Robert Mueller will start arresting former presidents and other members of the "Deep state" for their involvement in pedophile rings, among other offenses.

While QAnon started as a fringe conspiracy theory, it has recently become more widespread.

RELATED: QAnon and Donald Trump rallies: What's that about?

NBC News reported Aug. 10 that an internal Facebook investigation has found thousands of groups and pages with millions of members and followers dedicated to QAnon. On Aug. 11, Marjorie Taylor Greene, a QAnon supporter, won the House primary election in Georgia’s 14th Congressional District.

"The QAnon community repurposes materials and memes that are floating around. Its main narrative focuses on pedophile allegations that are almost entirely unsubstantiated," said Mark Fenster, a law professor at the University of Florida and a conspiracy theory expert, in an email. "It was probably only a matter of time before its followers adopted that hashtag, especially given the organization’s longstanding renown."

Why have conspiracy theorists used #SaveTheChildren to more aggressively spread their beliefs? It has to do with branding.

"The whole danger of this whole thing is that it’s such an effective entrypoint for QAnon and Pizzagate’s style of thinking," said Travis View, co-host of the QAnon Anonymous podcast, in a recent episode. "There’s no decoding involved. It doesn’t ask you to go through the Podesta emails, it doesn’t ask you to read the Q drops — it asks you to recognize that children are being harmed and trafficked and then get outraged about it."

The posts are also tied to a rash of other recent conspiracy theories that seek to tie prominent Democrats and celebrities to child sex trafficking.

All of those claims are baseless. But since they deal with a repugnant action like child sex trafficking, they have a good chance of going viral.

That was the case when a conspiracy theory about Wayfair reached millions of people on social media in mid July. The theory falsely claimed that the online furniture store was shipping children to pedophiles inside expensive, industrial-grade cabinets. It spread widely on platforms popular with teenagers and young adults, such as Instagram and TikTok.

Experts say allegations about child molestation or sex trafficking aren’t uncommon in conspiracy theories. In fact, they can be foundational to their false claims.

"The panic around widespread and prevalent sex trafficking by certain groups (sometimes the rich and politically powerful, sometimes members of certain religions) has been around for a very long time," Fenster said. "Sexual deviance is often viewed as part of, even a central motivation for, nefarious conspiracies."

Check Your Fact, "FACT CHECK: DOES THIS PICTURE SHOW JOE BIDEN BITING A CHILD ON THE CHEEK?" April 30, 2020

Email from Mark Fenster, law professor at the University of Florida, Aug. 11, 2020

KRCR, "The national #SaveTheChildren campaign made its way to Redding," Aug. 8, 2020

Lead Stories, "Fact Check: Tom Hanks Did NOT Flee To Greece To Hide From Epstein-Related Prosecution; Pedophilia is NOT Considered A 'Disability' In Greece," Aug. 6, 2020

PolitiFact, "No, a list of sex cases on Facebook is not from unsealed Ghislaine Maxwell records," Aug. 6, 2020

WSAV, "Crowd raises awareness for missing, exploited children at ‘Save the Children’ march in Savannah," Aug. 9, 2020