Jeanine Pirro suggests, without evidence, that Biden won’t be on Election Day ballot

There’s no evidence that the final ballot won’t include Biden. The presumptive Democratic nominee for president made his first public appearance with new running mate Sen. Kamala Harris moments before Pirro’s remark.

Pirro’s conspiracy echoed attacks from President Donald Trump’s campaign, allies and supporters on social media, some of whom have said Biden will carry out the agenda of his party’s progressive wing or suggested that he will hand over the reins to a vice president before his term ends.

The rumors started even before Biden named his vice presidential pick, and they followed months of attacks focused on Biden’s age and health. If elected, Biden, 77, will become the oldest American president to take office, a title Trump currently holds.

Pirro’s comments came on "The Five" after co-host Jesse Watters asked about a Rasmussen poll that found more than half of likely voters surveyed believe Biden won’t finish his term.

The show’s other personalities also jumped in. Watters clarified that "we certainly don’t hope that anything happens to Vice President Joe Biden anytime soon," and Baier noted that Biden will almost certainly represent the Democratic Party, whose nomination he clinched in June.

Fox News pointed to Baier’s response when we reached out for comment.

"Last night was the last Democratic primary in Connecticut, where 60 delegates went to Joe Biden. So he is going to be the nominee," Baier said. "Next week, we’re going to see the official nomination. You’re saying that he doesn’t make it all the way. The bumper stickers are already printed. It’s Biden-Harris. He’s going to be the nominee as of next week."

Pirro attempted to clarify her comments but offered no further explanation. She said she wished him "all good health" and knew that "he’s got the numbers" to earn the nomination.

We wanted to take a closer look at these lines of attack from GOP supporters. The Biden campaign and Democratic National Committee did not respond to our inquiries.

Pirro is speculating with no evidence

Larry Sabato, the founder and director of the University of Virginia’s Center for Politics, said Pirro’s remarks about Biden were "in very poor taste."

"Biden is 77, not 87 or 97," said Sabato, who also runs Sabato’s Crystal Ball, a newsletter for political analysis and forecasting. "To suggest that a man who is in reasonably good shape, eats well, exercises, has a stimulating job and a mission in life is on his deathbed is outrageous."

Other Trump allies and Fox News personalities, including "The Five" co-host Greg Gutfield, also suggested that Biden will drop out of the race before Election Day.

"When he drops out, does she move to become the ‘P’ or does she stay at ‘VP’ and they put something else in there?" Gutfield said Aug. 11.

Tim Murtaugh, the Trump campaign’s communications director, said in a live stream that with Biden’s pick, "He’s essentially entered into a political living will now because he's made it clear that he plans to turn the reins over very quickly."

And Ronna McDaniel, the chairwoman of the Republican National Committee, responded to Harris’ selection by claiming on Twitter that "Biden didn’t just select a VP candidate, he chose the person who will actually be in charge if he were somehow able to win."

"Kamala Harris is her party’s de-facto nominee for president," she added days later.

Like Pirro, some social media users have taken those claims a step further. One Facebook post said "establishment Democrats" had "orchestrated" a plot to have the vice president "take over quickly." The July 23 post has received more than 68 thousand shares on the platform.

"There are no intentions for a Biden presidency," it said, arguing that Democrats will "use Biden to try and get the middle of the road vote so they can install a hard leftist shortly thereafter."

But there’s no evidence that Biden intends to bow out of the White House. Biden won 42 state contests in a long primary election that saw more than 20 candidates join the fray. He will enter the party’s convention with 2,671 pledged delegates, according to the Associated Press. On Aug. 14, he signed official documents related to accepting the party’s nomination.

He was not hand-picked by the establishment as a front for his party’s more liberal members.

How liberal is Harris?

Since Biden’s announcement, Trump and his allies have characterized Harris as both a staunch liberal and someone who isn’t liberal enough. Former Trump campaign manager Brad Parscale described her selection on Twitter as "Bernie bros get burnt."

On the same day that McDaniel tweeted about Harris’ "extreme positions," the RNC blasted out a memo to reporters highlighting instances of progressive activists and others expressing disappointment in Harris’ record. The subject line: "Liberals revolt against Biden, Harris ticket."

The Trump campaign, meanwhile, called her "proof that Joe Biden is an empty shell being filled with the extreme agenda of the radicals on the left." 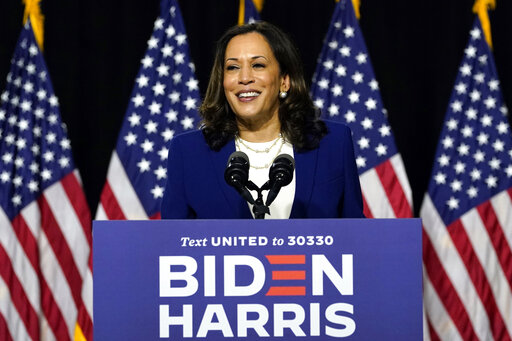 One ranking of senators from GovTrack, a nonpartisan organization that monitors congressional legislation, ranked Harris as the most liberal of all senators in 2019 based on the legislation she co-sponsored and the other co-sponsors of those bills.

Voteview.com, a site created by political scientists, similarly scored Harris as more liberal than 99% of the Senate, while CQ Roll Call calculated that the percentage of votes in which Harris voted the same way as the majority of her party’s members was over 99%.

Harris co-sponsored the Green New Deal and has lent support for a $15 minimum wage, universal background checks and an assault weapons ban.

But her mixed record as a prosecutor has drawn criticism from activists who said she was too cautious on certain issues, and she took some moderate positions during the primary compared with ideological progressives such as Sens. Bernie Sanders and Elizabeth Warren.

"I’m not trying to restructure society," Harris told the New York Times in 2019. "I’m just trying to take care of the issues that wake people up in the middle of the night."

Sabato, the director of the University of Virginia’s Center for Politics, said that in a climate of ideological polarization, the distinction "between a left-progressive and someone who is merely liberal" can be argued endlessly. But it isn’t something every voter has time to sort out.

"As far as Kamala Harris is concerned, she’s a mainstream Democrat as the party is constituted today," Sabato added. "And that means liberal."

The Associated Press, "Radical or moderate? Trump paints Democratic ticket as both," Aug. 13, 2020

The Sacramento Bee, "How liberal is she? Watchdog groups rate the Senate record of Kamala Harris," Aug. 12, 2020

Email interview with Larry Sabato, founder and director of the University of Virginia’s Center for Politics, Aug. 14, 2020