President Donald Trump, with Department of Health and Human Services Secretary Alex Azar to his right, speaks during a press conference on the coronavirus on Feb. 26, 2020 in Washington. (AP/Ceneta)

President Donald Trump’s sunny attitude toward the White House’s response to the 2019 coronavirus was on display during his Feb. 26 press conference, when he downplayed the threat posed by the virus despite his own health experts’ stern warnings about the outbreak.

At one point, the president said the virus might not hit the United States, contradicting a warning from the top official at the Centers for Disease Control and Prevention, who said the day before that it’s now only a matter of when and how far the virus will spread.

As of Feb. 27, the 2019 coronavirus had spread throughout China and to 46 countries outside of China, infecting more than 82,200 people globally, according to the World Health Organization.

The WHO declared the virus an international public health emergency in late January, and the organization’s director-general has since called it a "potential pandemic."

Much remains unknown about the virus as it continues to spread.

"I cannot overestimate the volume of new information every hour of the day," said Myron Cohen, director of the Institute for Global Health and Infectious Diseases at the University of North Carolina at Chapel Hill’s School of Medicine.

What Trump got mostly right

The current strain of coronavirus was first detected in December in Wuhan, China. It’s one of seven types of coronaviruses that infect humans, according to the CDC.

Most cases of the new virus have resulted in mild symptoms, but the WHO has estimated that roughly 1 in every 6 people have become "seriously ill," and about 2% have died. According to the organization’s Feb. 27 situation report, the death rate has now crept up to almost 3.5%.

The vast majority of infections have occurred in China. During his press conference, Trump credited his policies with keeping Americans mostly safe to this point.

"We closed up our borders to flights coming in from certain areas, areas that were hit by the coronavirus and hit pretty hard," he said. "And we did it very early. A lot of people thought we shouldn’t have done it that early, and we did, and it turned out to be a very good thing."

On Jan. 31, the Trump administration placed a temporary ban on travel into the United States for immigrants and nonimmigrants who had recently been "physically present" in China, with exceptions made for U.S. citizens and permanent residents and their family members.

The move followed announcements from a number of airlines that they would suspend all flights between the United States and China while the outbreak ran its course.

Trump also accurately cited an October study from Johns Hopkins University that ranked the United States No. 1 in the world in terms of the country’s preparedness for a pandemic, although the study also found that "no country is fully prepared for epidemics or pandemics."

What Trump exaggerated or got wrong

Not everything Trump said was in line with what’s really happening, however. Throughout his press conference, Trump claimed that 15 Americans had contracted the new virus, even though the CDC's total count was then at 60 and is now up to 61.

"We have a total of 15 people, and they’re in a process of recovering with some already having fully recovered," Trump said.

The president seemed to be referring to the 15 people who were diagnosed in the United States. He later called them "the original 15."

But that left out the patients who were repatriated with the virus from abroad, including three people who returned from Wuhan and 43 who fell ill on a cruise ship, according to the CDC.

The president also made repeated references to the flu, at times suggesting that the flu was much worse than the new coronavirus, and at other times claiming the two were alike.

But even so, Trump’s annual range is above what the CDC has reported.

At another point, Trump said the United States is "rapidly developing a vaccine" for the coronavirus and would "essentially have a flu shot for this in a fairly quick manner."

But Anthony Fauci, director of the National Institute of Allergy and Infectious Diseases, said in the same press conference that a vaccine was likely a year to a year and a half away. That would still be quick, but not fast enough to help manage the current outbreak.

Now more than ever, it’s important to sort fact from fiction. Please donate to support our mission. Membership.politifact.com

Trump also drew comparisons to the flu while answering a question about his criticism on the the U.S. response to the Ebola outbreak years ago under President Barack Obama.

"Ebola, you disintegrated, especially at the beginning," Trump said. "You got Ebola, that was it. This one is different, much different. This is a flu. This is like a flu."

The 2019 coronavirus is a respiratory virus like the flu, but it’s "not related to influenza," said Richard Watanabe, professor of preventive medicine at the University of Southern California.

Ebola, which broke out starting in 2014 and killed more than 11,000 people in the West African nations of Guinea, Liberia and Sierra Leone, is also not the automatic death sentence Trump made it out to be.

Trump was likely referring to the late stages of an Ebola infection, when the runaway virus causes internal bleeding and cuts down the body’s ability to produce blood clotting agents.

But when people get treatment in time, their chances of survival increase. There were two deaths among the 11 cases treated in the United States during the Ebola outbreak, and the only two people who caught the virus while in the United States — both nurses — recovered fully.

That said, at this point, the Ebola virus seems deadlier than the coronavirus — although Ebola is much more difficult to catch, since it is only transmitted through bodily fluids.

Trump said contradictory things about the virus’s spread, often declaring victories where public health officials had said there was still room for concern.

The president insisted that the number of cases in the United States is "going very substantially down, not up," and he also claimed the same success for China.

"If you can count on the reports coming out of China, that spread has gone down quite a bit," he said. "As opposed to getting larger, it’s actually gotten smaller."

Despite the president’s confidence, his comments don’t square with what public health officials have been saying about the coronavirus. 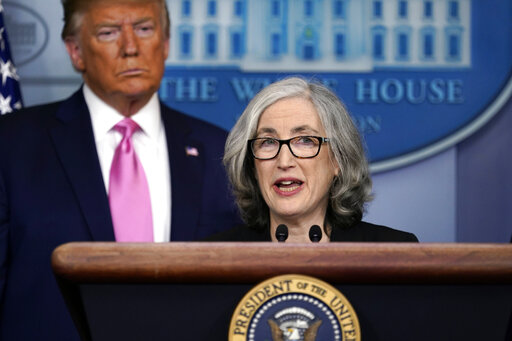 Anne Schuchat, principal deputy director of the Centers for Disease Control and Prevention, speaks during a press conference on the coronavirus on Feb. 26, 2020, in Washington. (AP/Vucci)

Trump said that "because of all we’ve done, the risk to the American people remains very low."

The local risk in most U.S. communities seems relatively low, but that could change. The same day as Trump’s press conference, the CDC announced that a California patient tested positive for the coronavirus, marking the first U.S. case in which the source of infection was unclear.

"The risk is unknown at this point," said Cohen, the director of the Institute for Global Health and Infectious Diseases at the University of North Carolina at Chapel.

Trump has also claimed on multiple occasions that the coronavirus will likely "go away in April."

"A lot of people think that goes away in April with the heat," he said Feb. 10 during a White House meeting with state governors.

But there’s no way to know this soon whether the new coronavirus will phase out with the shift in seasons like the flu or other, more mild coronaviruses.

"Since COVID-19 is an emerging pathogen that surfaced in December, it is hard to draw conclusions for the spring," Cohen told us. "Some respiratory viruses are seasonal, so this might be considered a reasonable hope."

In the meantime, public health officials and epidemiologists are "trying to learn the ‘rules’ that govern COVID-19" so they can "maximize prevention and treatment," Cohen said.

Centers for Disease Control and Prevention, "Transcript for the CDC Telebriefing Update on COVID-19," Feb. 26, 2020

Centers for Disease Control and Prevention, "Signs and Symptoms,", Nov. 5, 2019

USA Today, "Trump addressed the nation on coronavirus. We checked the facts." Feb. 26, 2020

The White House, "Remarks by President Trump at the White House Business Session with our Nation’s Governors," Feb. 10, 2020

The White House, "Proclamation on Suspension of Entry as Immigrants and Nonimmigrants of Persons who Pose a Risk of Transmitting 2019 Novel Coronavirus," Jan. 31, 2020

Email interview with Richard Watanabe, professor of preventive medicine at the University of Southern California’s Kerk School of Medicine, Feb. 26, 2020

Email interview with Myron Cohen, director of the Institute for Global Health and Infectious Diseases at the University of North Carolina at Chapel Hill’s School of Medicine, Feb. 27, 2020