A reader’s guide to misinformation about the coronavirus

Don’t expect a fast recovery from hoaxes and conspiracy theories about the coronavirus.

As of Jan. 30, the virus has spread to at least 18 other countries and infected more than 7,800 people. The World Health Organization declared it an international public health emergency.

As the situation develops, PolitiFact compiled what we do and don’t know about the 2019 coronavirus. If you have a question about the virus, or if you see a questionable post on social media, send it to [email protected].

It’s important to know that officials are still investigating the 2019 coronavirus, so you should be skeptical of sources that claim to have the full story.

Formally known as 2019-nCoV acute respiratory disease, the current coronavirus was first detected in the city of Wuhan, China, in December. It is one of seven kinds of coronaviruses that can infect humans.

Coronaviruses are named for the "crown-like spikes on their surface" and are found in animals like camels, cattle, cats and bats. Rarely do they spread from animals to people. Human coronaviruses were first identified in the mid 1960s, according to the CDC.

The vast majority of cases are in China, where the WHO says there are 12,167 more suspected cases and 170 deaths. The country has imposed strict travel restrictions in and around Wuhan to try and slow the spread of the virus.

There are also confirmed cases in several European and Asian countries, as well as Australia, Canada and the United States (where there were five reported cases as of Jan. 30). 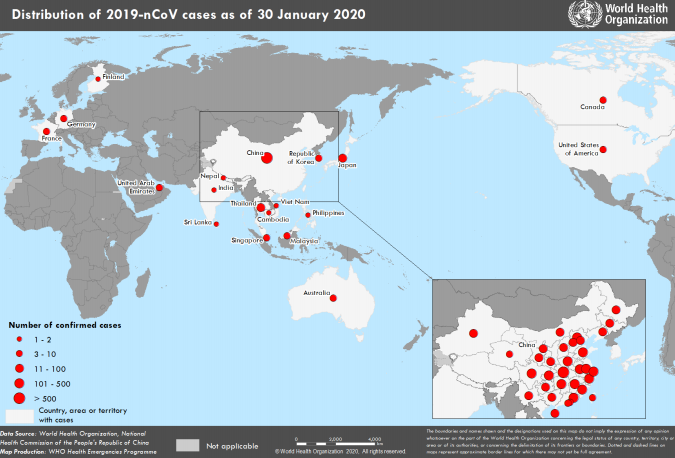 But the likelihood of people in the United States catching the virus is minimal, at least for now. "For the general American public, who are unlikely to be exposed to this virus, the immediate health risk from 2019-nCoV is considered low," the CDC says in its risk assessment.

The WHO lists several recommendations for reducing the risk of new coronavirus infections:

• Wash hands frequently, especially after direct contact with ill people or their environment.

Several early posts on Facebook and Twitter, as well as YouTube videos and articles, speculated about the source. They claimed there were already patents for potential vaccines or disinfectants to slow the virus’s spread — proof that the illness was created by companies or foundations looking for financial gain.

Those allegations are inaccurate.

Some organizations, including the CDC and the United Kingdom-based Pirbright Institute, do have patents for potential coronavirus vaccines, but not for the strain spreading from China. There is no vaccine available for the 2019 coronavirus.

Other Facebook posts, YouTube videos and articles have concocted more nefarious theories. Some go as far as to say that coronavirus was developed in a lab as a "bioweapon for population control" and that Chinese spies stole virus samples from Canada.

RELATED: Fact-checking hoaxes and conspiracies about the coronavirus

There is no evidence to support those claims.

While its investigation is still ongoing, the CDC has said the 2019 coronavirus appears to have originated at a seafood and animal market in Wuhan, China. Some conspiracies conflated the latest virus with MERS, while others fabricated claims about the Chinese government.

As the virus spread around the world, other social media posts started to speculate about its impact. Some conspiratorial websites claimed the 2019 coronavirus had killed 10,000 people in Wuhan, while others alleged that the U.S. Federal Emergency Management Agency had called on President Donald Trump to impose martial law.

Those claims are bunk.

FEMA never called on the president to declare martial law, and 170 people have died in China due to the coronavirus, according to the WHO.

Finally, some social media users have proposed a concerning way to prevent coronavirus infections: drinking bleach. Several tweets and now-deleted YouTube videos claim a bleaching agent, which has been touted by anti-vaxxers and conspiracy theorists as a "miracle cure," will instantly "kill the deadly virus."

Those claims are false.

There is no scientific evidence that drinking bleach will help cure or prevent any disease. The U.S. Food and Drug Administration has released multiple warnings about the "dangerous and potentially life threatening side effects" of bleaching agents and urge people not to drink them.

Misinformation thrives when verified information is scant. Such is the case with the 2019 coronavirus.

Among the facts that experts are still ironing out: the original source of the outbreak, precisely how it spreads and how severe it is.

The source of the outbreak is particularly contested. Early reports focused on the fact that many patients were linked to a large seafood and live animal market in Wuhan. That suggested animal-to-person spread, according to the CDC.

Later, a growing number of patients reported not having any connection to the market. That suggested the coronavirus was spreading person-to-person.

Both Chinese authorities and the CDC have isolated the genome of the 2019 coronavirus. Their findings suggest "a likely single, recent emergence of this virus from an animal reservoir."

Some have speculated that a lab near Wuhan could be the source of the virus. The Wuhan National Biosafety Laboratory is a maximum-security biolab that deals with some of the world’s most dangerous pathogens, including Ebola and SARS. As of now, however, there is no evidence that the lab is the source of the outbreak.

It’s also not clear how it spreads.

The CDC says the spread of MERS and SARS is thought to be caused by "respiratory droplets produced when an infected person coughs or sneezes." That’s similar to how other pathogens spread, including influenza.

However, experts aren’t sure if the 2019 coronavirus can be transferred through other means, such as fecal-oral contact. They also aren’t sure at what point the virus becomes contagious. The head of China's National Health Commission has said it could be possible to spread the illness before showing symptoms.

Then there’s the question of how many cases there actually are.

Officially, there are more than 7,800 people confirmed cases of the 2019 coronavirus worldwide. But experts estimate that the actual number of infected people is probably much higher. Complicating matters is the fact that China has a history of concealing disease outbreaks; in 2002, it downplayed an outbreak of SARS in the province of Guangdong.

"Newspapers were forbidden from reporting the disease, except for occasional statements from government officials assuring the public that there was nothing to worry," the Guardian wrote Jan. 23. "Such was the obsession with suppressing ‘negative news’ that when a sick traveller from Guangdong arrived in Beijing, doctors there had no idea of what the illness was, and allowed it to spread in the city."

One final unknown detail about the 2019 coronavirus is its severity. Many people recover within a few days, but some, such as young, elderly or immunocompromised people, may develop more serious infections, like bronchitis or pneumonia.

"The complete clinical picture with regard to 2019-nCoV is still not fully clear," the CDC says in its illness severity assessment. "Reported illnesses have ranged from infected people with mild illness to people being severely ill and dying."

Agence France-Presse, "Here's What Scientists Do And Don't Know About Wuhan Coronavirus So Far," Jan. 29, 2020

The Guardian, "China’s response to the coronavirus shows what it learned from the Sars cover-up," Jan. 23, 2020

New York magazine, "What Experts Do and Don’t Know About the Coronavirus Outbreak," Jan. 28, 2020

PolitiFact, "Clorox bottles don’t prove the coronavirus was 'developed' before the outbreak," Jan. 30, 2020

World Health Organization, "Statement on the second meeting of the International Health Regulations (2005) Emergency Committee regarding the outbreak of novel coronavirus (2019-nCoV)," Jan. 30, 2020

Zero Hedge, "Did China Steal Coronavirus From Canada And Weaponize It?" Jan. 26, 2020