Who are the doctors in the viral hydroxychloroquine video?

Despite social media platforms’ efforts to remove it, millions of people have seen a viral video of doctors making false and misleading claims about the coronavirus pandemic.

The video went viral after it was widely shared in Facebook groups for anti-vaxxers and people against face masks. Other groups dedicated to conspiracy theories like QAnon further amplified the video. Eventually, public figures like President Donald Trump and Madonna shared it with millions of social media followers.

RELATED: Fact-checking a video of doctors talking about coronavirus, hydroxychloroquine

"There was a group of doctors yesterday, a large group that were put on the internet. For some reason, the internet wanted to take them down and took them off," Trump said during a July 28 press conference. "I don’t know why. I think they’re very respected doctors."

Social media platforms removed the video because it contains several claims that run counter to official recommendations from public health officials. But who are the doctors who made them? PolitiFact investigated.

The physicians in the video are associated with a group called America’s Frontline Doctors, which advocates against official narratives of the coronavirus pandemic. The group, whose now-defunct website was registered on July 16, was in Washington for a "White Coat Summit," after which some of the doctors met with Vice President Mike Pence.

All of the physicians we fact-checked have a history of making unproven, conspiratorial or bizarre medical claims. 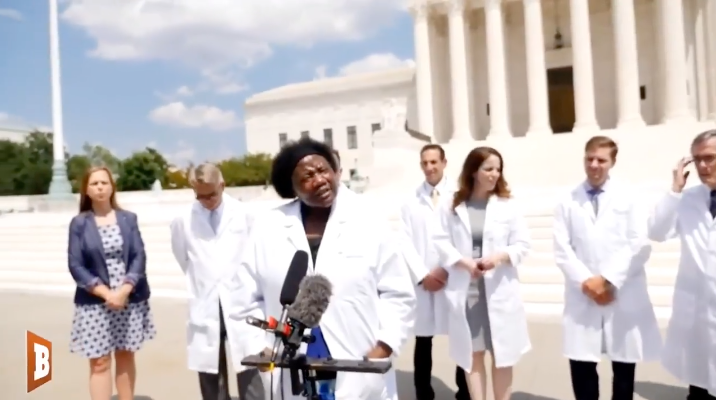 Dr. Stella Immanuel is a Houston-based primary care physician and minister. In the video, she claimed that the coronavirus "has a cure."

"It is called hydroxychloroquine, zinc, and Zithromax," Immanuel said. "I know you people want to talk about a mask. Hello? You don’t need a mask. There is a cure."

We rated that False — and Immanuel has a track record of making unproven medical claims, such as believing in alien DNA.

Immanuel has a Texas medical license with specialties in pediatrics and emergency medicine. She says she has been practicing medicine in the United States or Canada for 24 years. She received her medical degree in Nigeria.

Immanuel operates a clinic in a strip mall next to her church, Firepower Ministries. In sermons published on YouTube and articles on the church’s now-defunct website, first unearthed by the Daily Beast, Immanuel makes several outlandish medical claims.

Among them: Medical problems like cysts are caused by sex with "spirit husbands" and "spirit wives," DNA from aliens is being used in medicine and scientists are developing vaccines to prevent people from being religious.

More recently, Immanuel has doubled down on hydroxychloroquine, which is not a proven treatment (or cure) for COVID-19.

"If you have taken hydroxychloroquine and you have been cured, it’s time to speak up," she said in a July 28 Facebook video.

We reached out to Immanuel for a comment, but we haven’t heard back. 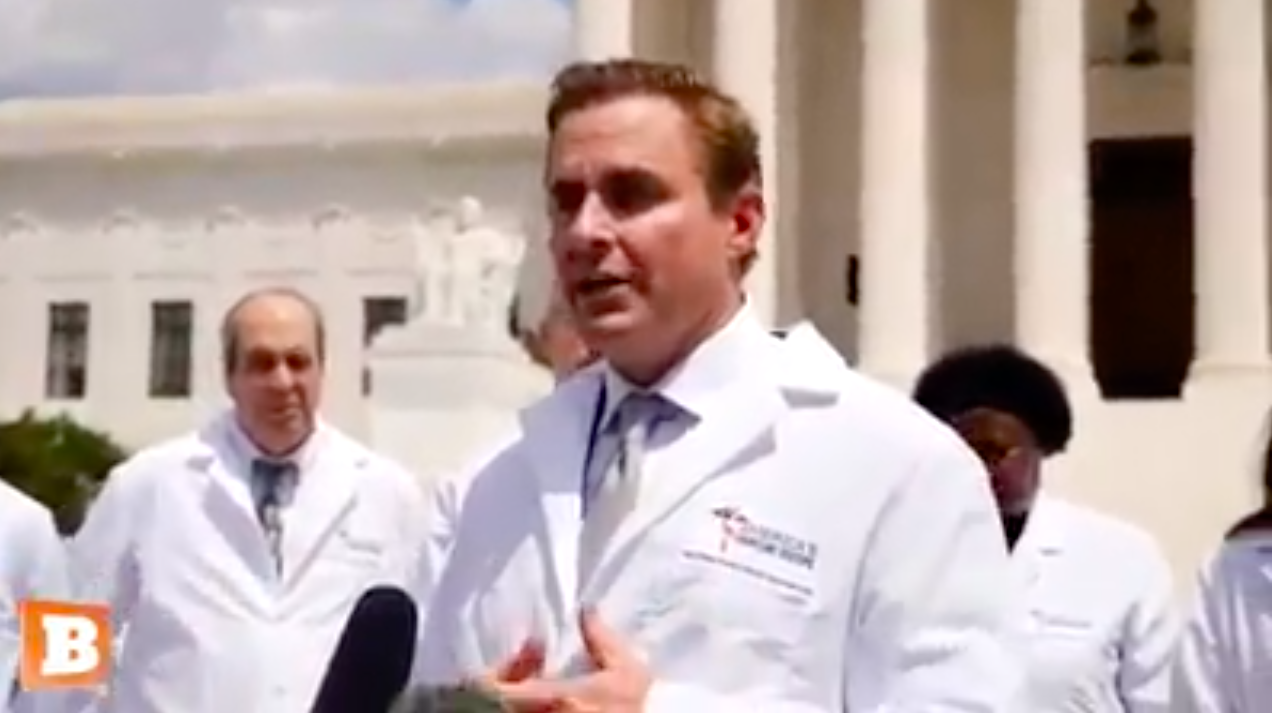 Dr. Dan Erickson is a California-based osteopath who co-owns an urgent care clinic. In the video, he claimed that state lockdowns have little effect on the coronavirus fatality rate.

"So this measured approach I’m talking about isn’t made up. It’s going on in Sweden, and their deaths are about 564 per million. UK, full lockdown, 600 deaths per million," he said. "So we’re seeing that the lockdowns aren’t decreasing significantly the number of deaths per million."

We found that those numbers are in the ballpark, but they’re cherry-picked. And Erickson has a history of making misleading and unproven claims about the coronavirus.

Erickson co-owns an urgent care clinic in the Bakersfield, Calif., area. He is a former emergency room physician and has a medical license through the Osteopathic Medical Board of California.

In May, Erickson appeared with Dr. Artin Massihi, co-owner of Accelerated Urgent Care, in another viral video called "Plandemic," which is filled with conspiracy theories about the coronavirus pandemic. In it, they claimed that stay-at-home orders and face masks are not necessary because they weaken your immune system. The doctors made similar assertions in an April press conference and on Fox News.

We reached you to Accelerated Urgent Care for a comment, but we haven’t heard back. 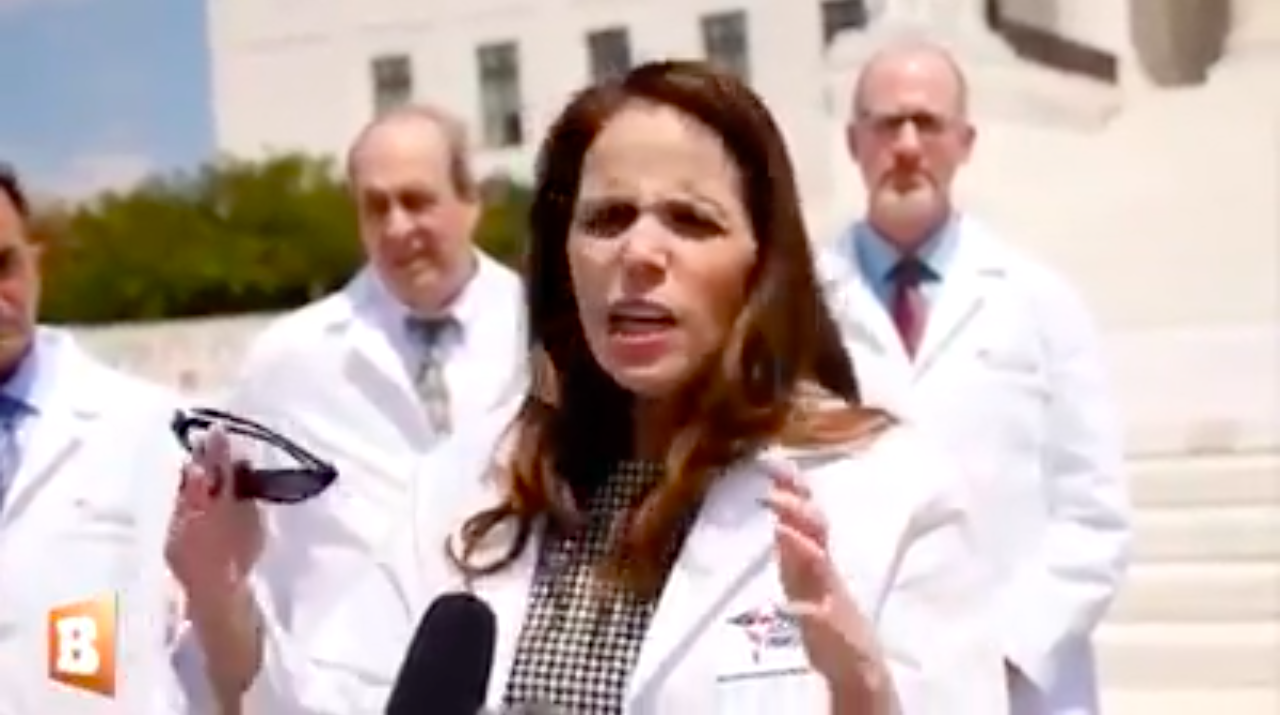 Dr. Simone Gold is the founder of America’s Frontline Doctors and a Los Angeles-based physician. In the video, she made misleading claims about hydroxychloroquine prescriptions and coronavirus case numbers.

"We’re here because we feel as though the American people have not heard from all of the expertise that’s out there all across our country," Gold said at the start of the press conference.

According to the Medical Board of California, Gold holds an active medical license. She specializes in emergency medicine and general practice. She graduated from Rosalind Franklin University’s Chicago Medical School in 1989.

For the past few months, Gold has been involved in a drive aimed at mobilizing doctors that believe states should reopen faster. The Save Our Country Coalition, which seeks to raise millions of dollars, is backed by advocates linked to several conservative organizations, including the FreedomWorks Foundation and the Tea Party Patriots, according to the Guardian.

As part of that effort, hundreds of physicians sent an open letter to Trump in late May that called state shutdowns "a mass casualty incident" — despite evidence that suggests stay-at-home orders prevented new coronavirus cases and deaths. Gold was the first signature on the letter.

Gold has also appeared on conservative talk radio and podcast programs, during which she has advocated for the use of hydroxychloroquine in treating COVID-19 patients. She has donated to several Republican causes in the past, including Sen. Susan Collins, R-Maine.

Gold told the Associated Press that she started to speak out about the pandemic because there is "no scientific basis that the average American should be concerned" about COVID-19. (Public health experts say otherwise.)

We reached out to Gold for a comment, but we haven’t heard back.

BBC, "Hydroxychloroquine: Why a video promoted by Trump was pulled on social media," July 28, 2020

BuzzFeed News, "These Are The Fake Experts Pushing Pseudoscience And Conspiracy Theories About The Coronavirus Pandemic," May 21, 2020

Centers for Disease Control and Prevention, "How to Protect Yourself & Others," April 24, 2020

CNN, "Some doctors met with Pence after their group's video was removed for misleading info," July 29, 2020

PolitiFact, "Fact-checking ‘Plandemic’: A documentary full of false conspiracy theories about the coronavirus," May 8, 2020

The Washington Post, "Trump retweeted a video with false covid-19 claims. One doctor in it has said demons cause illnesses." July 29, 2020