House Speaker Nancy Pelosi, D-Calif., and Rep. Jamie Raskin, D-Md., unveiled a bill Oct. 9 to establish a commission that could be tasked with determining if a president is no longer fit for office.

The bill from Raskin, a former constitutional scholar, comes on the heels of President Donald Trump’s Oct. 2 announcement of his positive COVID-19 test. The bill would create what would be known as the ‘‘Commission on Presidential Capacity to Discharge the Powers and Duties of the Office" in accordance with the 25th Amendment to the Constitution.

The commission would not have the unilateral power to invoke the 25th Amendment and kick Trump or any future president out of the White House. Pelosi and Raskin insisted in a press conference that the move was unrelated to the election less than a month away.

"This is not about President Trump," said Pelosi. "He will face the judgment of the voters. But he shows the need for us to create a process for future presidents."

Trump responded to the news by tweeting that Pelosi is angling to one day replace Democratic presidential nominee Joe Biden with his running mate, Sen. Kamala Harris. There is no factual basis to support that claim, and Pelosi would not sit on the commission the bill would create.

Crazy Nancy Pelosi is looking at the 25th Amendment in order to replace Joe Biden with Kamala Harris. The Dems want that to happen fast because Sleepy Joe is out of it!!!

The Constitution allows for such a commission

The 25th Amendment, established in 1967 after the assassination of President John F. Kennedy, spelled out general procedures to guide the replacement of a president or vice president in the event of death, incapacitation, resignation or removal from office.

RELATED: What happens if a president or nominee dies or is incapacitated? Around elections, it gets thorny

The first three sections of the amendment lay out the succession plan for when these top two positions go vacant. They also allow the president to declare himself unable to carry out his duties and temporarily transfer the powers of the presidency to the vice president.

The fourth and final section is what’s relevant to Raskin’s bill. The section authorizes the vice president and a majority of the Cabinet, or "of such other body as Congress may by law provide," to declare a president "unable to discharge the powers and duties of his office."

"Legislation like this is provided for in §4," tweeted Brian Kalt, a law professor at Michigan State University and the author of a book on the provision. "It says that the VP and Cabinet invoke §4, but that Congress can legislate a different body to substitute for the Cabinet in that process."

"It gave Congress the power to replace the Cabinet with ‘such other body’ as it might create by law," added Joel K. Goldstein, a professor of law emeritus at St. Louis University and the author of two books on the vice presidency, in an email. "If such a body was created, a majority of it would act with the vice president under section 4 of the amendment instead of the Cabinet." 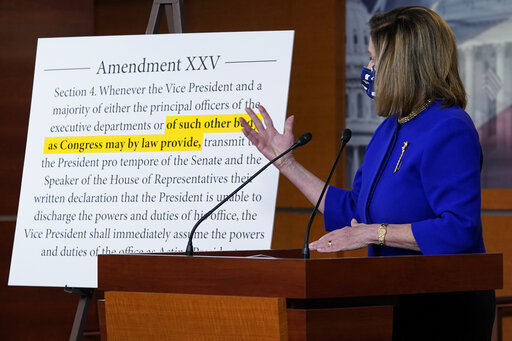 House Speaker Nancy Pelosi, D-Calif., gestures to a board displaying the fourth section of the 25th Amendment during a press conference at the Capitol in Washington on Oct. 9, 2020. (AP)

The bipartisan commission outlined in Raskin’s bill would consist of 17 members, a mix of medical experts and former high-ranking officials selected by House and Senate leadership.

The final member, the chair, would be appointed separately by those 16 members.

What happens under the status quo

The 25th Amendment says that a declaration that the president can no longer carry out his duties — made by the vice president and a majority of either the Cabinet or another body determined by lawmakers — would elevate the vice president to the position of acting president.

The president could then restore his powers by declaring that no inability exists, but the same entity that initially transferred power to the vice president would be able to respond by doubling down on their declaration that the president is unable to discharge his duties.

At that point, the vice president would continue to act as president if Congress, by a two-thirds vote in both the House and Senate, agreed that the president remained unable to serve.

The process under current law would leave the Cabinet in the mix. "The situation without (Raskin’s bill) is the situation we have now," Kalt told PolitiFact in an email.

"The Cabinet has a role in section 4 that this body would take over if the bill passed. Raskin and others feel that the Cabinet is too much under the president’s thumb to take a robust role under section 4," Kalt said. "A more independent group like this would not feel so constrained."

Leaving the decision to the Cabinet does run the risk that loyalty to the president could override necessary action, Goldstein said. But a commission brimming with doctors carries its own risks, even if mental illness or physical incapacitation were front of mind for the amendment’s writers.

RELATED: When can the 25th Amendment be used against a president?

If, for example, the president were kidnapped, on a plane that went missing, or out of reliable communication, "medical expertise would not be called for," Goldstein said.

Many in Congress at the time of the amendment’s writing had misgivings about the idea of a medical commission, Goldstein said. They thought a decision involving the Cabinet would carry more legitimacy, and they worried an independent body could be used to harass the president.

They also left the language intentionally vague to account for scenarios they couldn’t predict.

"The framers knew that they were not addressing all problems," Goldstein said. "But they realized that if they tried to address everything, they would probably get nothing through."

Rep. Jamie Raskin, "‘Commission on Presidential Capacity to Discharge the Powers and Duties of 6 the Office Act," Oct. 9, 2020

PolitiFact, "What happens if a president or nominee dies or is incapacitated? Around elections, it gets thorny," Oct. 2, 2020

Email interview with Brian Kalt, professor of law at Michigan State University and author of "Unable: The Law, Politics, and Limits of Section 4 of the Twenty-Fifth Amendment," Oct. 9, 2020