Tony Bobulinski speaks with reporters before the presidential debate on Oct. 22, 2020, in Nashville. (AP/Vucci)

A former associate of Hunter Biden has televised his grievances about former Vice President Joe Biden, telling Fox News host Tucker Carlson that the elder Biden was more involved in his son’s overseas business dealings than he has let on.

Tony Bobulinski claimed that emails, text messages and audio recordings he released show the Democratic presidential nominee was entangled in a 2017 venture involving a Chinese firm.

No credible news outlets have reported any wrongdoing or role held by Joe Biden, and Biden’s campaign has denied that their candidate got involved in, or stood to gain from, the venture or any other overseas business arrangements.

"I have not taken a penny from any foreign source ever in my life," Joe Biden said during the final presidential debate, pointing to reporting about a bank account President Donald Trump has in China.

But Bobulinski’s allegations have dominated Fox News and other conservative websites. Forbes reported that Carlson’s Oct. 27 interview was the highest rated non-debate telecast of the year. Carlson ran a follow-up segment the next night, claiming Fox News had procured additional documents related to Hunter Biden but that they went missing in the mail.

So far, much of what Bobulinski has said remains unverified. What Trump allies were trying to sell as a smoking gun in the run-up to the election has produced little smoke thus far. It’s the latest chapter in the push for dirt on Hunter Biden that led to Trump’s impeachment in 2019.

Who is Tony Bobulinski, why is he all over News Feed?

Bobulinski, a former Navy lieutenant, has claimed that Joe Biden knew about one of his son’s proposed business ventures with a Chinese oil company. Bobulinski claimed he met with the Biden family multiple times.

On Oct. 22, the night of the final presidential debate, Bobulinski said in a statement to reporters that he wanted to "set the record straight" on the Biden family’s "dealings with the Chinese."

Bobulinski said that, in 2017, Hunter Biden consulted with his father about forming a new venture with CEFC China Energy Co. to invest in real estate and technology in the U.S. Bobulinski was brought into the venture by James Gilliar, an English businessman who purportedly knew the Bidens through Rob Walker, a former Clinton administration official.

Bobulinski became a partner and CEO of the venture, which was named SinoHawk Holdings LLC. The company was incorporated in Delaware in May 2017.

The Wall Street Journal reported that the deal fell through; SinoHawk never received money from or completed deals with the Chinese oil company. According to the newspaper, Hunter, Joe Biden’s brother James, Gilliar and Walker were also involved — but there was no role for Joe Biden.

"Everything I’m saying is corroborated by emails, WhatsApp chats, agreements, documents and other evidence," he told reporters gathered Oct. 22, before gesturing to three phones that he claimed contained incriminating evidence and said he would hand over to authorities.

Bobulinski provided some of his records to outlets like Fox News and the Wall Street Journal. Both reported that they do not show Joe Biden had business dealings with SinoHawk Holdings or took money from the Chinese company.

That wasn’t the angle Trump allies described as they pitched the story to the Wall Street Journal in early October. The New York Times reported that a White House lawyer, a former deputy White House counsel and a public relations man close to Donald Trump Jr. took Bobulinski’s claims to the Wall Street Journal with the hope that the newspaper would cover them before Election Day.

The Journal stalled on the story while its reporters tried to determine whether Bobulinski’s documents implicated Joe Biden. In the meantime, Trump personal lawyer Rudy Giuliani took a version of the allegations to the New York Post.

The tabloid published an article Oct. 14 that made allegations based on emails on a computer hard drive allegedly belonging to Hunter Biden that was left at a repair shop. No news organizations have been able to verify the authenticity of those emails.

Former Trump aide Steve Bannon told the Times that Bobulinski got spooked by the length of time the Journal was taking on the story and sent an on-the-record statement to a range of news organizations. Breitbart, a conservative site, published the statement.

There’s reason to be skeptical about Bobulinski’s allegations, which credible news organizations have not corroborated. The Associated Press, for example, reported that it could not independently verify Bobulinki’s claims. PolitiFact has not been able to, either.

The Wall Street Journal reviewed his documents and found no evidence of wrongdoing by Joe Biden — or that he was active in his family’s foreign business endeavors, as Bobulinski claimed.

Bobulinski’s overarching claim is that Joe Biden was involved in, and may have profited from, his son and brother’s business dealings in China. He called Joe Biden’s claim that he never played a role in Hunter Biden’s foreign business endeavors "a blatant lie."

But the Journal reported that the text messages and emails Bobulinski shared from 2017 "don’t show either Hunter Biden or James Biden discussing a role for Joe Biden in the venture."

The venture in China "never received proposed funds from the Chinese company or completed any deals, according to people familiar with the matter," the outlet reported. "Corporate records reviewed by The Wall Street Journal show no role for Joe Biden."

The Journal also quoted Gilliar, the British national involved in SinoHawk, as saying he was "unaware of any involvement at any time of the former vice president." Gilliar added that "the activity in question never delivered any project revenue." 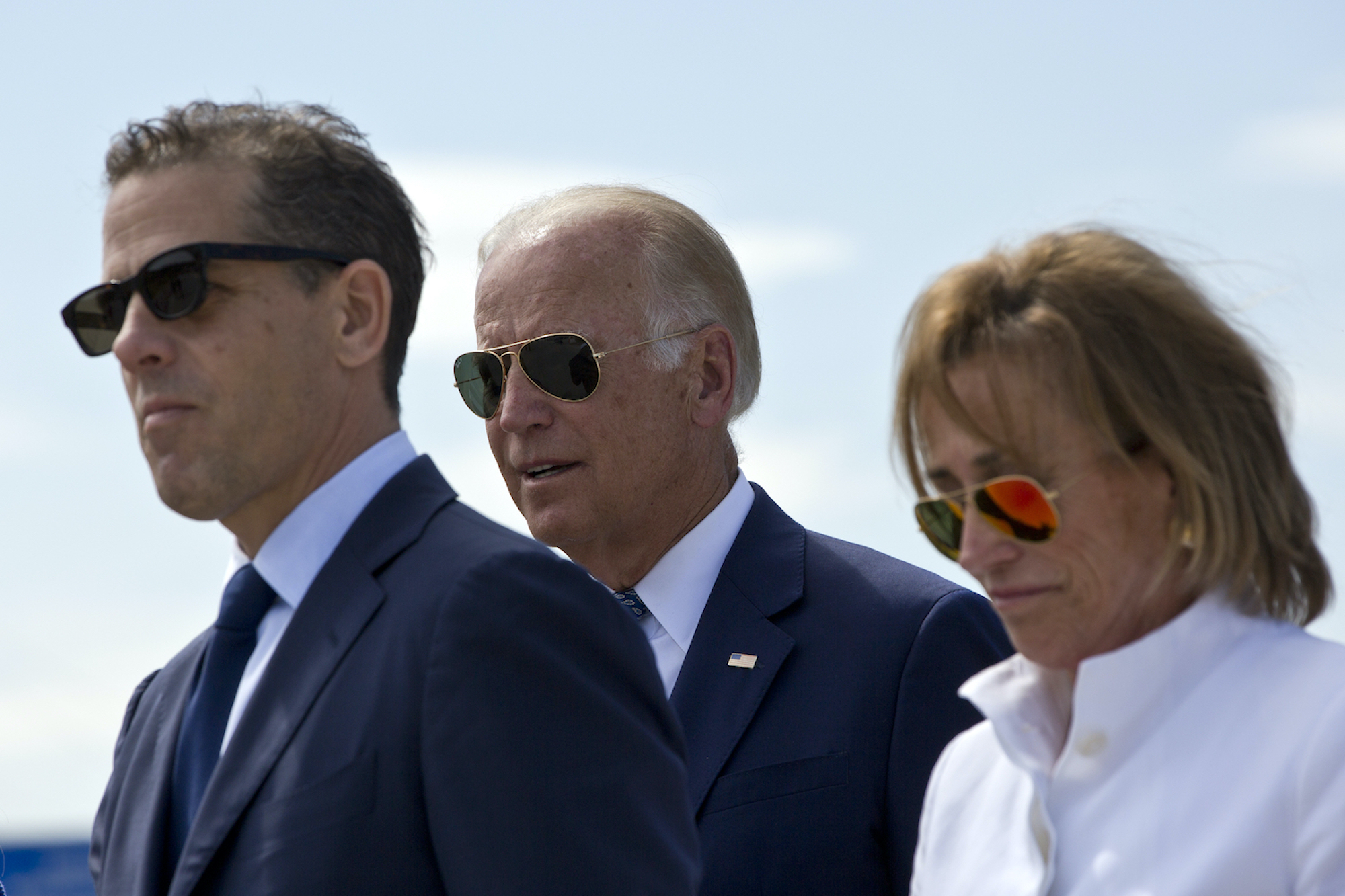 Financial disclosures and tax records for Joe Biden show no indication of any income related to the venture at hand, as the Times and Vox reported.

Bobulinski claimed he met with the elder Biden twice, including once in May 2017 at Hunter and James Biden’s request. Bobulinski told Carlson that it was "crystal clear" that Hunter Biden had told his father about the venture, but he also said the group "didn’t go into too much detail on business" during the meeting.

After a speech Joe Biden gave the next day, Bobulinski said the former vice president asked for his thoughts on the speech and then told him to "keep an eye on his son and his brother."

Joe Biden was not in office at the time, nor had he launched his campaign for president.

Bobulinski’s evidence also includes an email, originally published by the New York Post, that he received from Gilliar. The email appeared to describe a proposal for the division of equity related to the venture, before it fell through. The split would have included "20 H," "10 Jim," and "10 held by H for the big guy?"

Bobulinski said the "big guy" referenced in a question was Joe Biden. Bobulinski has also claimed that Joe Biden was the person described in another message days later as "the Chairman."

PolitiFact asked the Biden campaign for comment, but we haven’t heard back.

Bobulinski also provided Carlson with audio that showed Walker — the former Clinton administration official who Bobulinski and Carlson described as a representative of the Biden family — saying that if Bobulinski spoke out publicly, "You’re just going to bury all of us, man."

It’s not clear if the comments were shown in proper context on Carlson’s show, but Biden campaign spokesperson Andrew Bates told the Associated Press "it is totally inaccurate to describe (Walker) as a representative of the Biden campaign or any member of the Biden family."

RELATED: A look at the NY Post headline about Joe Biden and a Ukraine meeting

What do we know about the Bidens and China?

Hunter Biden has been involved in multiple business dealings with Chinese companies, but there is no evidence that his father played a role.

In his statements to the press, Bobulinski cited a September report from Sen. Ron Johnson, R-Wis., and Sen. Chuck Grassley, R-Iowa, that investigated Hunter Biden’s foreign business dealings. That report showed that the younger Biden dealt with Chinese companies through a company called Bohai Harvest RST, or BHR.

Hunter Biden got involved with the investment fund after it was set up in 2013 by Rosemont Seneca Partners, a company he helped form in 2009, and the Bank of China. PolitiFact reported how, in 2015 and 2017, BHR inked multi-million dollar deals with various Chinese companies.

In 2019, the Wall Street Journal reported that 80% of BHR was controlled by Chinese entities, according to business registrations. Hunter Biden was an unpaid board member until October 2017, when he took a 10% financial stake in the company. Two years later, his lawyer announced that he’d resigned without any return on his investment.

Bobulinski said he was also inspired to speak out after the Senate’s report mentioned roughly $5 million in indirect payments CEFC Infrastructure Investment made to Hunter Biden’s law firm.

Hunter Biden’s foreign engagements have created a problem of appearances for his father. But they are not the smoking gun that some have made them out to be, and they have not been found to have had any influence on U.S. policies with respect to foreign nations, according to the Johnson report. There is no evidence that Joe Biden was orchestrating or benefiting from these deals.

The Daily Beast, "Tucker Suggests His Hunter Biden Dirt Was Intercepted in the Mail," Oct. 28, 2020

The New York Post, "Emails reveal how Hunter Biden tried to cash in big on behalf of family with Chinese firm," Oct. 15, 2020

PolitiFact, "Hunter Biden and China: Sorting through a murky business deal," May 22, 2020

The Wall Street Journal, "What We Know About Hunter Biden’s Dealings in China," Oct. 4, 2019