COVID-19 vaccines during pregnancy: Why scientists and doctors say it's safe

A nurse gives a shot of the Pfizer vaccine for COVID-19 to a pregnant woman in Montevideo, Uruguay, on June 9, 2021. (AP/Campodonico)

As the spread of new coronavirus variants adds more urgency to the push to vaccinate people against COVID-19, public health officials and doctors across the country are working to reassure one group of Americans: those concerned about vaccines and pregnancy.

The Centers for Disease Control and Prevention revamped its COVID-19 vaccination recommendation for pregnant women, citing a new analysis demonstrating the safety of the shots during pregnancy. The analysis looked at nearly 2,500 women who got the Moderna or Pfizer vaccine before 20 weeks of pregnancy and found no increased risk of miscarriage.

The CDC’s firmer recommendation is significant because pregnant women have a heightened risk of developing severe illness from a COVID-19 infection. But as of Aug. 7, only 23% of pregnant people in the U.S. had received at least one vaccine dose.

Previously, the CDC had advised that pregnant women could get vaccinated, and that there was no evidence the shots would cause problems. The new guidance affirmatively encouraging the vaccines reflects the advice of medical groups including the American College of Obstetricians and Gynecologists, which strongly support the vaccines before, during and after pregnancy.

Here we address some questions PolitiFact is seeing online and hearing from readers about COVID-19, pregnancy and the vaccines.

How serious are the risks of COVID-19 for pregnant women?

Serious. Pregnancy is on the CDC’s list of conditions that elevate a person’s risk of serious illness from COVID-19. 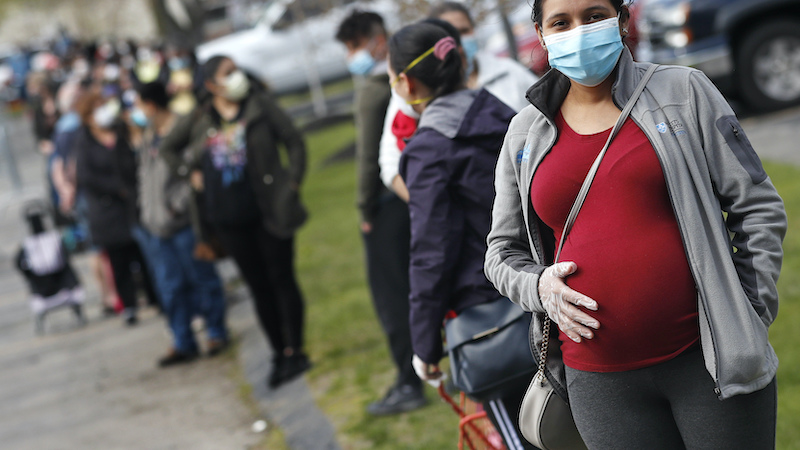 A pregnant woman waits in line for groceries at a food pantry sponsored by St. Mary's Church in Waltham, Mass., on May 7, 2020. (AP)

COVID-19 makes pregnant women more likely to experience a preterm birth and other complications with their pregnancies, the CDC says, and one study found that women who gave birth with COVID-19 were more likely to require ventilation, need intensive care or die.

Dr. Linda Eckert, a gynecologist and a professor at the University of Washington, said that as the evidence in favor of vaccinating pregnant women grows and as the contagious delta variant drives new infections, she’s started more directly urging patients to get their shots.

"I am seeing very scary COVID in pregnant women," said Eckert, who helped pen the American College of Obstetricians and Gynecologists’ statement on the vaccines and pregnancy, and who also serves as the group’s liaison to the CDC’s Advisory Committee on Immunization Practice.

Eckert said her hospital is treating several pregnant COVID-19 patients and having to carry out emergency preterm deliveries for mothers with compromised breathing.

In her own practice, Dr. Mary Jane Minkin has also seen pregnant women severely ill with COVID-19 hospitalized and placed in intensive care units. Minkin, a clinical professor of obstetrics, gynecology and reproductive sciences at Yale University School of Medicine, said one young woman who was pregnant struggled on the ventilator to the point that she needed an extracorporeal membrane oxygenator to pump oxygen-filled blood back into her body.

"And no, the baby didn’t make it," Minkin said. She never learned whether the woman survived.

Are the COVID-19 vaccines effective for people who are pregnant?

Yes. Growing evidence suggests that the shots can help protect against severe illness brought on by a coronavirus infection, and also against getting infected in the first place.

A July study highlighted by the CDC found that the vaccines lowered the risk of infection in pregnant women. The study compared pregnant women in Israel who received an mRNA vaccine with similar pregnant women who did not.

There’s also evidence that pregnant women may pass along some of that protection to their babies, although the CDC says further study is needed. Antibodies generated after the mRNA COVID-19 vaccines have been found in umbilical cord blood, and also in breastmilk.

"The antibodies do cross, and that is great news. That causes the infants to be born with antibodies present from the mother," Eckert said, citing multiple studies.

Are the COVID-19 vaccines safe for people who are pregnant?

Yes. Public health officials, scientists and doctors widely agree that the vaccines are safe for pregnant women, and growing evidence from safety data shows an absence of harm. 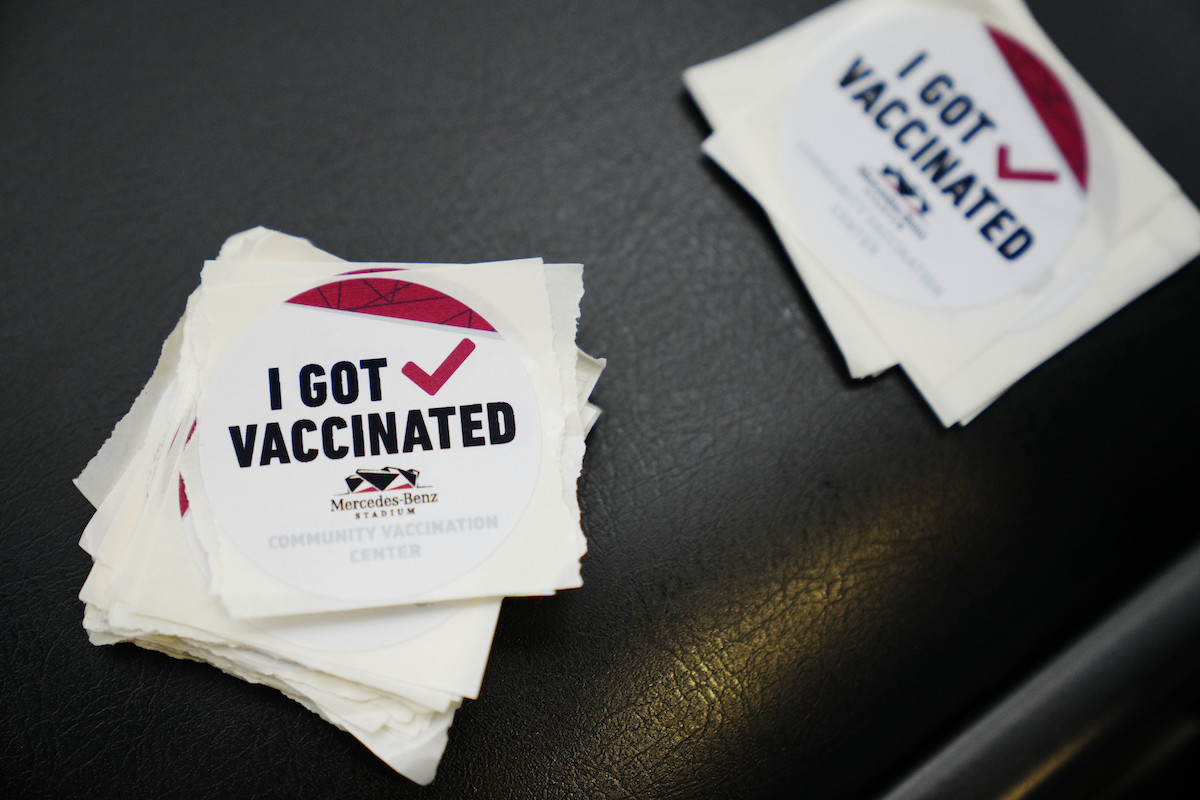 Stickers that say "I got vaccinated" at Atlanta's Mercedes-Benz Stadium, a former vaccination site, on March 25, 2021. (AP)

Much of the vaccine resistance from pregnant women is among those who are afraid that the vaccines aren’t safe, Eckert said. And while those fears are real, they aren’t supported by the facts — or by the science behind the vaccines.

"We understand the mechanism of how the vaccines work," Eckert said. "They don’t have any products that stay in your body. They don’t cross to fetal tissue or the placenta. They don’t integrate into the DNA, so they do not cause any genetic changes. They just prime the person to make antibodies against COVID."

The CDC’s recent analysis is the latest signal that the vaccines are safe during pregnancy.

In the analysis, the CDC assessed data from its V-safe registry, which collected information through smartphones from pregnant vaccine recipients on a voluntary basis. The rate of miscarriage among the nearly 2,500 women it studied — who got the Pfizer or Moderna shots before their first 20 weeks of pregnancy — was consistent with the rate of miscarriage in the general population.

The analysis supplemented a growing body of evidence demonstrating that the vaccines are safe during pregnancy. An earlier review of data from the V-safe registry and two other safety monitoring systems found no safety concerns for pregnant women who got immunized. Neither did the trials that tested the Pfizer, Moderna and Johnson & Johnson vaccines in animals.

"Please get the vaccines," Minkin added. "If you are thinking of getting pregnant, are pregnant, are breastfeeding, (there are) no reasons not to, and lots of reasons to do so."

Do the COVID-19 vaccines affect fertility or the ability to get pregnant?

No. The vaccines are recommended for people seeking to become pregnant soon or in the future, as there is no evidence that they cause problems with fertility.

The evidence shows that the vaccines are safe for people who want to get pregnant, the CDC says, despite some false claims.

"There’s no scientific basis for the concern of fertility implications," Eckert said.

The phase 3 clinical trials were an early signal that the COVID-19 vaccines do not prevent pregnancies, since several participants got pregnant, experts previously told PolitiFact. Since then, many people have become pregnant after receiving a vaccine outside of the trials.

"Currently no evidence shows that any vaccines, including COVID-19 vaccines, cause fertility problems … in women or men," the agency says.

Some false claims about miscarriages and fertility are premised on the idea that a spike protein generated after vaccination resembles a protein on placental cells, for example. But the two proteins aren’t similar enough to trick the immune system into attacking the placental cells.

"The similarities in the two were miniscule," Minkin said.

As far as men go, one recent study of 45 healthy men examined whether the Pfizer and Moderna vaccines had any impact on the quantity, movement, or other characteristics of their sperm. The researchers found "no significant changes" in these characteristics after vaccination.

Does being around vaccinated people affect menstrual cycles and fertility?

No. The COVID-19 vaccines do not "shed" to affect unvaccinated people.

Some anti-vaccine skeptics have taken claims about fertility a step further, falsely claiming that people need to worry not only about the vaccines, but about others who have gotten them.

A small private school in Miami sent a letter to faculty and staff instructing them to stay away from vaccinated students, on the false premise that the vaccines could "shed" to affect unvaccinated people. Minkin said one of her postmenopausal patients was convinced that such a shedding effect was behind a recent bleeding episode.

Despite these claims, the vaccines do not "shed" to cause death, disease, or problems with menstruation and fertility in unvaccinated people nearby.

Such shedding can only occur with vaccines that use weakened forms of the virus, according to the CDC. And none of the COVID-19 shots allowed for emergency use in the U.S. are live-virus vaccines.

We follow the facts and share what we learn so you can make your own decisions. Support our mission today.

U.S. Centers for Disease Control and Prevention, "COVID-19 Vaccines for People Who Would Like to Have a Baby," Aug. 11, 2021

CNN, "CDC strengthens recommendation for pregnant women to get vaccinated against Covid-19," Aug. 11, 2021

The Journal of the American Medical Association, "Characteristics and Outcomes of Women With COVID-19 Giving Birth at US Academic Centers During the COVID-19 Pandemic," Aug. 11, 2021

The Journal of the American Medical Association, "Association Between BNT162b2 Vaccination and Incidence of SARS-CoV-2 Infection in Pregnant Women," July 12, 2021

The Journal of the American Medical Association, "Sperm Parameters Before and After COVID-19 mRNA Vaccination," June 17, 2021

American Society for Reproductive Medicine, "SARS-CoV-2 spike protein seropositivity from vaccination or infection does not cause sterility," June 2, 2021

U.S. Centers for Disease Control and Prevention, "People with Certain Medical Conditions," May 13, 2021

PolitiFact, "University of Miami researchers looked at effects of COVID-19, not vaccines," May 19, 2021

PolitiFact, "Debunking the anti-vaccine hoax about ‘vaccine shedding,'" May 6, 2021

Phone interview with Dr. Linda Eckert, a gynecologist and a professor of obstetrics and gynecology at the University of Washington School of Medicine, Aug. 13, 2021