What was the Contingency and Crisis Response bureau? Examining the Trump-era proposal

Hundreds of people gather near a U.S. Air Force C-17 transport plane at the perimeter of the international airport in Kabul, Afghanistan on Aug. 16, 2021. (AP/Rahmani)

Shortly after the Taliban seized control in Afghanistan, Fox News hosts and other media claimed that President Joe Biden hamstrung U.S. ability to evacuate Americans from crises overseas by dismantling a Trump-era program.

The Biden administration said the Contingency and Crisis Response bureau, as the relatively obscure program was called, never existed in a functioning capacity — only that there were plans for it drawn up in the final months of the Trump presidency, and that the Biden team scrapped those plans because the agency already had the same capabilities.

Little is known outside the government about the proposed bureau. But the narrative that emerged on Fox News and other media outlets left a misleading impression: that Biden’s State Department had axed a unique, fully operational program meant to oversee all evacuations just weeks before the Taliban’s takeover.

"As the Taliban's gaining ground, Biden's team of incompetence killed the Trump-era program to oversee the evacuation of Americans from crisis zones around the world," Fox News host Laura Ingraham said Aug. 18.

Fox News analyst K.T. McFarland said, "They got rid of the one group that was poised to help with this great tragedy." And in a statement to the National Pulse, Trump accused the Biden administration of canceling his "successful" program.

But how settled the new bureau was — and how helpful it may have been to the evacuation effort in Afghanistan — is not as clear-cut as Ingraham, Trump and others made it seem.

The Contingency and Crisis Response bureau: Over before it really started

The narrative surrounding the Contingency and Crisis Response bureau appeared to originate with an Aug. 18 report from the Washington Free Beacon.

The website reported that an internal State Department memo from June, a copy of which PolitiFact obtained, approved the "termination" and "discontinuation of the establishment" of the proposed bureau. Other outlets quickly followed suit with similar reports.

But the on-air commentary broadcast to Fox News viewers left out the nuance that early online reports included — namely, that the State Department had said the proposed bureau was redundant and never fully operational.

"Not only would the proposed bureau not have introduced any new capabilities to the department, it was never formally established," a State Department spokesperson said in a statement to PolitiFact and other outlets. "Some administrative steps were taken before its establishment was paused, but the day-to-day operations of the team have not changed."

The U.S. military has been evacuating Americans and Afghans from Afghanistan on its flights, and the Pentagon recently ordered U.S. airlines to supply commercial planes to help. The U.S. has evacuated 70,700 people from Afghanistan since Aug. 14, Biden said. Secretary of State Antony Blinken said Aug. 25 that about 4,500 Americans have been evacuated since the airlift began, and that an estimated 1,500 remain in Afghanistan. 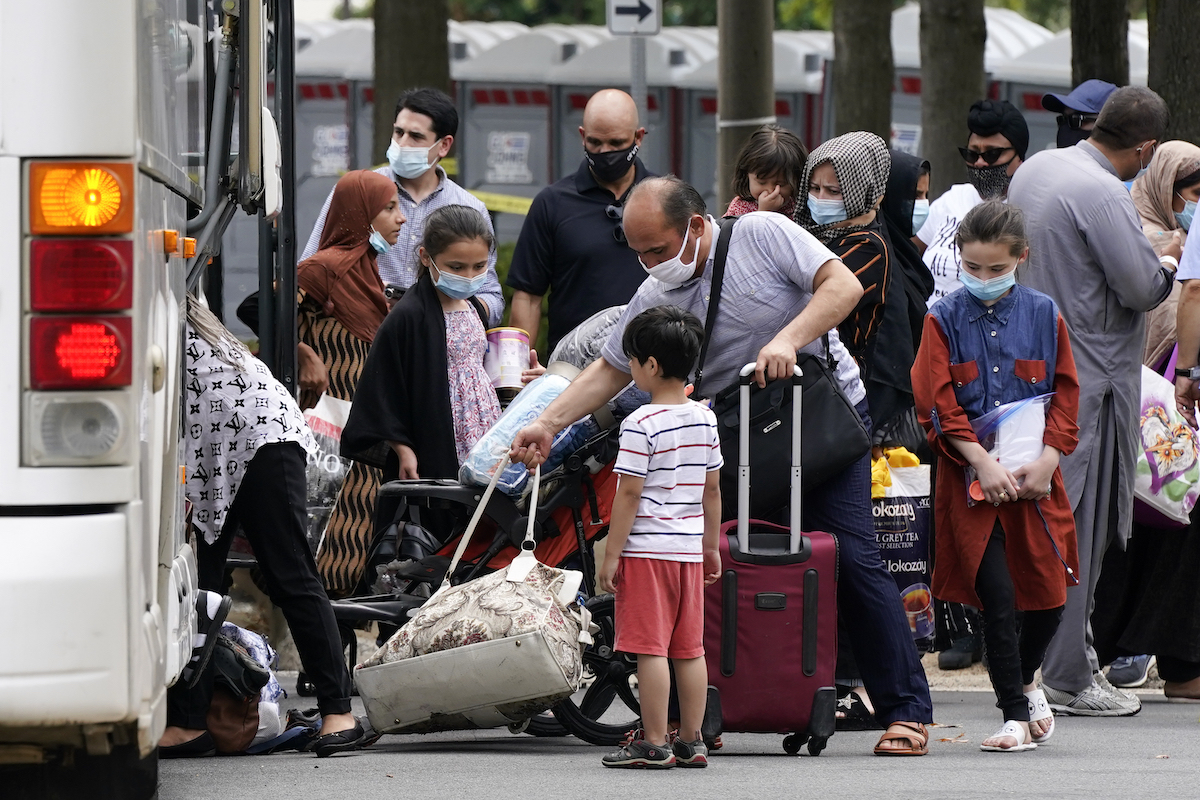 People evacuated from Afghanistan arrive at a temporary housing center in Chantilly, Va., on Aug. 22, 2021, after arriving on a flight at Dulles International Airport. (AP)

State Department spokesperson Ned Price rejected the idea that it was ever fully functional.

"We didn’t get rid of any bureau," Price said Aug. 19. "The bureau was never created. The bureau was proposed by the previous administration in its final days."

"Importantly, when it was conceived, it was not proposed to introduce any new capabilities whatsoever. And that may have been the cause for concern on a bipartisan basis on Capitol Hill. As you know, there were holds on this idea on a bipartisan basis. Republicans and Democrats opposed this. In fact, the memo that explains what this proposal was to do actually was explicit in saying that it would not bring any new capabilities on board. So when this administration came in, we studied the issue. And we determined, just as lawmakers on a bipartisan basis had determined, that a new bureau, a whole new structure, was not the right way to go."

How the idea came and went

Former Secretary of State Mike Pompeo notified Congress of his plan to create the Contingency and Crisis Response bureau in October 2020, weeks before the presidential election.

The intent was to avoid a repeat of the 2012 Benghazi attack, Pompeo told the National Review. The notification he sent Congress said the bureau would provide "aviation, logistics, and medical support capabilities for the department's operational bureaus," the Washington Free Beacon reported.

But when the notification reached the lawmakers in charge of the House Foreign Affairs and Senate Foreign Relations Committees, they stalled action on it, placing the notification on a hold while they sought more information.

A congressional aide to Democratic leadership told PolitiFact that the committees wanted to know more in part because the proposal came weeks before the election, and in part because it would have involved a rapid realignment of millions of dollars of resources.

Leslie Shedd, a spokesperson for Republicans on the House Foreign Affairs Committee, said the party’s committee leadership lifted their hold after Pompeo answered their questions.

The holds of the committees’ Democrats remained in place. Pompeo moved forward with the proposal anyway, a State Department spokesperson told PolitiFact.

Some paperwork was signed and filed, according to the House Foreign Affairs Committee Republicans. And the State Department’s Foreign Affairs Manual, an organizational guide to the agency, lists the bureau as effective as of Jan. 3, when Trump was still in office.

But the State Department said only one staff appointment had been made: Dr. William Walters, who had headed up the Directorate of Operational Medicine within the agency’s Bureau of Medical Services, had been assigned as the new bureau’s coordinator.

When Biden took office, Blinken put a freeze on the establishment of the bureau for the purpose of reviewing it. Ultimately, he resolved to discontinue it. 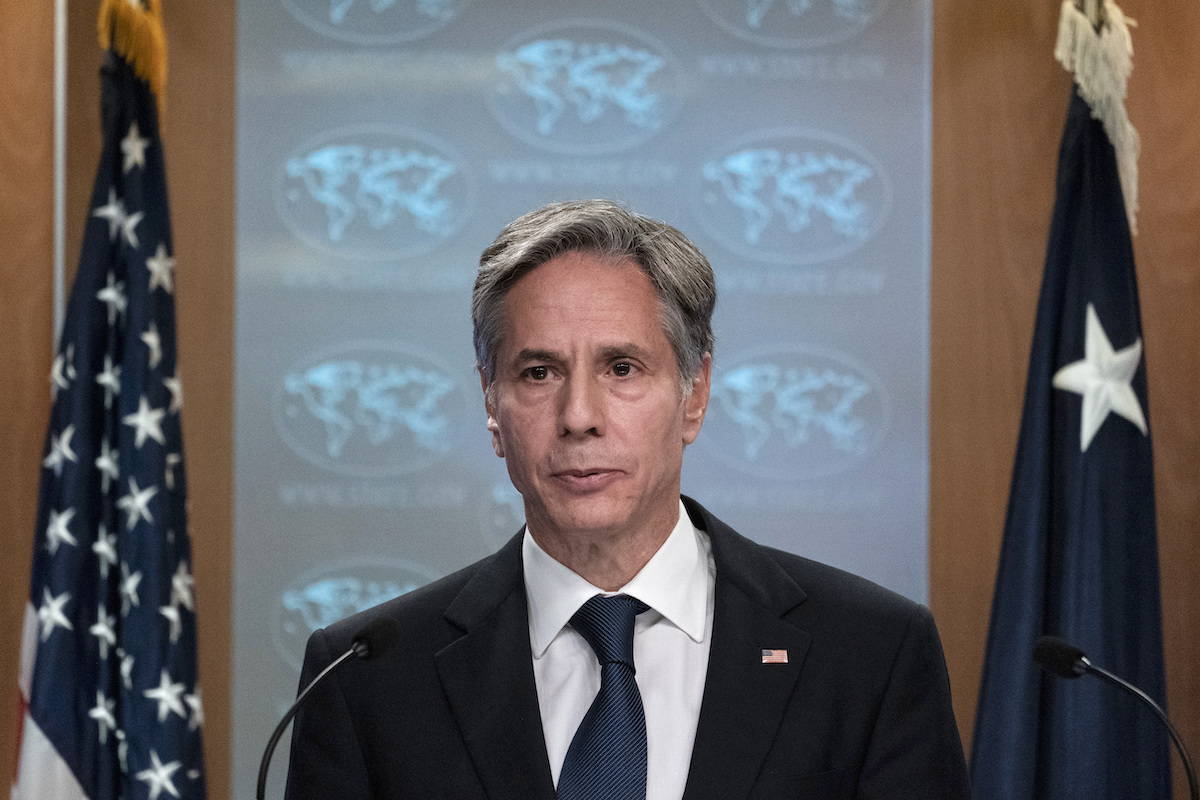 Secretary of State Antony Blinken speaks about Afghanistan during a briefing at the State Department on  Aug. 25, 2021, in Washington. (AP)

"CCR has never been in operation, so it would not have been relevant for the current situation (involving Afghanistan)," said Joseph DeThomas, a professor of international affairs at Penn State University, using an acronym for the Trump-era bureau. DeThomas spent 32 years with the State Department and served as the U.S. ambassador to Estonia from 2001 to 2004.

"The Department of State can do a lot, especially in conjunction with the U.S. military, without a new bureaucratic structure," DeThomas said.

OpMed and an overlapping mission

Some of the duties of the proposed bureau fall under the purview of the Directorate of Operational Medicine, or OpMed.

"OpMed provides the platform and personnel to save American lives around the world, especially in times of crisis," Blinken told a Vanity Fair reporter who spent weeks shadowing the team for a May report. The unit, established in 2013, helped evacuate 100,000 Americans during the early stages of the pandemic, Blinken said.

OpMed is responsible for planning and executing medical contingency plans for "the security of chief-of-mission personnel engaged in high-risk environments worldwide," according to the State Department’s Foreign Affairs Manual.

The OpMed team also maintains standing aviation capability for medical evacuations, the rapid deployment of teams and equipment in emergency situations, and the evacuation of personnel and cargo from posts in crisis, the manual says.

Today, OpMed remains under the Bureau of Medical Services and has the same capabilities it had throughout the pandemic, the State Department told PolitiFact. It is led by the same Dr. William Walters who was to lead the Contingency and Crisis Response bureau.

When a crisis like Afghanistan escalates, the State Department will generally create a task force roping together a number of bureaus, DeThomas said. The military and other agencies also get involved.

All that makes it misleading for Ingraham and others to suggest that the Biden administration got rid of its only resources for evacuating Americans by hitting cancel on the proposed bureau, said Camille Mackler, a senior visiting fellow on immigration at the Truman Center for National Policy.

"This effort is a massive cross-agency, cross-departmental effort," Mackler said. "It wouldn’t have been owned by any one specific department, much less by one sub-bureau."

The White House, "Remarks by President Biden on the Ongoing Evacuation Efforts in Afghanistan and the House Vote on the Build Back Better Agenda," Aug. 24, 2021

Vanity Fair, "Inside the Secretive Government Unit Saving American Lives Around the World," May 6, 2021