It’s rare to see an anchor get up and leave during a TV segment, so the clip was widely shared on social media. It was the latest sign of the network’s sensitivity to threats from Dominion to pursue defamation cases against people circulating falsehoods about the company’s role in the 2020 election.

Lindell, a supporter of former President Donald Trump who became his informal adviser, has claimed for months that the election was stolen. He joined Newsmax’s Bob Sellers and Heather Childers, who asked about Twitter’s recent ban on Lindell’s accounts.

"Well, first mine was taken down because we have all the election fraud with these Dominion machines," Lindell said. "We have 100% proof."

Lindell seemed to be alluding to a baseless conspiracy theory that Dominion’s voting machines illegally flipped votes from Trump to President Joe Biden. The machines were not designed to change votes, and there’s no evidence they did.

Allegations of vote-rigging and election fraud were once common on Newsmax, a pro-Trump TV channel and website. In the weeks following the election, former Trump lawyers Rudy Giuliani and Sidney Powell appeared on the network’s programs to push such claims. So did Lindell.

This time, however, Sellers interrupted Lindell when he brought up Dominion. "Mike, you’re talking about machines," Sellers said over Lindell, who went on speaking even as his words became mostly inaudible. "We at Newsmax have not been able to verify any of those kinds of allegations. We just want to let people know that there’s nothing substantive that we’ve seen."

"Let me read you something here," Sellers continued, turning to read from something on his desk. "The election results in every state were certified. And Newsmax accepts the results as legal and final. The courts have also supported that view."

Sellers tried to steer the conversation back to the Twitter ban and "canceling culture," telling Lindell that he did not want to "relitigate the allegations that you’re making."

But Lindell continued. He accused Newsmax’s anchors of suppressing him and vowed to reveal his evidence against Dominion in the days to come. Sellers asked his producers to end the segment, then got up from his seat and left Childers to close out the interview. 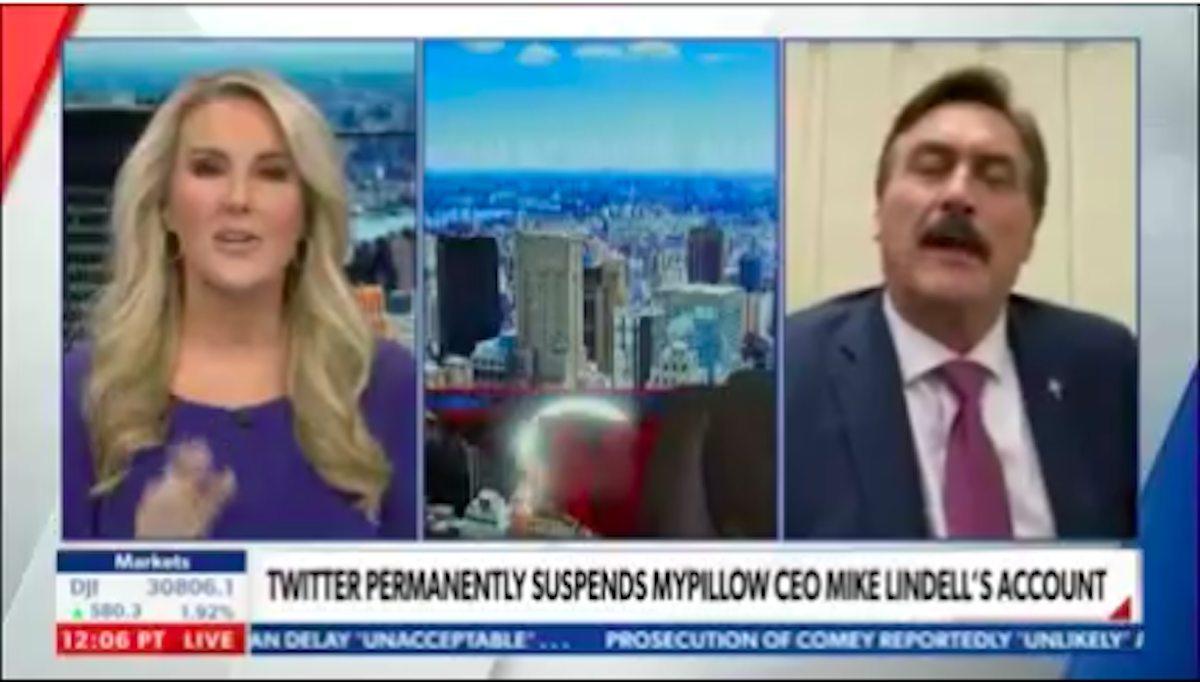 A screenshot of Newsmax TV's "American Agenda" after host Bob Sellers got up from his chair in the middle of a Feb. 2 interview segment with My Pillow CEO Mike Lindell.

"Newsmax and its anchor only wanted to make clear that it has found no evidence of software manipulation involving the election," Newsmax spokesperson Brian Peterson told PolitiFact. "However, Mr. Lindell is entitled to his own opinion and has a different viewpoint than ours."

In a broadcast the following day, Sellers attributed the spectacle to "confusion" over what the topic of the interview would be and said he could have handled things differently

Newsmax brought Lindell back hours after Sellers abandoned his interview to talk to host Rob Schmitt about his Twitter suspension. Lindell did not mention Dominion during that appearance.

"We wanted to make sure we had an opportunity to discuss suppression of free speech with him later in the evening," Peterson said, calling Lindell a "welcomed guest on our shows."

We tried reaching Lindell through MyPillow. The company did not respond to a request for comment.

The looming threat of lawsuits

Looming over the on-air sequence was the fact that Newsmax is facing the threat of legal action from Dominion, which has filed separate defamation lawsuits against Giuliani and Powell seeking $1.3 billion over their claims about the company. That’s key context for viewers who may have been confused when Sellers read what sounded like a legal disclaimer.

A similar episode played out in December, when both Newsmax and Fox News ran segments debunking their own coverage on Dominion and another voting systems firm, Smartmatic.

On Dec. 19, Newsmax posted a statement to its website to "clarify its news coverage and note it has not reported as true certain claims made about these companies" by guests on its shows.

"No evidence has been offered that Dominion or Smartmatic used software or reprogrammed software that manipulated votes in the 2020 election," the network said. A Newsmax host later read the entire statement out loud during a Dec. 21 broadcast, as PolitiFact reported.

The statement came after Dominion demanded retractions and instructed Newsmax executives to preserve records on Dec. 18. A search of the TV monitoring service TVEyes showed more than 700 mentions of "Dominion" on Newsmax between the Nov. 3 election and that day.

In a pair of letters sent on Dec. 22 and shared with PolitiFact, Dominion’s lawyers said that litigation is "imminent," and that they were "disappointed" that Newsmax did not retract "the falsehoods from its previous broadcasts and online articles."

"Your failure to retract these articles removes any doubt that Newsmax is defaming our client with actual knowledge that its claims are completely false," one of the letters said.

Proving that someone knowingly made or aired a false statement is key to winning defamation and libel cases, said Ryan Calo, a law professor at the University of Washington. The statement Sellers read may have been meant to guard Newsmax against charges that it brought Lindell on knowing he would make false claims about Dominion.

"Other than not inviting such a person on your program, you can inoculate yourself against lawsuits by disclaiming the content," Calo said. "It seems like that’s what they were trying to do."

For months, Dominion has fought baseless claims that it worked to change the election result, devoting an entire page on its website to addressing various allegations of fraud.

PolitiFact has debunked several false rumors about the company, including claims that it flipped votes; that it was shut down; that it is owned by the late Venezuelan president Hugo Chavez; that the military raided a company tied to it; and that it counted votes in foreign countries.

No lawsuit against Newsmax has been filed to date, but a spokesperson for Dominion said the company is working to hold all responsible parties accountable for false claims that sought to undermine faith in the election, hurt Dominion’s reputation and subjected its employees to harassment and death threats.

"A lot of folks handed (Giuliani and Powell) a megaphone, and a very loud megaphone, on cable news shows and on the internet. And we are looking at each and every one of them," said Tom Clare, a lawyer representing the company, during a Jan. 26 interview with CNN.

Dominion’s lawyers also sent letters to Lindell on Dec. 23 and again on Jan. 8 warning of imminent litigation. Lindell has said publicly that he would welcome a lawsuit, and Clare said Jan. 25 that he thinks Lindell "will eventually get his wish."

PolitiFact, "No, Myanmar didn’t use Dominion Voting Systems for its election," Feb. 2, 2021

PolitiFact, "No proof that voting system in Michigan was designed to ‘create systemic fraud,'" Feb. 1, 2021

PolitiFact, "No, AT&T was not conducting an audit of Dominion Voting Systems near Nashville explosion," Dec. 29, 2020

PolitiFact, "No, Hugo Chavez’s family does not own Dominion Voting Systems," Dec. 3, 2020

PolitiFact, "Dominion and Smartmatic haven’t shut down, and its executives aren’t 'on the run,'" Nov. 24, 2020

PolitiFact, "No, US military did not raid election software company tied to Dominion," Nov. 17, 2020

Phone interview with Ryan Calo, professor of law and co-director of the Tech Policy Lab and the Center for an Informed Public at the University of Washington, Feb. 3, 2021