What the Equality Act debate gets wrong about gender, sex

On one side of the Capitol Hill hallway is a pink and blue flag, a symbol for transgender pride. Directly across is a sign that says: "There are TWO genders: male & female. ‘Trust the science!’"

"Thought we’d put up our transgender flag so she can look at it every time she opens her door," tweeted Rep. Marie Newman, D-Ill., who has a transgender daughter.

"Thought we’d put up ours so she can look at it every time she opens her door," tweeted Rep. Marjorie Taylor Greene, R-Ga.

Their dispute is a microcosm of a larger debate over the Equality Act, a Democratic proposal to prohibit discrimination based on sexual orientation and gender identity. Newman supports the bill; Greene opposes it.

Supporters say the Equality Act provides overdue anti-discrimination protections for LGBTQ Americans who in many states can be denied housing and access to other services based on their identity. Some opponents say that the proposal infringes on the rights of faith-based organizations.

Thought we’d put up ours so she can look at it every time she opens her door 😉🇺🇸 https://t.co/7joKpTh6Dc pic.twitter.com/aBGRSiIF6X

Much of the political debate has centered on gender identity — particularly Greene’s notion that there are "two genders." However, public health agencies, doctors and biologists say science is clear: Gender identity goes beyond male and female.

"Sex is a biological term, gender is a social construct," said Ignacio T. Moore, a biological sciences professor at Virginia Tech. "In other words, gender can vary with society and culture."

The belief that there are only two genders is an oversimplification, "and what science really tells us is that it is more complicated," said Dr. Jason Rafferty, a clinical assistant professor at Brown University.

What’s in the Equality Act?

The Equality Act, which passed the House largely along party lines, would amend the 1964 Civil Rights Act by prohibiting discrimination on the basis of sex, sexual orientation and gender identity.

The Equality Act would supersede the 1993 Religious Freedom Restoration Act, a law intended to protect religious practices from government interference. (The U.S. Supreme Court decided in 1997 that the federal law did not apply to states, prompting some states to pass their own version of the law.)

If the Equality Act became law, private businesses that are open to the public — including retail stores such as bakeries and flower shops — would not be permitted to deny service to LGBTQ people by claiming it violates their religious beliefs. The bill applies to employment, education, housing, credit, jury service, public accommodations, and programs that receive federal funding.

Senate Majority Leader Chuck Schumer, D-N.Y., said he would bring the legislation to a vote on the Senate floor, and President Joe Biden promised to sign the Equality Act. 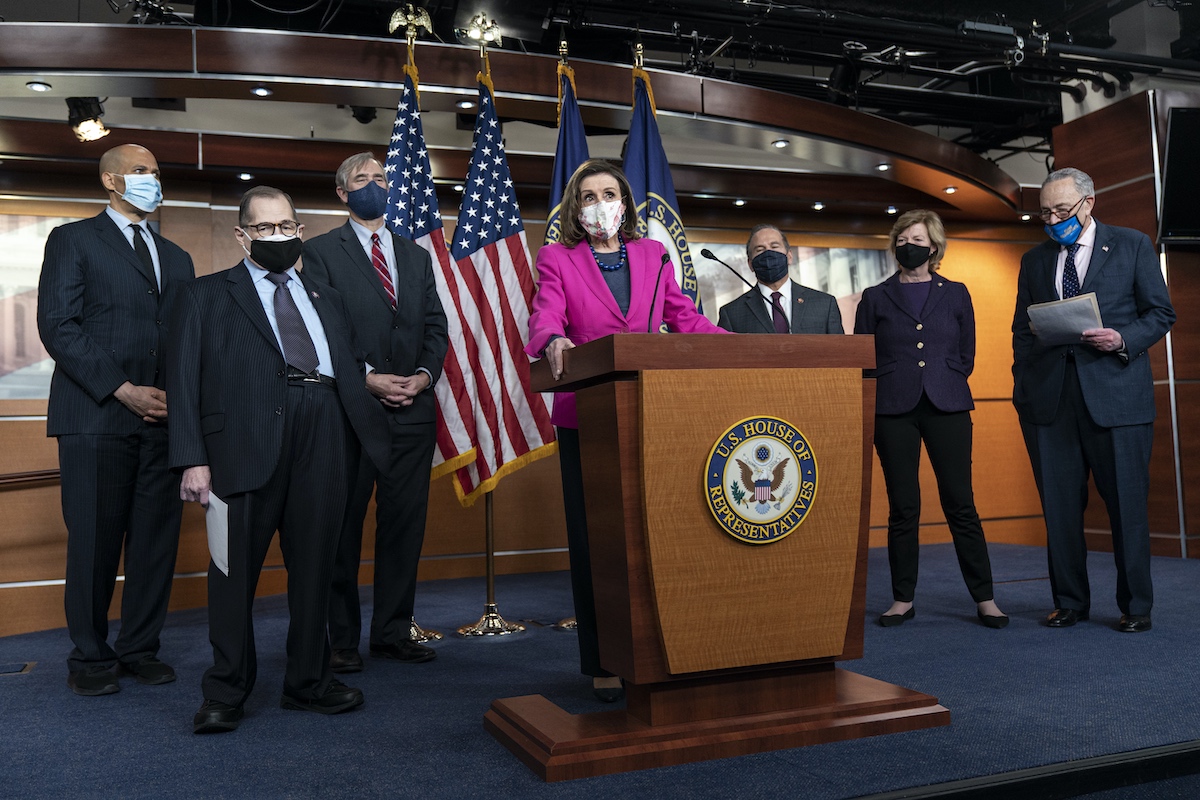 House Speaker Nancy Pelosi, center, speaks about the Equality Act on Feb. 25, 2021, with Rep. Jerry Nadler, D-N.Y., and other lawmakers on Capitol Hill in Washington. (AP)

The Centers for Disease Control and Prevention has a list of terminology associated with sex and gender, acknowledging that terms and definitions "may change over time."

Gender refers to "the cultural roles, behaviors, activities, and attributes expected of people based on their sex," according to the CDC. Gender is not assigned at birth — it derives its meaning from the society in which one lives.

"Human nature is diverse in many ways that goes beyond simply biological and anatomical differences between people, and we are coming to understand that gender is such a characteristic that can be both complicated and personal," Rafferty said. "A person’s gender identity may be masculine, feminine, a combination of both or neither, or it may shift over time."

Cisgender is the term used to describe someone whose gender aligns with the sex they were assigned at birth, such as biological males who identify as men. There are numerous other ways for people to describe their gender identity, including nonbinary (individuals who identify as neither a man nor a woman) and transgender (individuals whose gender differs from the sex they were assigned at birth).

A February Gallup poll found that 5.6% of U.S. adults identify as LGBTQ, and 0.6% identify specifically as transgender. Gallup noted that those numbers could underestimate the actual population, as older adults may be less likely to self-identify as LGBTQ.

Sexual orientation is often conflated with gender identity and sex, said Karen Parker, director of the Sexual & Gender Minority Research Office at the National Institutes of Health. But all three categories are distinct, and sexual orientation primarily "relates to identity attraction and behavior," she said.

Sex is not the same as gender

The World Health Organization says sex refers to "the different biological and physiological characteristics of females, males and intersex persons, such as chromosomes, hormones and reproductive organs."

One might think that sex is a trait with only two biological possibilities. But medical research and firsthand accounts indicate that strictly male and female sex characteristics are not the only outcomes.

The biological sex of humans is partially determined by the configuration of chromosomes, the long strands of DNA that contain the genetic information of an organism. If you’re born with two X chromosomes, your biological sex will most likely be female. Biological males typically have one X and one Y chromosome. 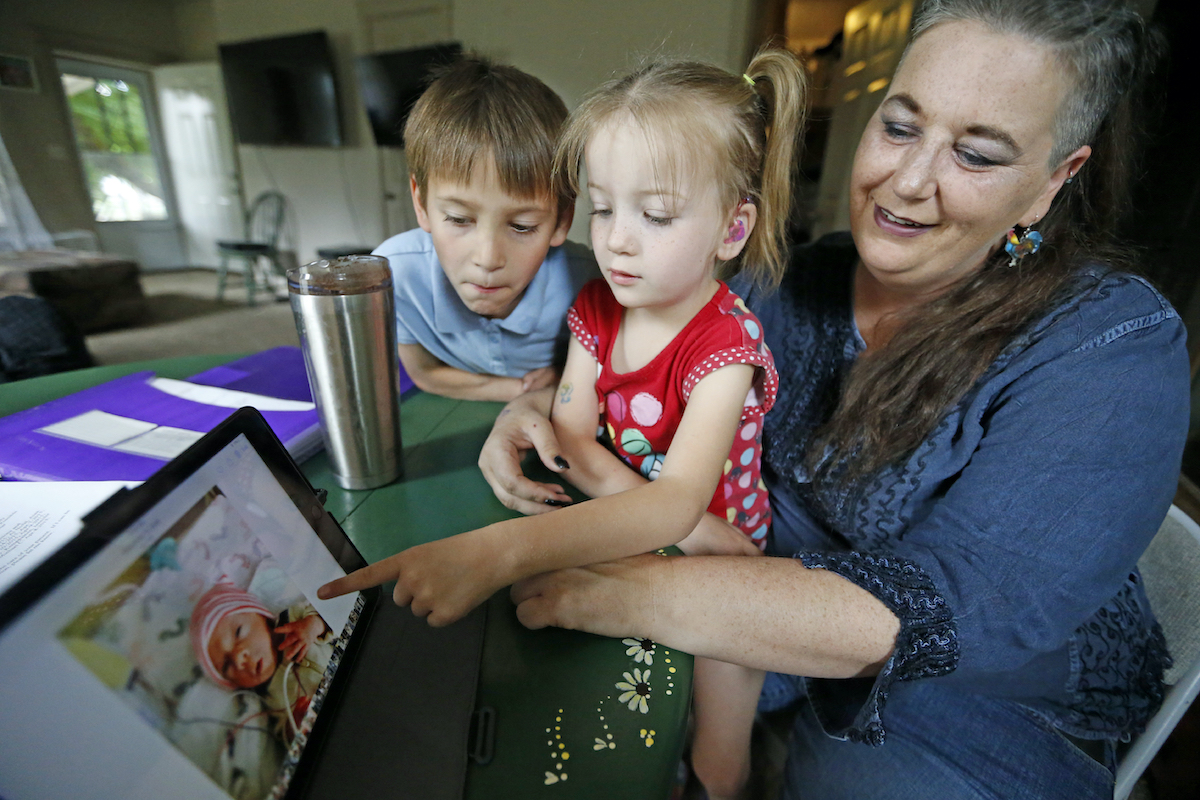 In this June 6, 2019, photo, Victory, an intersex girl, points to her baby photo, as her brother Richard and her mother Amie Schofield look on, at their home in Ogden, Utah. (AP)

Sometimes, there’s a discrepancy between someone’s sex assigned at birth and their biological, physiological or physical characteristics. Intersex is a term that’s used to describe any variation in sex characteristics, which can sometimes be related to chromosomes and hormones.

Moore offered some examples that could result in someone being intersex:

"With these factors in mind," Moore said. "I think it becomes clear that an individual’s sex is not necessarily binary, as factors can conflict."

Estimates for the proportion of babies who are born intersex range from 0.018% to 1.7%, depending on how intersex is defined.

Nature provides variations in sex and humans decide how to categorize them, said Alice Dreger, a bioethicist who has researched differences of sex development. "Nature doesn’t tell us who counts as male, who counts as female and who counts as intersex — we draw those lines," she said.

"The big thing to remember is that it’s not just politics," Rafferty said. "These are people’s lives."

RELATED: Rachel Levine does not support gender confirmation surgery for all children

Alice Dreger, "Hermaphrodites and the Medical Invention of Sex"

American Journal of Human Biology, "How sexually dimorphic are we? Review and synthesis," Feb. 11, 2000

Anne Fausto-Sterling, "Sexing the Body: Gender Politics and the Construction of Sexuality"

Interview with Karen Parker, director of the Sexual & Gender Minority Research Office at the National Institutes of Health, March 2, 2021

The Journal of Sex Research, "How common is lntersex? A response to Anne Fausto‐Sterling," Feb. 5, 2002

Letter from the United States Conference of Catholic Bishops, Feb. 23, 2021

National Institute of Child Health and Human Development, "What are the symptoms of congenital adrenal hyperplasia (CAH)?"

Quartz, "An intersex shark discovered near Taiwan shines a light on fluidity in the animal kingdom," Dec. 27, 2017