Americans who want to go to concerts, fly on certain airlines or attend weddings in the next few months may have to prove they’ve been vaccinated against COVID-19. That approach has recently become a target for online misinformation and political spin.

Fox News host Tucker Carlson called the idea of vaccine passports "Orwellian" and said it could worsen vaccine hesitancy. Florida Gov. Ron DeSantis said it’s "completely unacceptable" for the government or businesses to ask Americans for proof of vaccination. Other conservative politicians and pundits have criticized vaccine passports as "unconstitutional" and a "government overstep."

"Why vaccine passports equal slavery forever," says the caption of a March 29 video with more than 42,000 views.

"Democrats want you to show a vaccine passport to go about your daily life," says a March 29 post in a group for supporters of former President Donald Trump.

"Americans may soon need a vaccine passport to travel but unvetted, undocumented and unvaccinated migrants are allowed to invade our southern border? Got it — only in Biden’s America," Fox Nation host Tomi Lahren said in a video published March 30. (The claim about an open border is False.)

Some of the rhetoric deviates from what’s in the works. The Biden administration has not proposed requiring vaccination against COVID-19, nor has it advocated for a nationwide vaccine passport. Instead, officials say they are working with private companies on more than a dozen vaccine passport initiatives.

As millions of Americans are vaccinated each day and states expand eligibility to everyone older than 16, you may be wondering what the concept and the controversy are all about. Here’s what you need to know.

What are vaccine passports?

A vaccine passport is a record of someone’s vaccination history.

Americans who receive one of the three COVID-19 vaccines authorized for emergency use receive a card from the Centers for Disease Control and Prevention. The card lists the vaccine that was used as well as the date and location where it was received.

Vaccine passports and digital certificates are similar. Some businesses — including arts and entertainment venues like Madison Square Garden in New York City — are using smartphone apps to confirm that customers have been vaccinated against COVID-19. Similar to a boarding pass, the apps present a QR code for businesses to confirm customers’ vaccination status. 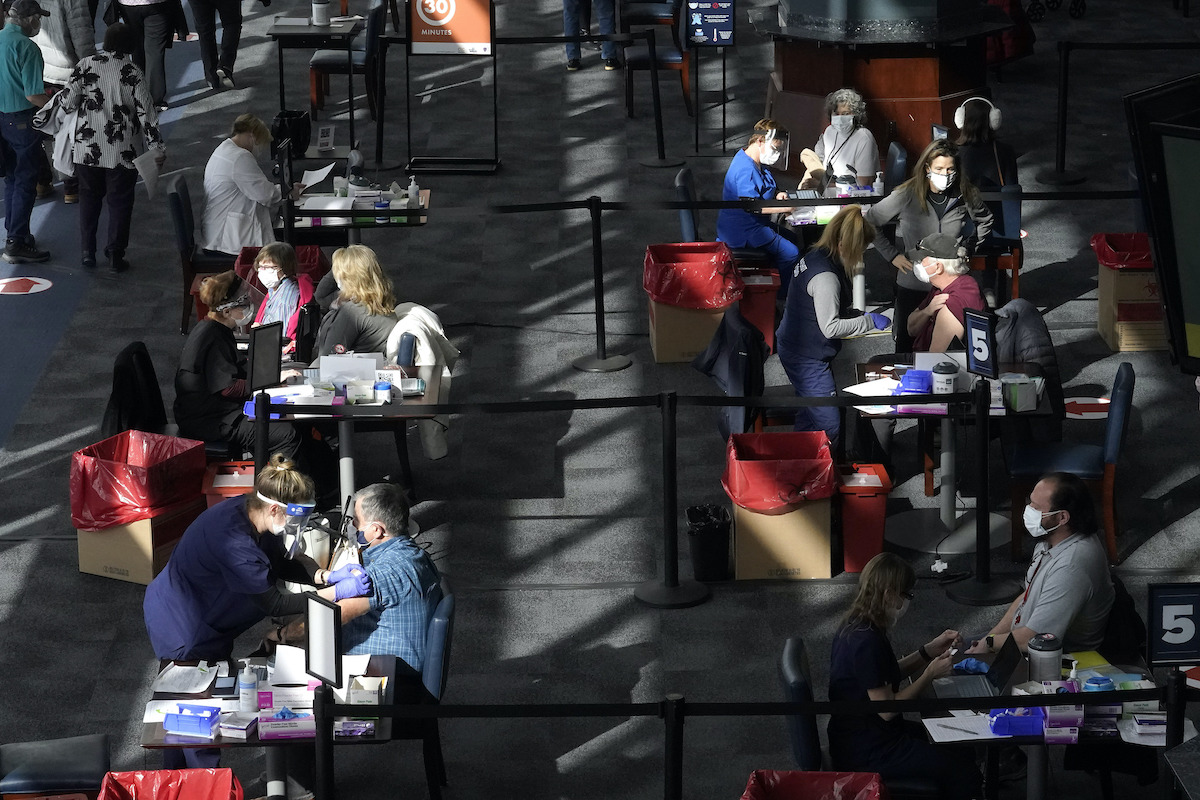 People are administered COVID-19 vaccine on Feb. 11, 2021, at a vaccination center, at Gillette Stadium, in Foxborough, Mass. (AP)

"The idea is to give people a way to show they have been vaccinated whenever they are doing something that does in fact require evidence of immunization," said Sara Rosenbaum, a health law and policy professor at George Washington University. "The concept does not mean that the government is going to impose vaccination as a condition of anything. It is just a handy (likely apps) way of having evidence of immunization at the ready should you or your children need it."

Vaccination records are required for certain jobs, school registration and travel abroad. The World Health Organization requires travelers to be inoculated against yellow fever, and some countries have additional vaccination requirements, such as for the poliovirus. Immigrants to the U.S. must be vaccinated against a slew of diseases.

What has the government proposed?

In January, President Joe Biden signed an executive order directing federal agencies to assess the feasibility of linking COVID-19 vaccination status to International Certificates of Vaccination or Prophylaxis, which are administered by the WHO. Andy Slavitt, a senior adviser for the Biden administration’s COVID-19 response, said vaccine passports should be secure, free, available in multiple languages — and developed by private businesses.

"Unlike other parts of the world, the government here is not viewing its role as the place to create a passport, nor a place to hold the data of citizens," Slavitt said during a March 29 press briefing. "We view this as something that the private sector is doing and will do."

RELATED: Ask PolitiFact: How can COVID vaccines be safe when they were developed so fast?

That’s different from countries like Israel, where state-sanctioned Green Pass lets fully vaccinated citizens sit inside at restaurants and attend events at stadiums and arenas. In the U.S., some states are pushing ahead with their own systems, such as New York’s Excelsior Pass, an app that lets people bypass the state’s restrictions on large in-person gatherings.

Press secretary Jen Psaki said the Biden administration is working on creating guidance through the CDC.

"There are a couple key principles that we are working from," she said. "One is that there will be no centralized, universal federal vaccinations database and no federal mandate requiring everyone to obtain a single vaccination credential. Second, we want to encourage an open marketplace with a variety of private sector companies and nonprofit coalitions developing solutions. And third, we want to drive the market toward meeting public interest goals."

How could they affect life after the pandemic?

Vaccine passports could be your ticket to resuming some semblance of normalcy after the coronavirus pandemic.

"One way to think about vaccine passports is to consider them a get-out-of-jail card that allows people who have had vaccinations to return to pre-pandemic life while potentially protecting people who have not been vaccinated," said Dr. Seema Yasmin, director of the Stanford Health Communication Initiative.

In the U.S., private businesses are generally allowed to create rules for their customers. As the pandemic winds down, some businesses may want their customers to prove that they’re vaccinated against COVID-19. Legal experts have likened vaccine passports to a "no shirt, no shoes, no service" policy.

Airlines like Air France and American Airlines are testing platforms like the IATA Travel Pass, AOKpass and CommonPass to verify passengers’ vaccination or testing status.

Companies like TicketMaster are exploring the idea of letting vendors use vaccine passports to vet concertgoers.

New York already requires citizens to provide proof of vaccination or a negative COVID-19 test before attending weddings, and other states may soon follow.

"We hope that in the coming two to three months, all adults in the United States who choose to be vaccinated will be vaccinated," said Dr. William Moss, executive director of the International Vaccine Access Center at Johns Hopkins University. "Vaccine passports could permit large, indoor gatherings to take place safely before community transmission is reduced to very low levels."

Are there concerns about vaccine passports?

For as much as they could do to support reopenings in the U.S., experts say vaccine passports could also contribute to discrimination and create privacy problems.

Vaccination data in the U.S. show that, in cases where race and ethnicity is known, nearly two-thirds of Americans who have received the coronavirus vaccine are white. White people have also received a "higher share of vaccinations compared to their share of cases and deaths," according to the Kaiser Family Foundation.

Implementing vaccine passports could exacerbate some of those divisions, experts say.

Then there are unknowns about the three vaccines used in the U.S., including how they affect the transmission of COVID-19 or how long that protection might last, Yasmin said.

Vaccine passports could also pose a risk to sensitive health data. Israel’s Green Pass, for example, initially had a flaw that sent users’ health information to a private Gmail address whose password had been leaked.

"Although they could be paper-based, most work has been on developing digital vaccine passports that have special privacy challenges," Moss said. "And we also need to ensure that it is not simple to create fraudulent passports."

RELATED: False vaccine claims persist on Facebook, despite a ban. Here’s why

Bloomberg Businessweek, "A Vaccine Passport Is the New Golden Ticket as the World Reopens," March 25, 2021

Centers for Disease Control and Prevention, "Getting Your COVID-19 Vaccine"

Centers for Disease Control and Prevention, "The Vaccination Records: Finding, Interpreting, and Recording"

CNN, "All 50 states now have expanded or will expand Covid vaccine eligibility to everyone 16 and up," March 30, 2021

Email interview with Kristen Nordlund, a spokesperson for the Centers for Disease Control and Prevention, March 31, 2021

Haaretz, "Israel Rolls Out 'Green Passport' for Vaccinated. It's a Security Disaster," March 2, 2021

PolitiFact, "No, you don’t need a WHO vaccination certificate to travel internationally," March 22, 2021

University of California-Riverside, "This is the dawning of the age of the vaccine passport," March 24, 2021

USA Today, "New York launches nation's first 'vaccine passports.' Others are working on similar ideas, but many details must be worked out." March 26, 2021

The Washington Post, "‘Vaccine passports’ are on the way, but developing them won’t be easy," March 28, 2021