In the days after a deadly missile strike blasted a railway station in the eastern Ukrainian city of Kramatorsk, a viral online video — dressed as a news report — sought to pin the blame on Ukrainian forces.

The one-minute-27-second video claiming that Ukrainian forces had bombed their own station was stamped with the branding and logo associated with BBC News, the London-based broadcast network.

But the clip was a fake.

"We are aware of a fake video with BBC News branding suggesting Ukraine was responsible for last week’s missile attack on Kramatorsk train station," the BBC press office said in a statement on Twitter at the time. "The BBC is taking action to have the video removed." 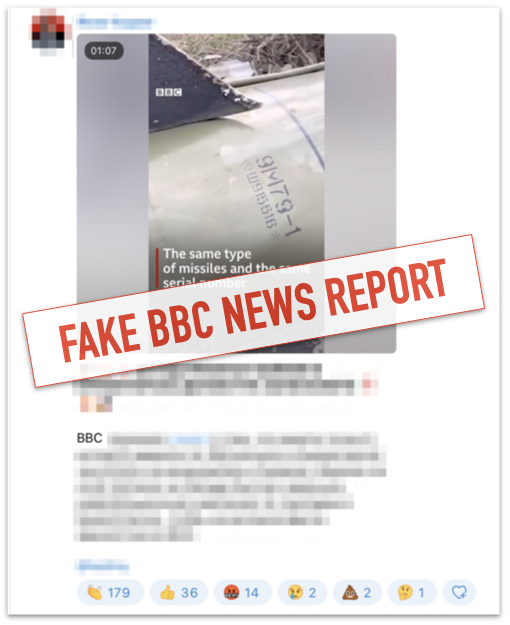 The phony BBC News video spread widely as Russian state media broadcast it on TV and the web and Kremlin-aligned accounts shared it across the messaging app Telegram. The Atlantic Council’s Digital Forensic Research Lab, which tracks and researches disinformation, identified at least 30 channels on Telegram that shared the clip or screenshots of it.

A few days later, several reporters said they spotted pro-Russia Telegram channels circulating yet another fabricated post posing as a BBC News report. This one was a fake tweet that shared a made-up quote supposedly attributable to French President Emmanual Macron. 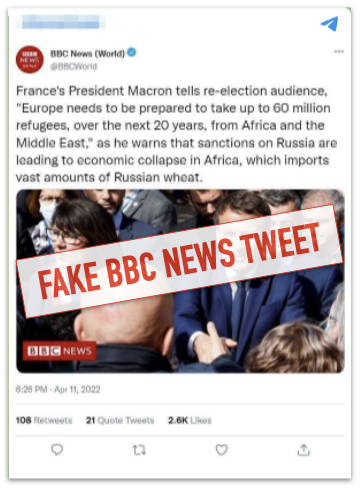 In the nearly two months since Russia invaded Ukraine, hoax videos, reports and tweets pretending to come from the BBC and CNN have popped up repeatedly on Telegram and other platforms. Sometimes the main purpose is to spread false claims, aiding Russian efforts to sow disinformation about the war. Sometimes it’s to make the outlets look bad.

"This is all part of the social media information war," said Scott Radnitz, an associate professor of Russian and Eurasian studies at the University of Washington. "CNN and BBC are among the few trusted international gatekeepers, so it makes sense that partisans in the Ukraine war would leverage the credibility of these outlets to spread false messages."

It’s not clear whether the fabricated BBC posts about Kramatorsk and Macron were mocked up by the Kremlin or simply shared by Russia-friendly social media accounts. The Guardian reported that the Kramatorsk clip appeared to originate on pro-Kremlin Telegram channels.

Other shares are much less orchestrated.

"The low cost of faking television screenshots, especially low-quality ones like those that have been debunked, means almost anyone can do it," Radnitz said.

Days after the war started, for example, a viral post falsely claimed to show a tweet from CNN saying that actor Steven Seagal was seen alongside Russian forces. The imposter tweet took off after it was shared by Spotify podcast host Joe Rogan. 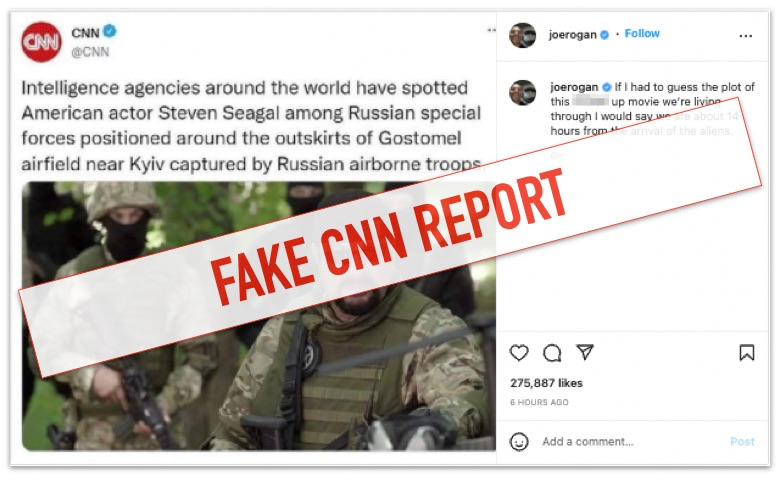 Another fake CNN broadcast was doctored to show a chyron — text that appears in the lower area of the TV screen — saying the Ukraine invasion was causing myocarditis. It went viral after social media users ripped it without attribution from the Babylon Bee, a satire site. And yet another fake report, which was altered to make it look like CNN described the war as "fiery but mostly peaceful," was a new spin on a years-old meme.

Social media users have hit both outlets with false accusations of staging scenes from the war. They have also passed around imposter posts that purported to show screenshots of:

"It seems like these screenshots are focused on either distracting the public from what is going on in Ukraine or are focused on making certain politicians and state actors in Europe look bad," said Josephine Lukito, an assistant professor at the University of Texas at Austin’s School of Journalism and Media whose work has focused on the impact of Russian disinformation. "These fake screenshots have an added ‘bonus’ of also making news organizations look bad."

Russian accounts, media and officials have capitalized on at least some of the doctored images floating around the internet to cloud the narrative and make all news seem suspect.

In March, for example, a Russian representative to the United Nations tweeted out a warning about alleged "lies and fakes" from the mainstream media. But as evidence, the official pointed to a pair of tweets from accounts that were impersonating CNN accounts, CNN’s fact-checking unit reported. The tweets were made-up, created on imposter accounts to make it look like CNN had reported on the same man’s death in relation to two different wars.

The country’s interest in such content fits in line with previous disinformation efforts, Lukito said.

"In the past, Russian trolls have pretended to be not-real news organizations and have successfully gotten quoted in U.S. news stories," Lukito said. "So the use of fake screenshots appears to be their latest iteration of these tactics."

Now, the dissemination of fake BBC and CNN content and other false war claims has turned Telegram into a "social media battlefront," Radnitz said. It is one of the only social platforms still accessible in Russia under draconian new laws aimed at quieting dissenting narratives.

"People outside Russia seek to ‘open the eyes’ of ill-informed Russians, and pro-Russian TV channels play both offense and defense to ensure that the Kremlin's message gets out and alternative narratives are discredited," Radnitz said.

How to avoid being duped

Images that have been edited to masquerade as posts from BBC News, CNN or other news organizations are a potent form of misinformation, because they are cheap and easy to create.

A fake image can be hard to trace back to its original source, and debunking it can require typing its text into a search engine to see if it's real — a potentially time-consuming step.

Still, there are often telltale signs that an alleged broadcast, report or tweet isn’t authentic.

The fake video purporting to show a BBC News report about the Kramatorsk attack featured some inconsistencies with the placement of logos, location tags and style, PolitiFact reported. Other signs of doctoring can include bad grammar, odd fonts, mismatched dates and times, misaligned texts, and headlines that don’t appear on the publisher’s website.

A BBC spokesperson said the organization’s BBC Monitoring and Reality Check teams frequently find and debunk fake posts impersonating the broadcaster’s content. A spokesperson for CNN said its fact-checking reporters do the same, and that the network also flags fake posts to the social platforms and responds from its press account when such posts become widespread.

But the outlets alone can do little to fix the problem, Lukito said.

"With the internet, it's become quite easy to share misinformation across borders," Lukito said. "Generally, I encourage people to distrust what they see in screenshots unless it has an attribution or link to more tangible information."

The Babylon Bee, "Media Says Spike In Myocarditis May Be Linked To Ukraine Crisis," March 7, 2022

PolitiFact, "CNN did not tweet about children in Ukraine signing up to fight in the war," April 19, 2022

PolitiFact, "No evidence that Ukraine attacked a train station in one of its cities," April 18, 2022

PolitiFact, "No, this Edmonton jacket isn’t proof CNN staged a fire as part of its Ukraine coverage," March 28, 2022

PolitiFact, "Action star Steven Seagal is a friend of Putin, but not a soldier in Ukraine," Feb. 28, 2022

Email correspondence with Corrine Corrodus, spokesperson for the BBC, April 21, 2022

Email interview with Scott Radnitz, associate professor of Russian and Eurasian studies and director of the Ellison Center for Russian, Eastern European, and Central Asian Studies at the University of Washington, April 20, 2022

Email interview with Josephine Lukito, assistant professor at the University of Texas at Austin’s School of Journalism and Media, April 20, 2022