Candles are lit at dawn on May 27, 2022 at a memorial site in the town square for the victims killed at an elementary school shooting in Uvalde, Texas. (AP)

Friday, May 27, was supposed to be the first full day of summer break for the students and staff of Robb Elementary School in Uvalde, Texas.

Instead, it marked the end of a brutal week marred by loss, grief, heartbreak and anger, after 19 children and two teachers were killed at the school on May 24 by an 18-year-old shooter.

The attack was the deadliest school shooting in the U.S. since a gunman killed 20 children and six adults at Sandy Hook Elementary School in Newtown, Connecticut, in December 2012.

The shooting became the focus of a wave of viral misinformation, fueled, in part, by the fact that details about the shooting and the police response have conflicted or changed over time.

PolitiFact has written more than a dozen fact-checks related to the shooting and has compiled a guide for avoiding misinformation about mass shootings. Media literacy experts recommend that you slow down, verify what you see online before you share it, and take care to ensure that you don’t fall into the trap of believing that information is true just because it was shared by someone with a large following.

Below is a round-up of our fact-checking, which debunks misinformation about the shooting and evaluates the veracity of comments that public figures made in response to the attack. Have a post or claim that you want us to fact-check? Send it to [email protected].

False claims about the Uvalde shooter

Authorities identified 18-year-old Salvador Ramos as the gunman who shot and killed 21 people at Robb Elementary School. Ramos was killed at the scene by law enforcement. False claims about the shooter’s identity spread online.


Fact-checks of public figures’ remarks after the shooting

As news of the shooting broke, some quickly made claims about mass shootings and about the effectiveness of policies meant to improve safety or reduce gun violence.

False: Sen. Ted Cruz said "the most effective tool for keeping kids safe is armed law enforcement on the campus." There are no studies that show that the presence of armed officers prevents school shootings. https://t.co/RSTCKgoGLE pic.twitter.com/HtM5LIfxaR

A false flag is a harmful action, such as an attack, that is designed to look like it was perpetrated by one person or group, when in fact it was committed by someone else. Following mass shootings, we often see unfounded claims that the attack was a false flag devised by governments seeking to enact gun control laws.

False claims about the victims, what happened on scene 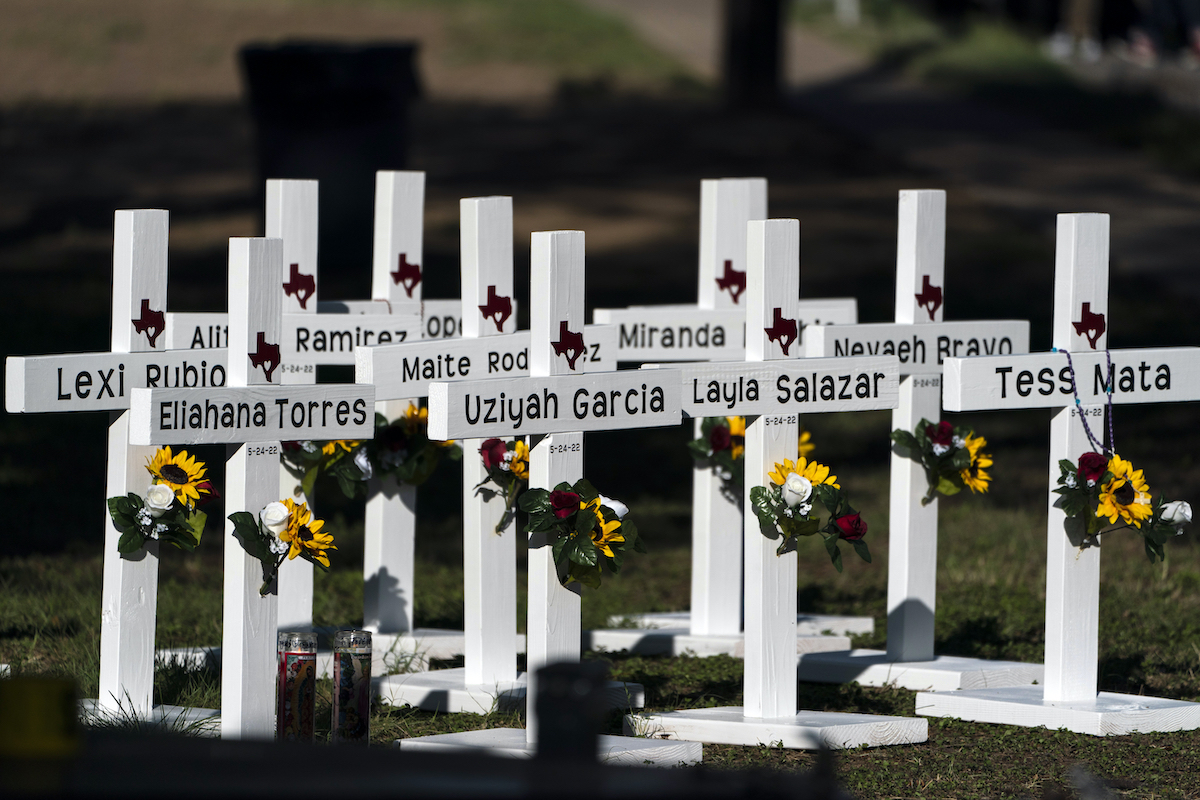 Crosses with the names of the May 24 school shooting victims are placed outside Robb Elementary School in Uvalde, Texas on May 26, 2022. (AP)

Information is still emerging about what happened at Robb Elementary, but some claims made about the victims and what happened on scene have been debunked.

We fact-check inaccurate statements from people in power, regardless of political party. Support the truth today.

RELATED: Here’s how to avoid misinformation as you read about Uvalde and other mass shootings