Hillary Clinton
stated on February 24, 2015 in a conference in Silicon Valley:
"You had more women getting computer sciences degrees in the '80s by a factor of 2-plus than you do now."

Hillary Clinton speaks at the Lead On Watermark Silicon Valley Conference for Women on Feb. 24, 2015.

In a public appearance during her not-yet-announced presidential campaign, former Secretary of State Hillary Clinton spoke before an audience in Silicon Valley to beta-test some economic messages.

At one point, Clinton mentioned the challenges facing women in the historically male-dominated field of computing. She capped this reference with a surprising statistic: "You had more women getting computer sciences degrees in the '80s by a factor of 2-plus than you do now. … Why aren't more girls and women going into this field? What was different about being a high school or college student in the '80s than it is today? I think we need to unpack that."

Is it really true that the mid 1980s were a golden age for women in computing, and that it’s been all downhill since then?

What the numbers show

When we contacted Clinton’s staff, a spokesman declined to comment. But we were able to find some official data tracking these trends, thanks to Randy Olson, a Ph.D. candidate in Michigan State University's computer science program who had blogged about this topic.

First, let’s look at a graph Olson assembled that shows the percentage of bachelor’s degrees conferred to women in the United States between 1970 and 2012, separated out by major. The second-to-lowest category on the chart, in a shade of light gray, is computer science. 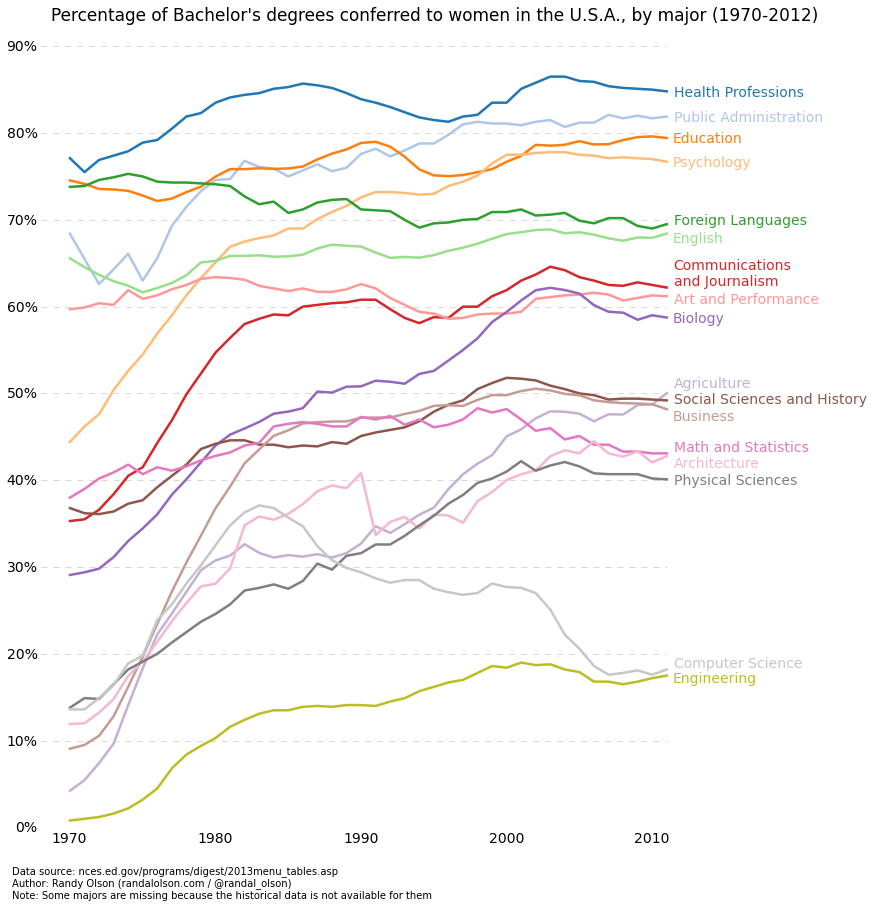 The graph makes it easy to see the general trend for women in computer science. The percentage of all computer-science degrees that went to women rose from less than 5 percent in 1970 to nearly 40 percent in the early-to-mid 1980s. Then, it began falling steadily, sinking to below 20 percent in the most recent data a few years ago.

So Clinton has captured the general trend correctly. But after looking at the original data source for Olson’s chart -- a table from the federal Department of Education -- Clinton's numbers are a bit off. Here’s a summary for the relevant years:

If you use the raw numbers of women earning bachelor’s degrees in computer science, the ratio from the 1980s to today never quite reaches goes above 2-to-1, as Clinton said it did. The highest it gets is 1.76-to-1. That said, 1.76-to-1 is not that far off from 2-to-1.

Clinton is slightly more accurate when using the percentage of all computer-science bachelor's degrees going to women. Using that statistic, she's correct for two years out of the 10 that decade, and she’s pretty close for several of the other eight years.

In one sense, though, Clinton underestimates how much ground women lost in computer-science bachelor’s degrees over this period. Since 1983-84, the number of women earning bachelor’s degrees in any field almost doubled. So in 1983-84, computer science degrees accounted for 2.4 percent of all bachelor’s degrees conferred to women. By 2011-12, that had shrunk to less than 1 percent.

This is an especially notable trend because it runs counter to what’s been happening in other scientific fields.

Why has the number of women earning computer science degrees tumbled?

So the decline in computer science is atypical. But why? Experts we checked with offered some informed speculation.

Universities haven’t expanded computer-science programs quickly enough to meet the surge in student interest, an imbalance in supply and demand that persists to this day, said Margaret O'Mara, a historian at the University of Washington and author of Cities of Knowledge: Cold War Science and the Search for the Next Silicon Valley.

"There are not enough seats in upper-level computer-science courses to meet demand," she said. "So introductory courses become weed-out courses that turn students off if they don’t already have a fierce passion for the discipline."

This ended up favoring men. The home-based personal computer arrived in the mid 1980s, and it was marketed "almost entirely to men and boys," NPR noted last year. And the popularization of the "hacker" persona reinforced it further. "Hackers were almost uniformly white, adolescent, middle-class males," said Nathan Ensmenger, associate professor of informatics at Indiana University.

This pattern continued into the workplace. Many companies had "a 'frat boy' atmosphere," said Ed Lazowska, the Bill & Melinda Gates chair in computer science and engineering at the University of Washington. "They simply weren't welcoming places for women. And stereotypes are hard to stamp out, even if and when behavior actually changes."

Ironically, it wasn’t always this way. In the 1940s and 1950s, computer work was seen as something akin to being a telephone operator -- a rote technical skill that women had traditionally handled. So the first electronic supercomputer -- ENIAC at the University of Pennsylvania -- had an entirely female programming staff, O’Mara said. Similarly, in the 1950s, IBM had "systems service girls," who were sent out to fix your computer if it got buggy.

"But as computing became big business, the startup culture, and its unstable life and all-consuming hours, ruled," O’Mara said. " Women got edged further and further out of the picture."

Clinton said, "You had more women getting computer-sciences degrees in the '80s by a factor of 2-plus than you do now."

The difference in raw numbers never quite hit the 2-to-1 ratio she cited, but it did get pretty close. She is correct that the share of computer science degrees earned by women peaked in the mid 1980s and has fallen since then.

Email interview with Margaret O'Mara, historian at the University of Washington and author of Cities of Knowledge: Cold War Science and the Search for the Next Silicon Valley, Feb. 26, 2015

Email interview with Ed Lazowska, the Bill & Melinda Gates chair in computer science and engineering at the University of Washington, Feb. 26, 2015