Chad Mayes
stated on January 17, 2017 in a speech.:
"Legislators themselves cannot afford to buy housing in California."

Construction worker Elabert Salazar works on a house frame for a new home in Chula Vista, Calif., in this Nov. 16, 2012, file photo.

Is housing in California so expensive that even state lawmakers are priced out?

"Legislators themselves cannot afford to buy housing in California," Mayes, who represents parts of San Bernardino and Riverside counties, said at a forum hosted by the Public Policy Institute of California on Jan. 17, 2017.

Assemblyman Chad Mayes makes his claim at about the 11:30 minute mark in this video.

The forum offered legislative leaders a chance to speak about their top priorities. Mayes said reducing the state’s housing costs and its high share of poverty are among his top goals.

There’s no doubt California is an expensive place to live. And its housing market has experienced a strong rebound following the Great Recession.

But is it fair to say California’s state lawmakers — who receive the highest base salary of any state legislators in the country at $104,000 — can’t afford a home in the Golden State?

It lists California’s median priced single-family home at $515,940, noting the minimum qualifying income to reasonably afford that home is $100,290.

For condos, the median price is $418,230 with a minimum qualifying income of $81,290. All figures are based on home sales data from the third quarter in 2016, the most recent period available. 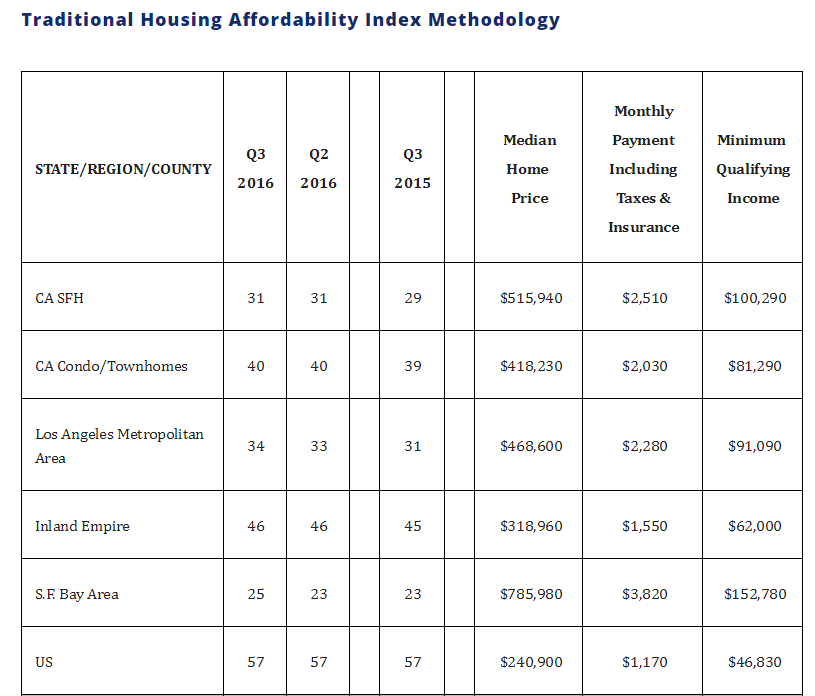 On the realtors index, the qualifying income figures assume homebuyers spend no more than one-third of their income on housing, make a 20 percent down payment, and pay the national average interest rate, plus principal, interest, property tax and homeowner’s insurance.

Based on their salaries, and the supplemental pay lawmakers receive, it’s clear California state lawmakers can afford the state’s median single-family home or condo, and less expensive homes. Notably, California’s state lawmakers receive up to $35,000 per year in per diem to cover their costs while working in Sacramento, including housing. Their flights to and from their districts are also paid by the state.

When we asked Mayes’ office for evidence to back up his claim, his spokesman Matt Mahon told us the assemblyman is correct if we consider the cost "to buy a home in a number of California cities."

That’s different from Mayes’ blanket statement that "Legislators themselves cannot afford to buy housing in California." But, for some context, we decided to examine the range of home costs in the state.

The realtors association index places a median priced single family home in the San Francisco Bay Area at $785,980 with a corresponding minimum qualifying income at $152,780. In San Diego, those figures are $589,260 and $114,540, respectively. Prices in other coastal cities, from Santa Cruz to Santa Barbara to Ventura, are also considerably higher than the median.

State lawmakers, assuming they earned close to base pay, were the sole income earners in their household and had no additional sources of income, would find fewer affordable homes in these markets.

"It just depends on where they come from. Maybe in the big cities they would struggle," said Anna Scherbina, an associate professor at the UC Davis Graduate School of Management, who studies investment management and behavioral finance.

"If Mayes wants to buy a home in Santa Barbara or San Mateo then, yes, he will have some problems. But if he's looking to buy in Bakersfield, the Central Valley, or South Sacramento, he's not going to have too much of a problem," added Jesus Hernandez, who lectures at the UC Davis sociology department and has written about housing. "Mayes is trying to make a point that housing prices are sky high again making it difficult for even middle class folks to buy. And he does have a valid concern." 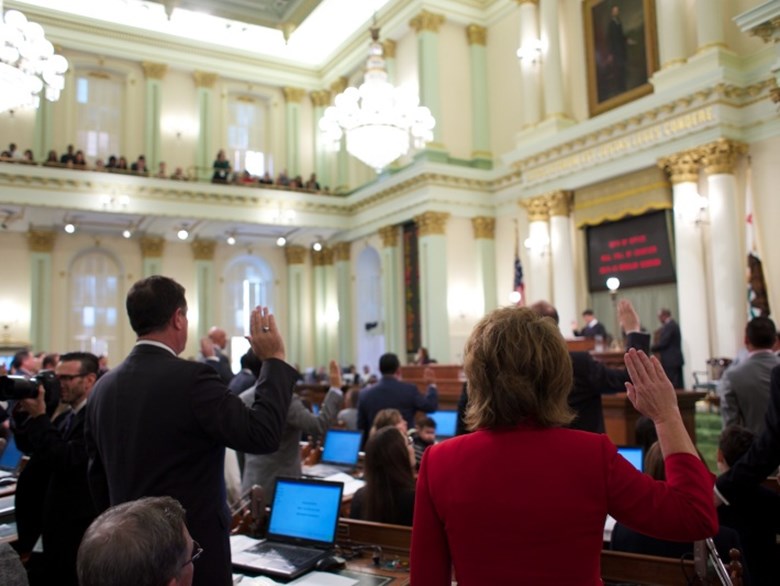 Prices away from the coast

State lawmaker salaries are on the high-end, not just for lawmakers across the country, but for anyone in California. The state’s median household income was $61,818 in 2015 dollars, according to the U.S. Census Bureau.

Through the third quarter of 2016, just 31 percent of homebuyers in California could afford to purchase the state’s median-priced single family home, according to the realtors’ index. It was the 14th consecutive quarter that the index has been below 40 percent.

In addition to their state salaries, many legislators collect income from the small businesses they own, from stocks and rental properties, according to a check of their statements of economic interests. Many also list household income generated by their spouses.

Mayes has a point when considering some of California’s priciest coastal cities.

In the San Francisco Bay Area, for example, it would take a minimum salary of $152,000 to afford a median priced single family home, well above the $104,000 base pay for state legislators.

But Mayes did not make this qualification. Instead, he declared legislators in general can’t afford California homes. Based on data from the California Association of Realtors Traditional Housing Affordability Index, that’s just not the case.

At $515,000, California’s median priced single family home is expensive. But the salary to reasonably afford that home is $100,290, less than a legislator’s base pay. Many, though not necessarily all, lawmakers have other sources of income including the income of a spouse, or from owning a small business, that would increase their purchasing power.

Mayes’ statement contains an element of truth, but ignores critical facts that would give a different impression.