Sen. Lindsey Graham, R-S.C., speaks about his resolution condemning the House impeachment inquiry during a news conference at the Capitol in Washington on Oct. 24, 2019. (AP/Applewhite)

The resolution rebuked the Democratic-led House for interviewing impeachment witnesses behind closed doors and not holding a formal vote to initiate the inquiry.

It also argued that Trump, who faces impeachment for urging Ukraine to investigate former Vice President Joe Biden, a potential challenger in the 2020 election, has not received "fundamental constitutional protections."

"The House of Representatives is abandoning more than a century’s worth of precedent and tradition in impeachment proceedings and denying President Trump basic fairness and due process accorded every American," Graham wrote in the resolution.

But Graham’s claim that Trump has been denied due process — a claim he has repeated on Twitter and in Congress — does not square with the law or the way impeachment works.

One of the cornerstones of American jurisprudence is due process – the right to confront your accuser, call witnesses on your behalf, and challenge the accusations against you.

None of this is occurring in the House.

We looked into the same "due process" claim when it showed up in a White House letter indicating that Trump would not be cooperating with the inquiry. At the time, constitutional scholars told us that complaint lacks legal footing.

The House impeaches, the Senate holds the trial

In his resolution, Graham wrote that due process for Trump would mean "the right to confront your accuser, call witnesses on your behalf, and challenge the accusations against you."

Graham spokesman Kevin Bishop pointed to a presentation Graham showed during a press conference listing rights Graham said President Bill Clinton had when he was impeached, such as the right to have counsel at hearings and the right to challenge evidence, among others. (The House Judiciary Committee did hear testimony from Clinton’s White House counsel, but there’s no constitutional provision requiring it to do so.) 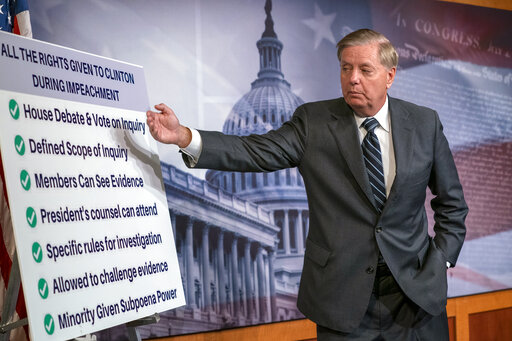 Sen. Lindsey Graham, R-S.C., speaks about his resolution during a news conference in Washington on Oct. 24, 2019. (AP/Applewhite)​

But when we checked out the White House’s letter, Vanderbilt University law professor Suzanna Sherry told us "there is nothing that requires Congress to give the president any of the opportunities" that Graham, like the White House attorney before him, described.

If such rights apply at all, they would be granted to Trump during the trial phase, which the Constitution says takes place in the Senate. The House’s job is to determine whether there’s enough evidence to show that the president committed an impeachable offense.

Sherry told us that "an impeachment investigation is analogous to a criminal investigation or inquiry by the police, prosecutor or grand jury" and that "the accused has none of the rights" that White House counsel Pat Cipollone listed in the White House’s letter and Graham listed in his resolution.

"In particular, neither the accused nor his or her lawyer are present at a grand jury hearing, nor is the accused permitted to present witnesses or other evidence or see a transcript," she said.

"It is only after charges have been filed and the case has reached the trial stage that criminal defendants have the right to cross-examine witnesses, call witnesses, have access to evidence, and have counsel present," said former federal prosecutor and Stanford Law professor David Sklansky, adding that the due process complaint is "not a good argument."

"The role of the House of Representatives in an impeachment proceeding is to investigate and charge, not to try," he said. "The trial comes later, in the Senate."

Even in the Senate, however, it’s not clear that impeachment proceedings require due process protections, because conviction results only in removal from office, experts said.

Writing for Reason, Ilya Somin, a law professor at George Mason University, said due process rights are protected in "situations where an individual stands to lose her ‘life, liberty, or property,’ none of which is at risk here."

"To suggest that due process requires that a president facing only loss of office get more rights at the accusatory stage than a criminal defendant facing loss of liberty or even life is not only constitutionally unsupportable, but ludicrous," said Frank O. Bowman III, professor of law at the University of Missouri and the author of a book on impeachment.

The Constitution lets the House set the rules

Graham’s resolution criticized House Speaker Nancy Pelosi’s handling of the impeachment inquiry and the fact that she has not held a formal vote to authorize the inquiry.

In the past, the full House has authorized impeachment inquiries, and then the House Judiciary Committee has taken the lead in conducting the investigations, holding hearings on proposed articles of impeachment, and voting on whether to approve them. The final vote on impeachment is by the full House before it moves to Senate for trial.

Pelosi has not held a vote to authorize an impeachment inquiry (a majority say they approve of an inquiry), but instead instructed three committees — Intelligence, Oversight and Foreign Affairs — to carry out an investigation that Judiciary will use to draft any articles of impeachment. While her process has been different, historians told us Pelosi does not need to hold a full House vote.

In the only Supreme Court case where due process issues were raised — a 1993 ruling on the Senate impeachment trial of Judge Walter Nixon — the court found that the Senate’s process was "nonjusticiable," which Bowman said means "a matter not to be resolved by the courts."

But a federal judge in Washington on Oct. 25 called the idea that a full House vote is required to initiate impeachment proceedings "fatally flawed." In a 75-page district court opinion, Chief Judge Beryl A. Howell wrote, "Even in cases of presidential impeachment, a House resolution has never, in fact, been required to begin an impeachment inquiry."

"All that matters for legitimacy for the House proceedings is to follow the rules of the House as they currently stand and the Constitution," said Michael Gerhardt, a professor of law at the University of North Carolina in Chapel-Hill.

At the end of the day, the Constitution gives the House the right to decide how to proceed.

In the resolution, Graham wrote that House Democrats leading the impeachment inquiry are "denying President Trump basic fairness and due process accorded every American."

Constitutional scholars said due process rights are not necessarily guaranteed to a president during an impeachment inquiry. If they were, they would be granted during the Senate trial, not the House’s evidence-gathering process.

CORRECTION: This fact-check has been updated to include the House Oversight Committee among the congressional committees leading the investigations as part of the House impeachment inquiry.

United States District Court for the District of Columbia, "Memorandum Opinion Granting the Application of the Committee on the Judiciary, U.S. House of Representatives," Oct. 25, 2019

House of Representatives, Report of the House Judiciary Committee on the Impeachment of President Bill Clinton, December 16, 1998

PolitiFact, "Trump lawyer claims lack of due process in House impeachment. 3 reasons the law doesn’t back him up," Oct. 10, 2019