Facebook posts
stated on September 2, 2019 in a Facebook post:
Says Rihanna hired "five planes that carried 90,000 liters of water to support the fire control" in the Amazon rainforest.

As wildfires continue to consume large swaths of the Amazon rainforest, some social media users are crediting celebrities with trying to help extinguish them.

In an Instagram post published Sept. 2, one user published a screenshot of a tweet that claims the singer Rihanna has hired "five planes that carried 90,000 liters of water to support the fire control" in the Amazon rainforest. Brazil’s National Institute for Space Research estimates there have been 90,000 fires throughout the region this year.

"We luv Rihanna," the Instagram user wrote about the artist. "(Pretty sure it’s a joke but we still luv her)"

We don’t know if it’s a joke, but we do know it’s not true. The post, which has racked up thousands of Instagram likes and numerous shares, was flagged as part of Facebook’s efforts to combat false news and misinformation on its News Feed. (Read more about our partnership with Facebook, which owns Instagram.) 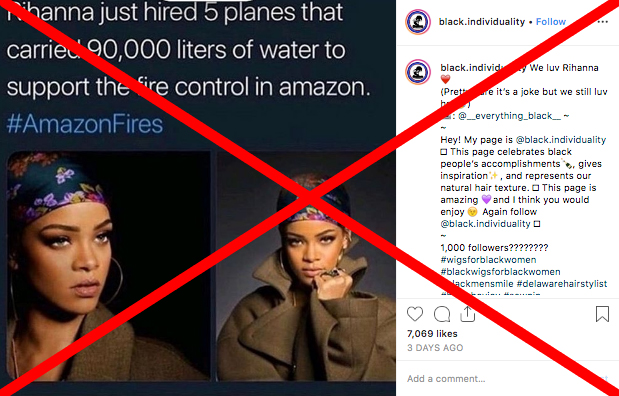 Viral image
stated on January 31, 2020 in a Facebook post
Says the coronavirus isn’t new because “Lysol has it listed as one of the viruses that it kills.”

A search for the original tweet pictured in the Instagram post turned up several examples of the same claim, although with different celebrities. Over the past week, tweeters have claimed that Selena Gomez, rapper Bhad Bhabie, Nicki Minaj and other public figures have also hired five planes to carry 90,000 liters of water to the Amazon.

An advanced Twitter search of Rihanna’s tweets revealed that the artist has never tweeted about the Amazon rainforest. She also hasn’t mentioned the fires on her Instagram in the past several weeks.

Finally, we couldn’t find any news stories mentioning Rihanna even speaking about the Amazon fires, much less hiring planes to carry water there. It’s reasonable to assume a celebrity as well-known as Rihanna would receive at least some press attention for such a move. Rihanna’s foundation, for example, has been involved with other humanitarian efforts, such as giving grants to nonprofits for disaster relief.

But when it comes to this rainforest claim, we couldn’t find any evidence to support the notion that she or any of the other celebrities mentioned on Twitter had hired aircraft to help put out the Amazon fires.

We do know, however, that the Brazilian military has used warplanes to dump water on the blazes.

Facebook posts
stated on February 15, 2020 an image:
High levels of sulfur dioxide in Wuhan “may be a sign of mass cremations of victims of the coronavirus."

Facebook posts
stated on February 25, 2020 a video:
Coronavirus patients are being "cremated alive" in China.

Facebook posts
stated on February 21, 2020 an image:
"There is a group going to homes and pretending to be officials from home affairs. They have documents with the letterhead Department of Home Affairs and claim to be confirming that everyone has a valid ID for the upcoming census. They are robbing homes."

Facebook posts
stated on February 20, 2020 an image:
“Bernie Sanders wants free health care for all and was asked how he would pay for it. His answer was raise taxes to 52% on anybody making over $29,000 per year.”

Michael Bloomberg
stated on February 20, 2020 a tweeted video:
Video shows Democratic presidential candidates speechless for 20 seconds when discussing whether any of them started a business.

Facebook posts
stated on February 12, 2020 a Facebook post:
A photo of Pete Buttigieg in a military uniform without visible patches shows that “he is a fraud.”

Hal Turner Radio Show
stated on February 1, 2020 an article:
Says the coronavirus is “a MILITARY BIO-WEAPON Developed by China's Army.”

NaturalNews.com
stated on February 3, 2020 an article:
Says "the coronavirus was engineered by scientists in a lab."