Facebook posts
stated on September 8, 2019 in a Facebook post:
Says aquatic life near Alaska, Canada and Australia have been found with cancer and mutations as a result of the Fukushima nuclear disaster.

A widely shared Facebook post is trying to connect the Japanese nuclear disaster to an increase in cancer among marine life near Alaska, Canada and Australia. The post, which was published Sept. 8, displays three photos of sharks and fish with apparent tumors or lesions on their skin.

"Sharks are being found with massive cancerous tumors on their bodies. Salmon caught off the coast of Alaska are riddled with cancer," the post reads. "Fukushima has been seeping radioactivity into our oceans daily since 2011, and the oceans are extremely sick because of it."

The post was flagged as part of Facebook’s efforts to combat false news and misinformation on its News Feed. (Read more about our partnership with Facebook.) And it’s been shared nearly 2,000 times, so we wanted to check it out.

The Fukushima nuclear disaster came after a tsunami hit the eastern coast of Japan in 2011, killing more than 18,000 people. The accident occurred at the Fukushima Daiichi Nuclear Power Plant between Tokyo and Sendai and resulted in the meltdown of three reactors. It was the worst nuclear accident since the 1986 Chernobyl disaster in Ukraine.

While sharks and fish are capable of getting cancerous tumors, the photos in the post are misleading. None have been directly linked to Fukushima, and there’s little evidence to suggest that fish far from Japan have been affected by the disaster.

We did reverse image searches for each of the photos included in the Facebook post. The first image, which shows a shark with what appear to be tumors around its mouth, dates back to at least 2013. That’s when a website called Live Science published it as part of a story about why sharks get cancer.

"It's unknown what caused the tumors in the great white or bronzer shark," Live Science wrote of the photo. "However, reports of cancerous tumors in marine animals, especially mammals, have steadily increased over the past 20 years, raising concerns that industrial pollutants or human activities may trigger the cancers."

The story — which was based on a 2013 study — doesn’t mention Fukushima specifically or nuclear disasters more broadly as having an effect. 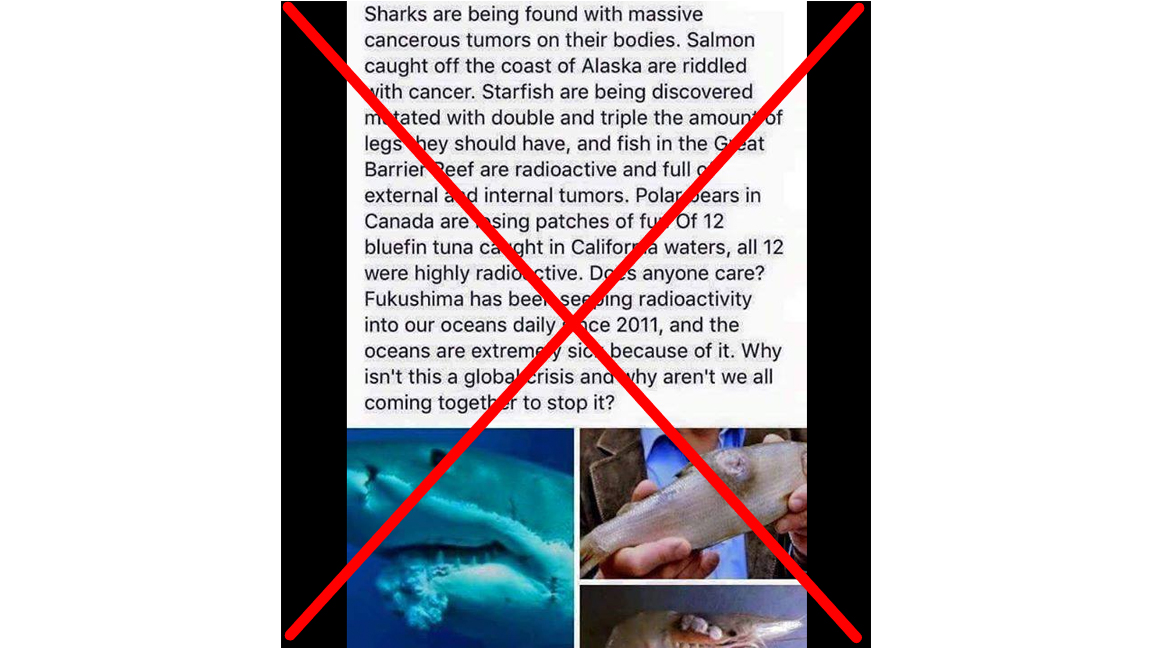 The second photo, which shows a fish with a lesion on its skin, is at least seven years old. We found it in a story published by the website ZME Science in November 2012, which covered how Canadian researchers had found contaminants near oil sands operations.

The third image included in the Facebook post is a little more ambiguous. A search for it using TinEye, a tool that searches the internet for images, surfaced a 2012 Al Jazeera story about the 2010 BP oil spill in the Gulf of Mexico. It reported that the image shows a shrimp with mutations as a result of the spill.

None of the stories mentioned nuclear radioactivity as having contributed to the lesions.

The Facebook post took three photos out of context. But does it have a larger point about the effect of Fukushima on fish?

Generally, no, but the answer is a little more complicated.

The post specifically mentions salmon off the coast of Alaska as being "riddled with cancer." But a public statement from the state’s Department of Environmental Conservation rebuts that, saying testing results have not indicated measurable levels of Fukushima-related radionuclides — radioactive atoms — in Alaskan seafood.

"(The Food and Drug Administration) has found no evidence that radionuclides of health concern from the Japanese nuclear power plant disaster are present in the U.S. food supply," the statement reads.

Some scientists have found salmon with trace amounts of cesium 134 — a radioactive element specifically associated with the Fukushima disaster — in Canadian waters. But the levels were 10,000 times lower than health safety guidelines.

As for the Great Barrier Reef, another area specifically mentioned in the post, the link between Fukushima and fish is just as weak. In a public statement published by the Australian Radiation Protection and Nuclear Safety Agency, officials said they hadn’t detected any substantial radioactivity off the coast.

"Ongoing monitoring programs are in place that continue to monitor for the Fukushima signature, but it is expected that by the time it reaches Australian waters, the radioactive material will have been diluted to such low levels that it will be undetectable," the statement reads. 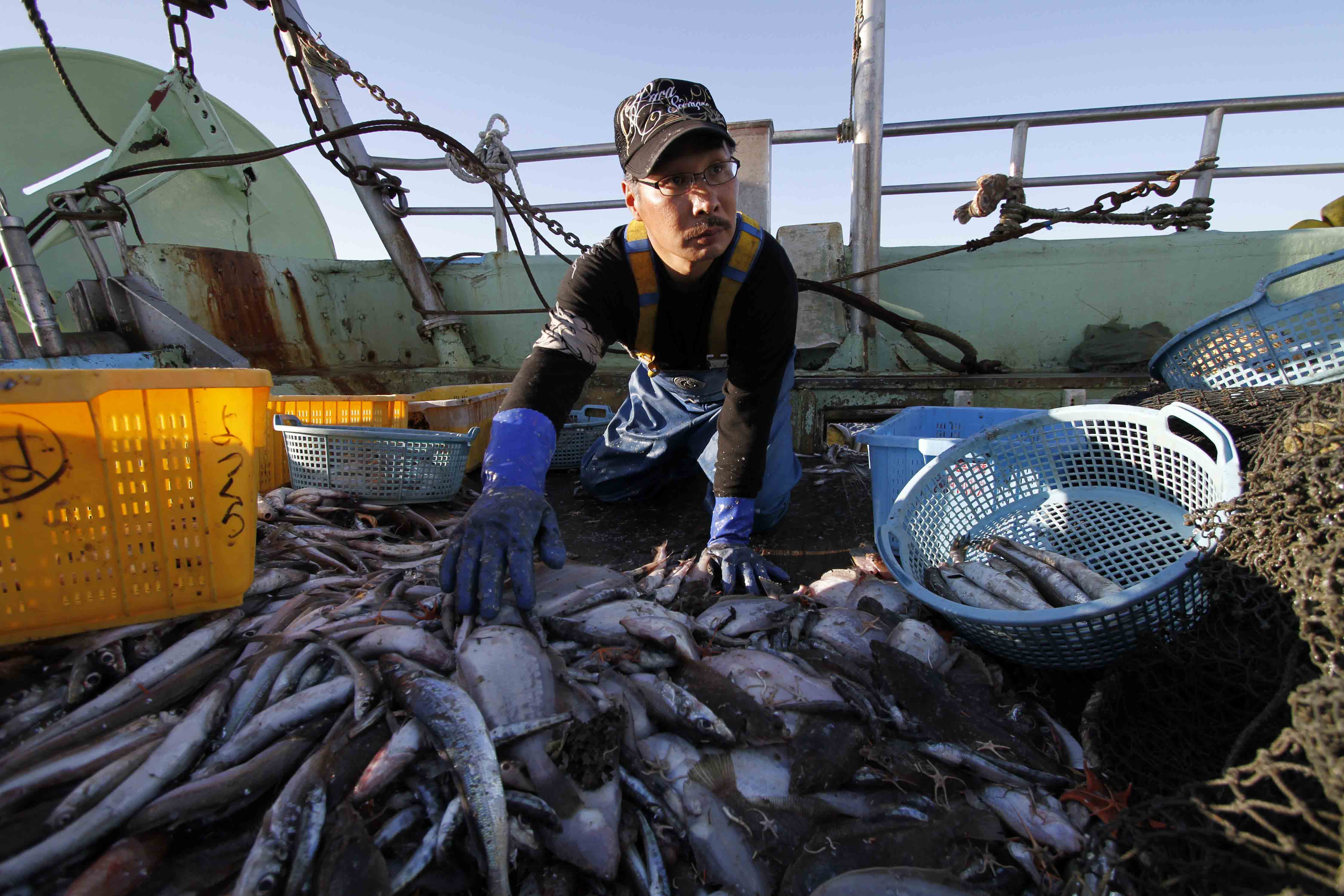 In this Aug. 26, 2013 photo, fisherman Fumio Suzuki sorts out fish he caught aboard his boat Ebisu Maru in the waters off Iwaki, about 40 kilometers (25 miles) south of the tsunami-crippled Fukushima Dai-ichi nuclear power plant, Japan. (AP)

Japan is a different story.

A 2012 study found elevated levels of cesium in fish directly off the coast of Fukushima, and the government banned the sale of certain species of sea life that surpassed 100 becquerels per kilogram. Those bans slowly tapered off until February of this year, when officials noticed a spike in cesium-tainted fish off the Fukushima coast. But since the disaster, the government has implemented a massive decontamination effort, which has preserved the safety of most of the country’s fish and agriculture.

None of that is to say radioactive contamination of sea life outside Japan is impossible. Scientists and reporters studying the long-term effects of Fukushima warn that radiation will continue to seep into the Pacific Ocean for years to come. But as of now, those effects are measurable mostly in the waters right off the coast of the disaster site — and even there, most fish are safe to eat.

A Facebook post claimed that several species of marine life near Alaska, Canada and Australia have been found with cancer, mutations and radiation as a result of the Fukushima nuclear disaster.

None of the photos included in the post have been linked to radiation from the disaster, or even to Japan in general. Studies show that sharks and other marine life are capable of getting cancerous tumors and lesions, albeit not exclusively because of radiation. And while scientists have found elevated levels of radioactive elements in fish off the coast of Fukushima, most sea life is safe to consume — and officials in the U.S. and Australia have not found similar radiation.

Proceedings of the National Academy of Sciences, "Fukushima-derived radionuclides in the ocean and biota off Japan," April 2, 2012

The Washington Post, "Eight years after Fukushima’s meltdown, the land is recovering, but public trust is not," Feb. 20, 2019