Facebook posts
stated on March 29, 2020 in an image:
Says the governors of Michigan, New York and Nevada “have issued orders banning the prescription of hydroxychloroquine to patients with COVID-19.”

New York Gov. Andrew Cuomo speaks during a news conference against a backdrop of medical supplies at the Jacob Javits Center that will house a temporary hospital in response to the COVID-19 outbreak on March 24, 2020, in New York. (AP)

Facebook pages and groups are promoting misleading information about several states’ decisions to restrict access to a malaria drug that could be used to treat COVID-19.

"For a drug deemed safe by doctors and has a history of safely treating malaria for the last 40-50 years," reads a caption on the post. "So now ask yourself...who is the enemy."

The photo collage also asserts that the governors are "threatening the licenses of doctors and pharmacist(s)." That’s similar to a claim made in a Facebook post published by Trending Politics, a conservative opinion website, on March 27.

"The Democrat Governor of Michigan along with other Democrat governors are THREATENING doctors who prescribe the promising drug Chloroquine to Coronavirus patients," reads text on an image of Whitmer.

The posts were flagged as part of Facebook’s efforts to combat false news and misinformation on its News Feed. (Read more about our partnership with Facebook.) Collectively, they’ve been shared thousands of times. 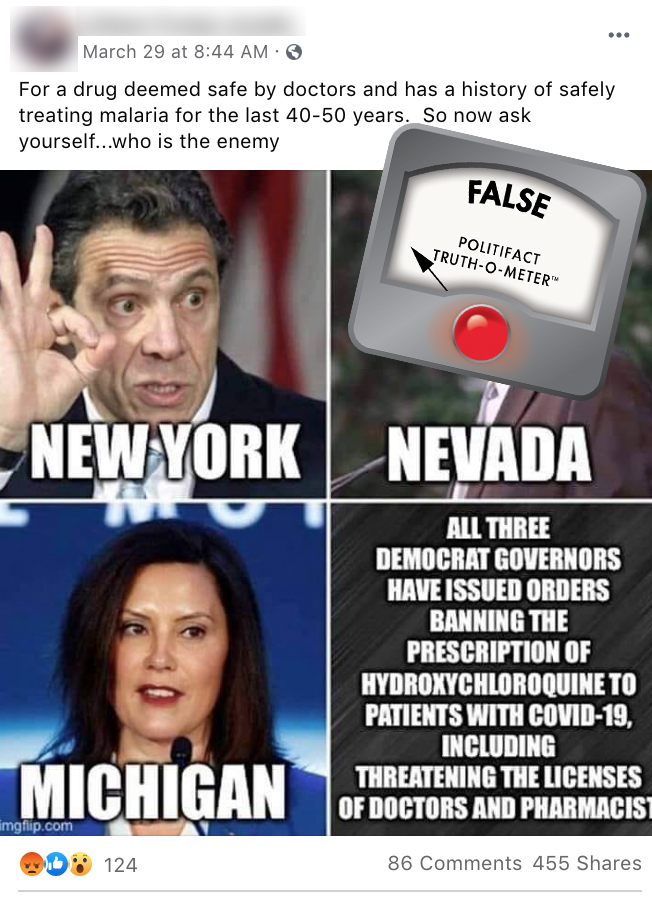 Since President Donald Trump said during a March 19 press briefing that chloroquine could potentially be used to treat COVID-19, several states have restricted access to the malaria drug to prevent stockpiling — including New York and Nevada. But neither of those orders bans the use of chloroquine outright, and Michigan has not taken formal action to restrict access to the drug.

New York and Nevada have limited access to chloroquine since Trump’s March 19 press briefing. But neither of the actions comprise an outright ban on the drug.

Take Nevada, for example. On March 24, Sisolak signed an emergency regulation that safeguards the supply of chloroquine and hydroxychloroquine, which is sold under the brand name Plaquenil and as a generic. The order prohibits doctors in outpatient settings from prescribing and dispensing the drugs for COVID-19 treatment. It also limits prescriptions to 30-day supplies.

"While the two drugs serve necessary medical purposes, there is no conclusive evidence at this time among COVID-19 experts or Nevada’s own medical health advisory team that the drugs provide treatment for COVID-19 patients," Sisolak said during a press conference. "The emergency regulation is aimed at preventing the hoarding of the drugs so those that actually need them can have access to them."

As several news outlets have reported, physicians around the country have started to prescribe themselves chloroquine in order to hoard it for their families. That hoarding has led to drug shortages in some parts of the country, affecting patients who take chloroquine regularly to treat conditions like lupus and arthritis.

Conservative organizations like Turning Point USA took Nevada’s order to mean Sisolak was banning any use of chloroquine for COVID-19 patients. But there is an exemption to the order.

A spokesman for Sisolak told KSNV-TV in Las Vegas that the regulation allows for a "chart order for an inpatient in an institutional setting," meaning that doctors in hospitals and emergency rooms can still prescribe chloroquine to treat patients diagnosed with COVID-19.

That’s similar to what the government has done in New York.

On March 23, Cuomo signed an executive order restricting the prescription of chloroquine "except when written as prescribed for an FDA-approved indication; or as part of a state approved clinical trial related to COVID-19 for a patient who has tested positive for COVID-19."

The state has acquired more than 800,000 doses of chloroquine and hydroxychloroquine for clinical trials. And while the Food and Drug Administration has said there are no approved drugs to treat or prevent the coronavirus, the agency is investigating whether chloroquine "can be used to treat patients with mild-to-moderate COVID-19 to potentially reduce the duration of symptoms." On March 28, the FDA signed an emergency authorization for the use of chloroquine to treat patients hospitalized with COVID-19.

The day before that action, Cuomo amended his previous restrictions on the drug.

The new rules allow health care providers to prescribe the drug for "patients in inpatient settings and acute settings; for residents in a subacute part of a skilled nursing facility; or as part of an study approved by an Institutional Review Board." The change means that, similar to Nevada, doctors in New York can now prescribe chloroquine to COVID-19 patients in hospitals and emergency rooms, but not in outpatient settings.

Bottom line: Neither Nevada nor New York currently bans the use of chloroquine to treat coronavirus patients.

Michigan has taken no formal action to restrict access to chloroquine. Instead, it has asked prescribers to not stockpile the drug for friends and family.

On March 24, the state’s Department of Licensing and Regulatory Affairs sent a letter to "licensed prescribers and dispensers" about chloroquine and hydroxychloroquine. It said that the department had received "multiple allegations of Michigan physicians inappropriately prescribing hydroxychloroquine or chloroquine to themselves, family, friends, and/or coworkers without a legitimate medical purpose."

"Prescribing hydroxychloroquine or chloroquine without further proof of efficacy for treating COVID-19 or with the intent to stockpile the drug may create a shortage for patients with lupus, rheumatoid arthritis, or other ailments for which chloroquine and hydroxychloroquine are proven treatments," the letter reads. "Reports of this conduct will be evaluated and may be further investigated for administrative action."

The letter did not outline any new regulatory action related to chloroquine. In a follow-up statement published March 27, the department said the purpose of the correspondence was "to remind both prescribers and dispensers of their continued obligation to adhere to the standards of practice."

RELATED: A 100% COVID-19 cure? No, chloroquine effectiveness only anecdotal

On March 31, however, the state shifted course. It requested chloroquine and hydroxychloroquine from the Strategic National Stockpile based on the FDA emergency authorization for using the drug to treat severe cases of COVID-19. The Detroit News reported that several hospitals in the metro area are using chloroquine to treat hospitalized patients.

In an op-ed, Michigan Senate Majority Leader Mike Shirkey explained why the government included the "administrative action" wording in its original letter.

"We needed something to prevent chloroquine from becoming the next toilet paper," he told the Detroit News. "I quickly requested of (Whitmer’s) staff that they put something out, and somehow in the translation it was prohibiting use of these drugs — and that wasn't the intent."

A Facebook post claims the governors of Michigan, Nevada and New York have ordered banning the use of chloroquine for COVID-19 patients.

Nevada and New York have restricted access to the malaria drug in an effort to limit stockpiling. Each state has exemptions for patients hospitalized with the coronavirus. Michigan has taken no additional regulatory action to restrict access to chloroquine; instead, it has asked prescribers to avoid giving the drug to potential stockpilers.

Governor of New York, "No. 202.10: Continuing Temporary Suspension and Modification of Laws Relating to the Disaster Emergency," March 23, 2020

Governor of New York, "No. 202.11: Continuing Temporary Suspension and Modification of Laws Relating to the Disaster Emergency," March 27, 2020

Letter from the Michigan Department of Licensing and Regulatory Affairs, March 24, 2020