As Washington scrambled to prop up businesses stung by the impact of COVID-19, President Donald Trump reportedly threatened to reject a version of the recently-signed stimulus package that contained funding for the U.S. Postal Service.

According to the Washington Post, Trump would have blocked the CARES Act had it included a $13 billion grant for the Postal Service instead of the $10 billion loan from the final version.

Trump has long been critical of the Postal Service, saying as recently as April 7 that the service "has lost billions of dollars every year" and has an unfair relationship with Amazon.

But a widespread Facebook post says Trump’s frustrations are misguided, and that members of his own party are actually to blame for the Postal Service’s financial problems.

"The Postal Service is not losing money because of Amazon," the post says. "It’s losing money because in 2006, the Republican-led Congress passed a law forcing it to prepay its pensions for 75 years, which no other corporation does. This was meant to bankrupt it so it’s business could be privatized for profit. Without this law, the Postal Service would be turning a profit."

The post has been around more than a year, but it was picked up April 13 by the AFL-CIO, a federation of labor unions. It was flagged as part of Facebook’s efforts to combat potential false news and misinformation on its News Feed. (Read more about our partnership with Facebook.)

In this case, the post is accurate in some ways, and misleading in others. Kalina Newman, a spokesperson for the AFL-CIO, cited a 2010 Postal Service report and a CNBC article.

A lame-duck Republican Congress did pass a financially burdensome law in 2006 requiring the Postal Service to pre-fund health benefits for future retirees, and the service’s deal with Amazon hasn’t proven to be the money drain that Trump has said it is. But the service has more financial problems than just the requirements of the 2006 law.

We won’t weigh in on whether the law was "meant to bankrupt" the Postal Service.

Background on the Postal Service

The Postal Service is a unique agency. It's meant to be self-sustaining, paying for itself from the money it makes off postage and other daily mail services.

But it also has to follow rules set by Congress that result in higher costs — notably, it’s expected to deliver mail daily and keep postage rates flat for all parts of the country.

The rise of the internet tanked the volume of first-class mail in circulation, which peaked in 2001 and has dropped every year since. Costs, on the other hand, haven’t gone down.

The coronavirus has sent those problems spiraling out of control. Mail volumes have declined and sales are "plummeting," Postmaster General Megan Brennan said in a recent statement. 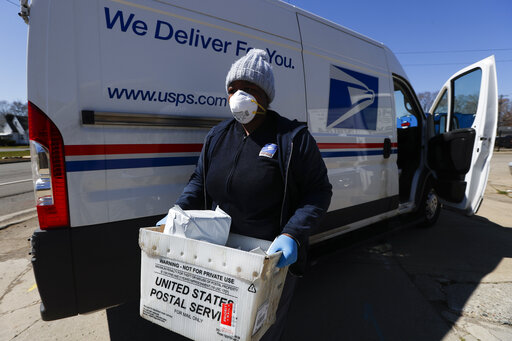 A U.S. Postal worker makes a delivery with gloves and a mask in Warren, Michigan, on April 2, 2020. (AP/Sancya)

Amazon has been a bright spot

While the Postal Service has seen declines in first-class and marketing mail, growth in shipping and packaging — which includes Amazon — has been a bright spot.

Amazon and other bulk suppliers do get a special rate, as the Postal Service provides discounts to companies for which it does last-mile delivery. But it’s at least a break-even venture.

That’s because the 2006 Postal Accountability and Enhancement Act — the law responsible for the retiree health benefit requirement — made it illegal for the Postal Service to price parcel delivery below its cost. One study said the Postal Service could be charging more, however.

The 2006 law also established a fund for Postal Service retiree health benefits. It required prepayment of those benefits according to a 50-year schedule, starting with 10 years of statutorily prescribed payments of roughly $5 billion from 2007 to 2017.

Previously, the service funded the benefits on a pay-as-you-go basis.

The act was passed by a Republican-led Congress. But it dealt with retiree health benefits, not pensions, said David Partenheimer, a spokesman for the Postal Service.

There’s also some confusion over whether the Postal Service was forced to prepay benefits "for 75 years," as the Facebook post said. The language of the law doesn’t mention 75 years, and Partenheimer said the Postal Service has not used that timeframe to describe the requirement.

In 2012, the Government Accountability Office said the act "did not require USPS to prefund 75 years of retiree health benefits over a 10-year period" but that the "payments would be projected to fund the liability over a period in excess of 50 years, from 2007 through 2056 and beyond."

Regardless, Partenheimer told us that "the pre-funding requirement included in the 2006 law is a major reason for our financial situation, along with an outdated business model."

The Postal Service began defaulting on its payments in 2012. A fact sheet said that without defaulting, the service "would not have been able to pay our employees, our suppliers, or deliver the mail" — a point the postmaster general reiterated in 2019 congressional testimony.

James O’Rourke, a teaching professor of management at the University of Notre Dame, said the Facebook post is "more-or-less correct" about the 2006 law.

"This advance funding requirement places a burden of about $6.6 billion on the postal service that would not exist if they followed a pay-as-you-go approach," O’Rourke said. "This burden has quite nearly bankrupted the USPS over a 15-year period."

But Jim Campbell, a private attorney and an expert on postal service laws, said the 2006 law also freed the Postal Service of a prior obligation to cover pension costs for military service its employees completed before joining the Postal Service.

A 2009 report from the nonpartisan Congressional Research Service said that shift relieved the Postal Service of a $27 billion cost. Campbell said that when the 2006 law was enacted, it was expected that relief from prior costs would "more or less completely offset the new obligation."

Would the Postal Service be turning a profit otherwise?

The Facebook post suggests that if the Postal Service could get rid of the 2006 law, everything else would be fine. But the reality is more bleak — especially now.

"The problem with the Postal Service is just much more fundamental than this," Campbell said.

It does appear that the law’s elimination would have brought some relief. The progressive Institute for Policy Studies wrote that "if the costs of this retiree health care mandate were removed from the USPS financial statements," the Postal Service would’ve reported operating profits from 2013 through 2018. That’s accurate, according to a chart from the Trump administration’s 2018 report on the Postal Service.

In congressional testimony last year, Postal Service board member David Williams said the pre-funding requirement has been "devastating" not only because it limited other spending, but also because it "wiped out our entire ability to make capital investments" to modernize.

Still, as we noted in 2011, the Postal Service’s problems are greater than the retirement rules.

The service’s own fact sheet says a House bill to scrap the pre-funding requirement "will not reduce our underlying liability for retiree health benefits, nor improve our cash flow or long-term financial position." COVID-19 has worsened that position further in recent weeks.

"The USPS is forecast to lose tens of billions of dollars over the next decade," the Trump administration’s 2018 report said. "Standalone proposals, such as forgiving the prefunding of post-employment benefits or renegotiating labor contracts, will be insufficient."

"If left unattended, closure of the U.S. Postal Service in the years just ahead remains a possibility," O’Rourke added.

The Postal Service isn’t losing money from its deal with Amazon. But the 2006 law requiring the pre-funding of health benefits for future retirees — not pensions — has put a financial strain on the Postal Service and hurt its ability to turn a profit in some recent years.

However, the Postal Service has more financial problems than just the requirements of the law.

Institute for Policy Studies, "How Congress Manufactured a Postal Crisis — And How to Fix it," July 25, 2019

PolitiFact, "No, the Postal Service isn't losing a fortune on Amazon," April 2, 2018

PolitiFact, "The facts behind Trump’s jabs at Amazon on taxes, USPS and lost retail jobs," March 29, 2018

Email interview with James O’Rourke, teaching professor of management at the University of Notre Dame, April 13, 2020

Phone interview with Jim Campbell, an attorney and expert on the U.S. Postal Service, April 14, 2020