Bloggers
stated on August 5, 2020 in an article:
“Israel dropped a tactical nuclear weapon on the port of Beirut.”

A drone picture shows the scene of an explosion that hit the seaport of Beirut, Lebanon, on Aug. 5, 2020. (AP)

More than 100 people were killed and thousands injured in a large explosion at the port of Beirut on Aug. 4. Lebanese officials have attributed the tragedy to the detonation of more than 2,700 tons of a chemical commonly used in fertilizer.

But some have an alternative explanation for the explosion, which could be felt up to 150 miles away.

"Israel Hits Beirut with Nuclear Missile, Trump and Lebanese Govt. Confirm," reads the headline on an Aug. 5 article from Veterans Today, a website with a history of publishing anti-Semitic conspiracy theories and Russian propaganda.

The article itself has not been shared much on social media, according to CrowdTangle, a social media insights tool owned by Facebook. But screenshots of the headline, images embedded in the story and similar claims have been shared widely across social media platforms. 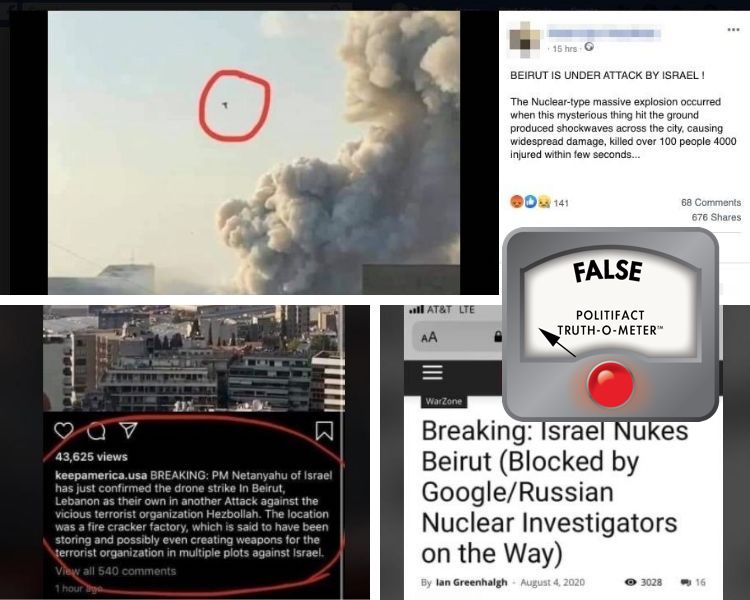 Some of the posts were flagged as part of Facebook’s efforts to combat false news and misinformation on its News Feed. (Read more about our partnership with Facebook.)

Lebanese officials are still investigating what sparked the fire that caused the explosion, which severely damaged buildings throughout the capital and covered the city in debris. But is there any evidence that Israel was involved?

What we know about the explosion

While it’s still unclear how exactly the explosion unfolded, available evidence points to a combination of fireworks and ammonium nitrate.

Lebanese authorities have said the blast occurred at a warehouse along the Beirut waterfront. The explosion is thought to have been caused by the ignition of ammonium nitrate that had been stored at the site for six years, according to Prime Minister Hassan Diab.

Ammonium nitrate is an explosive compound that’s commonly used in fertilizer and bombs. It was used in the 1995 Oklahoma City bombing, which left 168 people dead.

Officials are still investigating what started the fire at the warehouse. However, the fire appears to have spread with the help of fireworks also stored at the port.

Eyewitness video from Beirut shows what looks like fireworks igniting at the site of the fire at the port. The same footage does not show an incoming missile before the explosion.

A clearer view of the explosion also does not show any aircraft or missiles above the city.

A more clear view of the explosion. #beirut pic.twitter.com/74NgZWvRL0

The explosion in the videos looks like a mushroom cloud. But contrary to the Veterans Today article, there is no evidence that the explosion was caused by a nuclear weapon.

Atomic explosions create a blinding light, searing heat and nuclear fallout — none of which have been detected in Beirut. Meanwhile, reddish smoke, a telltale sign of ignited ammonium, can be seen in several bystander videos. The Associated Press reported the blast appeared to create a "condensation cloud, often common in massive explosions in humid conditions that can follow the shock waves of an explosion."

Other fact-checkers have debunked claims that the blast was caused by a nuclear bomb.

So the explosion in Beirut was not caused by a nuclear weapon. But what about the alleged involvement of Israel?

Israel is still technically at war with Hezbollah, a Lebanese political party that has been designated as a terrorist group by several countries — including the U.S. But Israeli intelligence officials have denied involvement in the Beirut explosion to several news outlets. In fact, Israel has offered humanitarian aid to Lebanon through the United Nations.

"On behalf of the government of Israel, I send my condolences to the people of Lebanon," tweeted the office of Israel Prime Minister Benjamin Netanyahu on Aug. 5. "Yesterday Lebanon suffered a major catastrophe. We are ready to offer humanitarian assistance, as human being to human beings."

The Lebanese government, which has accused Israel of provoking a recent escalation along the border, has not blamed its neighbor for the blast.

Meanwhile, Trump said during an Aug. 4 press briefing that the Beirut explosion "looks like a terrible attack." When a reporter questioned his use of the word "attack," the president doubled down.

"Well, it would seem like it, based on the explosion," Trump said. "I've met with some of our great generals, and they just seem to feel that it was. This was not some kind of a manufacturing explosion-type of event."

In its article, Veterans Today cites "a general in the Lebanese Army," someone else who writes for the website (and another site linked to pro-Russian disinformation), and an image of what appears to be a bird near the fire at the port of Beirut.

We reached out to the author of the Veterans Today article, but he did not comment.

Veterans Today claimed Israel dropped a nuclear weapon on the port of Beirut on Aug. 4.

Lebanese officials believe a combination of fireworks and ammonium nitrate caused the explosion in Beirut, a hypothesis that experts and eyewitness videos back up. The characteristics of a nuclear blast have not been detected in the city. And Israel has denied any involvement in the explosion.

CNN, "US defense officials contradict Trump: No indication yet of attack in Beirut," Aug. 5, 2020

NewsMeter.in, "Fact Check: Is the massive blast in Beirut a nuclear explosion?" Aug. 5, 2020

The New York Times, "As Death Toll Rises After Blast, a Search for Answers and Survivors: Live Updates," Aug. 5, 2020

The Washington Post, "What the videos of the Beirut blast tell us about the explosion," Aug. 5, 2020