Rush Limbaugh
stated on August 21, 2020 in a radio segment:
Says Joe Biden’s Democratic National Convention speech “had to be taped in segments, and the segments had to be edited together.”

In the days since, radio host Rush Limbaugh and other conservative media personalities have falsely claimed that Biden’s speech was pre-taped and edited to remove any mess-ups.

"This is the prevailing theory," Limbaugh added, claiming that he knew some "professional video people" who were studying the footage for evidence that it had been recorded in advance.

Similar claims have spread widely on Twitter and Facebook. The Facebook posts were flagged as part of Facebook’s efforts to combat false news and misinformation on its News Feed. (Read more about our partnership with Facebook.)

The claims are inaccurate. Biden’s speech was carried live by several cable and broadcast TV channels, streamed live by multiple news organizations, and attended live by dozens of people.

"There were roughly three-dozen reporters, a skeleton camera crew, a handful of Secret Service agents and a smattering of campaign staff," ABC News reporter John Verhovek wrote in a report describing what the experience was like for the reporters who were in the room.

Verhovek described receiving two negative COVID-19 tests and going through a "security sweep, temperature check and 45-minute wait" before entering the "cavernous room" with "a massive camera set up pointed directly at a wooden podium." 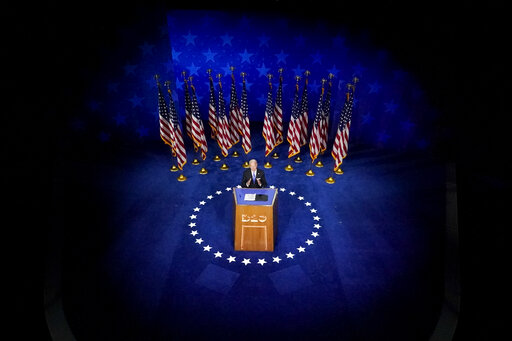 Joe Biden is shown from above as he speaks during the Democratic National Convention on Aug. 20, 2020, at the Chase Center in Wilmington, Del. (AP)

Some supporters of the Democratic presidential nominee watched the speech from their cars as it was displayed on a screen in a nearby parking lot.

Verhovek tweeted out photos and lines from Biden’s speech as he spoke, as well as a video of Biden and his running mate, Sen. Kamala Harris, interacting with supporters afterward through video feeds.

Cardillo shared three photos of Biden. Two were taken during Biden’s speech. The third was snapped later, while Biden and Harris were outside for the fireworks display.

But the photos Cardillo plucked out were cherry-picked and misleading. The same argument — and photos — formed the basis of similarly inaccurate claims on Facebook.

Video footage of Biden outside with Harris for the fireworks shows him wearing the very same pin that Cardillo claimed had disappeared from his suit. And the watch, which was clearly visible when Biden and Harris joined arms outside and raised them, was likely hidden beneath Biden’s sleeve for most of the speech, when his arms weren’t outstretched in the same way.

At one point during the speech, the watch on Biden’s wrist could briefly be seen glimmering under his sleeve. It was also visible for a moment after the speech as Biden, Harris and their spouses waved to supporters shown on a video wall behind the podium.

Between the speech, the interaction with supporters on screen, and the walk outside for the display of fireworks, Biden’s outfit never changed. (He did put on a mask before going outside.)

Limbaugh did not respond to a request for comment.

Limbaugh said Biden’s convention speech "had to be taped in segments, and the segments had to be edited together."

The nearly 25-minute speech was continuous. It was carried live on TV stations, streamed live online and delivered live for a room of reporters, camera crews, campaign staffers and Secret Service agents in Wilmington. Multiple reporters shared photos from inside the venue.