Bloggers
stated on December 6, 2020 in an article on GreenMedInfo.com:
"The FDA knows that rushed-to-market COVID-19 vaccines may cause a wide range of life-threatening side effects, including death."

A nurse administers the Pfizer-BioNTech COVID-19 vaccine at Guy's Hospital in London on Dec. 8, 2020. (AP)

An alternative health website that has published articles claiming vaccines cause autism is now setting its sights on the development of the COVID-19 vaccine.

In a Dec. 6 article, GreenMedInfo wrote that a document from the Food and Drug Administration revealed the government was worried about a slew of potential side effects from coronavirus vaccines. Among them: death.

"Public discussion and documents reveal that the FDA knows that rushed-to-market COVID-19 vaccines may cause a wide range of life-threatening side effects, including death," the article says below a large advertisement for an alternative health book.

The article was flagged as part of Facebook’s efforts to combat false news and misinformation on its News Feed. (Read more about our partnership with Facebook.) It’s been shared thousands of times by anti-vaccine Facebook pages and groups, according to CrowdTangle, a social media insights tool.

As U.S. coronavirus cases near 300,000, public health agencies are developing a strategy to distribute vaccines to millions of Americans in 2021. The first doses could be only days away, so we wanted to take a closer look at the claim that they could cause serious harm.

The article is misleading. 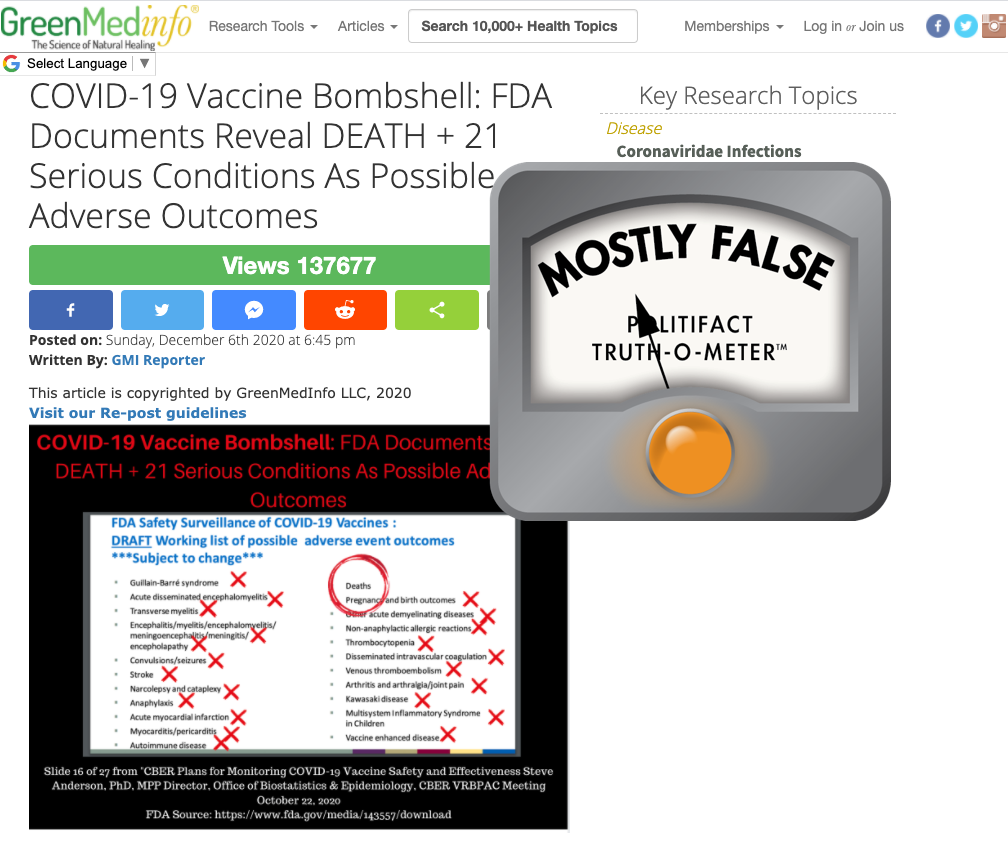 While the FDA is monitoring for potential adverse side effects, it has not found that any of the coronavirus vaccines seeking approval cause death. And just because COVID-19 vaccines were developed in record time doesn’t mean they’re unsafe.

GreenMedInfo cited an Oct. 22 presentation given during a meeting of the FDA’s Vaccines and Related Biological Products Advisory Committee. A slide in the presentation shows a "working list of possible adverse event outcomes" from coronavirus vaccines. Among them are chronic conditions like autoimmune disease and arthritis, as well as stroke and death.

But that doesn’t mean the FDA has reason to believe the coronavirus vaccines awaiting emergency-use authorization could cause death.

"As indicated on the slide, this is a description of the possible, not known, adverse event outcomes that the FDA will be monitoring for as the vaccine is deployed," a spokesperson told PolitiFact. "As described in slides, the FDA plans on monitoring 10-20 outcomes of interest."

While vaccines often take 10 to 15 years to develop, several potential COVID-19 vaccines were developed in a matter of months. There are several reasons for that, including the fact that scientists had previously worked on vaccines for similar coronaviruses and funding agencies poured billions of dollars into COVID-19 vaccine research.

Vaccines that are granted an emergency-use authorization still go through a rigorous review process, including all phases of clinical trials.

"Clinical trials are evaluating investigational COVID-19 vaccines in tens of thousands of study participants to generate the scientific data and other information needed by FDA to determine safety and effectiveness," the FDA says on its website. "These clinical trials are being conducted according to the rigorous standards set forth by the FDA."

We reached out to GreenMedInfo for a comment. Founder Sayer Ji said his website’s intention was "to counterbalance the highly biased promotion of vaccines as ‘safe and effective’ a priori."

Ji also cited an FDA briefing document on the vaccine developed by Pfizer and its partner, BioNTech. The United Kingdom on Dec. 8 became the first country to start distributing the vaccine, and Canada approved it the next day.

In the document, the FDA reported that six of 43,448 participants died during clinical trials of the vaccine held from April to November. Two had been given the vaccine, and four had received a placebo.

Both participants who received the vaccine and died were older than 55; one died from cardiac arrest, the other from arteriosclerosis. The vaccine was not listed among the causes of their deaths, which the FDA said were characteristic of their age groups.

Although the agency did note some minor side effects associated with the vaccine, including fatigue and headache, it said there were "no specific safety concerns identified that would preclude issuance" of emergency use authorization.

RELATED: Many Americans say they don’t want a vaccine. Should we be worried?

The FDA’s assessment supports Pfizer’s Nov. 18 announcement that its vaccine was safe and 95% effective at preventing the coronavirus. The agency will meet Dec. 10 to discuss whether to approve the emergency-use authorization, after which it will be assessed by the Centers for Disease Control and Prevention’s Advisory Committee on Immunization Practices and continue to be studied in clinical trials.

"The FDA would only issue an EUA if the vaccine has demonstrated clear and compelling efficacy in a large well-designed phase 3 clinical trial," the FDA told PolitiFact. "If an EUA is issued, the process will not be rushed, and no shortcuts will be taken around having the relevant phase 3 efficacy results."

GreenMedInfo was created in 2008 and has published several articles that falsely claim there’s a link between vaccines and autism. In 2018, Pinterest banned the site for violating its policies against anti-vaccine misinformation.

The website’s statement contains an element of truth but ignores critical facts that would give a different impression. We rate it Mostly False.

The Conversation, "What are emergency use authorizations, and do they guarantee that a vaccine or drug is safe?" Dec. 3, 2020

Email from a Food and Drug Administration spokesperson, Dec. 8, 2020

Food and Drug Administration, "Emergency Use Authorization of Medical Products and Related Authorities"

Food and Drug Administration, "Emergency Use Authorization for Vaccines Explained"

The History of Vaccines, "Vaccine Development, Testing, and Regulation"

PolitiFact, "COVID-19 vaccine update: What to know about Pfizer and Moderna’s announcements," Nov. 16, 2020

The Washington Post, "Britain launches the West’s first mass coronavirus vaccination — with a Maggie and a William Shakespeare first in line," Dec. 8, 2020