Facebook posts
stated on December 15, 2020 in text posts and screenshots:
“One of the first nurses to receive the vaccine in AL is now dead.”

As COVID-19 cases and deaths surge across the country, some Facebook users say frontline health care workers are in trouble. But not because of the virus.

A Dec. 15 text post said "one of the first nurses to receive the vaccine in AL is now dead."  Similar posts said a 42-year-old nurse who got the vaccine died at least 8 hours later.

"Not an internet rumor, my FB friend’s friend’s aunt," one of the posts says. "If you want to play Russian roulette with your life for a flu with a 99.997% survival rate, that’s your choice. Just don’t force it on others or shame those who don’t." 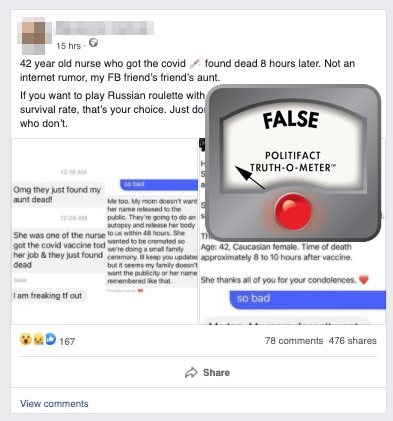 On Dec. 11, the Food and Drug Administration approved a coronavirus vaccine from Pfizer and BioNTech for emergency use. The first shots were given to frontline health care workers on Dec. 14.

Contrary to what the Facebook posts say, Pfizer’s vaccine has not been shown to cause death. Other fact-checkers have debunked rumors of nurses dying after taking the vaccine.

We reached out to the users who published the Facebook posts for their evidence. They didn’t provide any.

Viral image
stated on January 6, 2023 in a Facebook post
Coronavirus is a Latin word for “heart attack virus.”

Two health care workers in Alaska developed allergic reactions soon after receiving the vaccine, and were treated at the hospital where they worked, the New York Times reported. But we could find no evidence that the Pfizer vaccine has been linked to deaths anywhere since it was first distributed to health care workers.

On Dec. 16, the Alabama Department of Public Health published a statement on Facebook debunking a rumor that claimed a 42-year-old nurse in Alabama died "8-10 hours after getting the vaccine." The post’s source: anonymous family members.

The state health agency "has reached out to all hospitals in the state which administered the COVID-19 vaccine and confirmed there have been no deaths of vaccine recipients," the statement says. "The posts are untrue."

The FDA has not found any reason to believe that the Pfizer vaccine could cause death.

In a briefing document published prior to the Pfizer vaccine’s emergency approval, the agency said it had assessed the vaccine and found "no specific safety concerns identified that would preclude issuance" of an emergency-use authorization. The vaccine was not found to cause death in any of the 43,448 participants in clinical trials ranging from April to December.

RELATED: Why you shouldn’t worry about getting Bell’s Palsy from the Pfizer COVID-19 vaccine

The FDA’s emergency-use authorization stipulates that Pfizer must report COVID-19 cases that result in death and "serious adverse events" to the Vaccine Adverse Event Reporting System, which is co-managed by the FDA and the Centers for Disease Control and Prevention.

"I can confirm that as of 4 p.m. ET today that VAERS has received no reports of death after COVID-19 vaccines," CDC spokesperson Kristen Nordlund said in a Dec. 16 email.

Email from Kristen Nordlund, spokesperson for the Centers for Disease Control and Prevention, Dec. 16, 2020

Statement from the Alabama Department of Public Health, Dec. 16, 2020