The Centers for Disease Control and Prevention headquarters in Atlanta on March 6, 2020. (AP/ Harris)

As the U.S. continues to distribute the first COVID-19 vaccines, a viral tweet shared what it said were "COVID-19 survival rates" from the Centers for Disease Control and Prevention to downplay the severity of the virus and the need for vaccinations.

Screenshots of the tweet were also shared on Facebook and Instagram, where they were flagged as part of Facebook’s efforts to combat false news and misinformation on its News Feed. (Read more about our partnership with Facebook.) 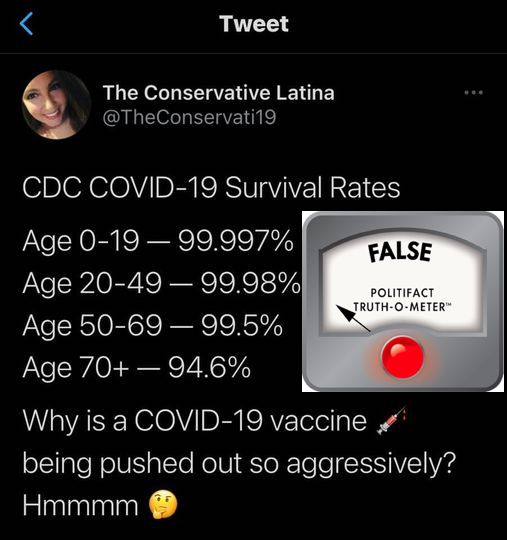 A screenshot of a viral tweet shared to Facebook that wrongly claimed to show the CDC's COVID-19 survival rates.

The age-specific "survival rates" listed in the post did not come from the CDC, however. CDC spokesperson Jasmine Reed told PolitiFact that the agency has not released any age-specific COVID-19 survival rates, nor does it have mortality rates available.

"Survival analysis is highly complex," Reed said. "CDC does not have the data to calculate survivability for COVID-19. Unclear as to where social media users are getting this information."

"We don’t have that data, so we don’t know," added Cindy Prins, an epidemiologist at the University of Florida. "And neither would the person who posted (the tweet)."

The tweet didn’t cite a specific CDC source for its "COVID-19 survival rates." PolitiFact tried to reach Jimenez through messages to her Conservative Latina Twitter and Facebook accounts, but we did not hear back.

The figures line up with parameters included as part of CDC planning scenarios designed to help public health agencies model the impact of the pandemic.

In a September document labeled "COVID-19 Pandemic Planning Scenarios," the agency listed five sets of parameters that represented different levels of disease severity and transmissibility, with the goal of helping public health agencies make models to estimate the effects of the virus.

Lead Stories debunked a Facebook post citing the same scenarios to wrongly claim that the CDC had downgraded the severity of COVID-19 to something less than the flu.

The CDC document says the scenarios "are not predictions of the expected effects of COVID-19" and "do not reflect the impact of any behavioral changes, social distancing, or other interventions." It also says "uncertainty remains around nearly all parameter values."

The tweet also ignored the toll a seemingly small fatality rate can take when a disease spreads unchecked. Johns Hopkins University puts the observed case fatality ratio — calculated as the number of known deaths divided by the number of confirmed cases — at about 1.8% for the U.S. At that rate, if every American got COVID-19, there would be almost 6 million deaths.

Doctors have gotten better at treating the disease since the outbreak of the pandemic, PolitiFact reported. But the numbers of new COVID-19 cases and deaths reported each day in the U.S. have skyrocketed in recent weeks. "Excess deaths" remain above historical norms. The risk of severe illness from the coronavirus increases with age, the CDC says.

Survival rates are hard to estimate

In a pandemic, it’s difficult to nail down data points like survival rates, Prins told PolitiFact. Such rates are usually calculated for a longer period of time rather than as a snapshot.

"Deaths and reporting of deaths lag behind the identification of new cases, sometimes for months, so we never quite catch up with knowing who has ‘survived’ unless we set a time period that we’re looking at, like we do with five-year survival rates in cancers, or the disease goes away and we can look back at the pandemic as a whole," Prins said.

"In addition, we know that there are side effects of COVID-19 like myocarditis that may show up well after ‘recovery’ but could cause death at that later time, so both survival rates and mortality rates are more accurate after some time has passed."

A widespread vaccination effort would prevent more deaths, protect people from severe illness, slow the spread and put the U.S. on a path back to normal.

The CDC has not released survival rates, and it doesn’t have the data to do so. It’s not clear where the tweet’s numbers came from, but they correspond with figures listed as part of CDC "planning scenarios" used for planning a pandemic response.

Email interview with Jasmine Reed, spokesperson for the Centers for Disease Control and Prevention, Dec. 18, 2020 and Dec. 21, 2020

Email interview with Cindy Prins, assistant dean for educational affairs and a clinical associate professor of epidemiology at the University of Florida College of Public Health and Health Professions, Nov. 14, 2020