Bloggers
stated on January 25, 2020 in an article:
Says the Chinese Communist Party "will finally admit that the real source of the coronavirus is from ‘a lab in Wuhan’ linked to its covert biological weapon programs."

A website with ties to Steve Bannon and a Chinese billionaire is claiming to have a scoop on the source of the coronavirus.

In an article published Jan. 25, G News wrote that Chinese Communist Party officials would soon "admit that the real source of the coronavirus is from ‘a lab in Wuhan (China)’ linked to its covert biological weapon programs."

"A reliable source told Miles Guo today that the Chinese Communist Party (CCP) will admit to the public of an ‘accidental’ leak of lab-created virus from a P4 lab in Wuhan to put blames on ‘human errors,’" the article reads. "But the official announcement is still being finalized."

The article was flagged as part of Facebook’s efforts to combat false news and misinformation on its News Feed. (Read more about our partnership with Facebook.) It has been shared thousands of times. 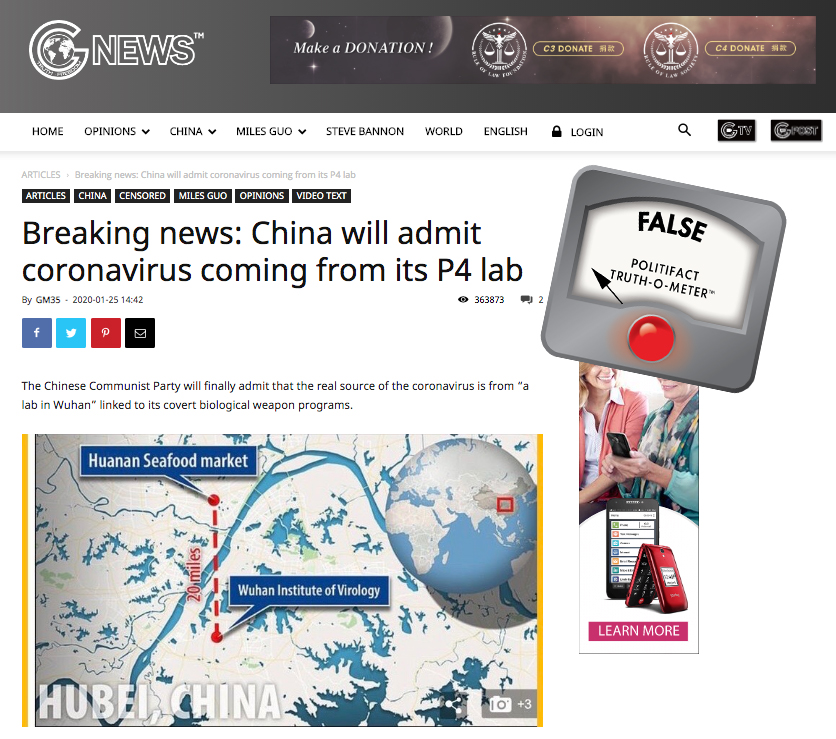 The coronavirus, which originated in the central China city of Wuhan, has infected more than 2,700 people worldwide, according to a Jan. 27 World Health Organization report. China has restricted travel within the country amid a rising death toll.

While we can’t know who G News has or hasn’t spoken to, we could find no evidence to support the website’s story.

Miles Guo, also known as Guo Wengui, is a Chinese billionaire and political activist. He fled China in 2014 in anticipation of corruption charges from the Communist Party. Since then, Wengui, who is a member of President Donald Trump’s Mar-a-Lago resort in Florida, has become known for his outspoken criticism of Chinese efforts to weed out corruption.

G News is the media arm of Guo Media, a company linked to Wengui. Axios reported in October that the company paid Bannon, Trump’s former chief strategist and former executive chairman of Breitbart News, at least $1 million for "strategic consulting services." Both Bannon and Wengui have their own sections on G News.

We could find no other media reports that corroborate G News’ story about the source of the coronavirus.

There is a lab near Wuhan that deals with dangerous pathogens — and some have linked it to China’s biological warfare program. The country denies having such a program, but the U.S. State Department has raised concerns about China’s potential noncompliance with the Biological Weapons Convention, which bans the production of such weapons.

Officials are still working to determine the source of the coronavirus outbreak. In its most recent situation summary, the Centers for Disease Control and Prevention said that both it and Chinese authorities had isolated the genome of the 2019 coronavirus.

Their findings suggest "a likely single, recent emergence from a virus related to bat coronaviruses and the SARS coronavirus." The disease appears to have originated at a seafood and animal market in Wuhan, and it spread from there to several Asian countries, Australia, France, Canada and the United States. Researchers believe the current outbreak pattern suggests the coronavirus may have spread from animal to human at first, and now from human to human.

G News’ story is inaccurate. We rate it False.

The New York Times Magazine, "The Mystery of the Exiled Billionaire Whistle-Blower," Jan. 10, 2018

U.S. Department of State, "2019 Adherence to and Compliance with Arms Control, Nonproliferation, and Disarmament Agreements and Commitments (Compliance Report)," August 2019