Facebook posts
stated on June 27, 2020 in a screenshot:
Nurses submitting coronavirus tests say they all are coming back positive.

What do Elon Musk and the winner of "Project Runway" Season 3 have in common? They’ve both shared unproven claims about false-positive coronavirus test results.

Since states started reopening in May, COVID-19 cases have increased in the United States. A June 27 post claims that’s because the labs that process coronavirus tests are falsifying results.

"It’s frightening how we’re being rail railroaded," reads the post, which is a screenshot of an Instagram post from Jeffrey Sebelia, the winner of the third season of "Project Runway." "My mom actually knows a nurse in San Francisco who was giving COVID tests. After every test came back positive she got suspicious. So she sent in two separate blank tests. Unused swabs. Those both came back positive."

Sebelia said his mom and some co-workers used fake names to submit 10 unused swabs that all tested positive.

"What the he’ll is going on ????" reads the post, which we cannot access since Sebelia’s account is private. "It’s beyond greed and money for hospitals. We are being controlled and manipulated beyond anything we could ever imagine."

The Facebook post was flagged as part of Facebook’s efforts to combat false news and misinformation on its News Feed. (Read more about our partnership with Facebook.) Similar posts have been shared thousands of times, according to CrowdTangle, an audience metrics tool. 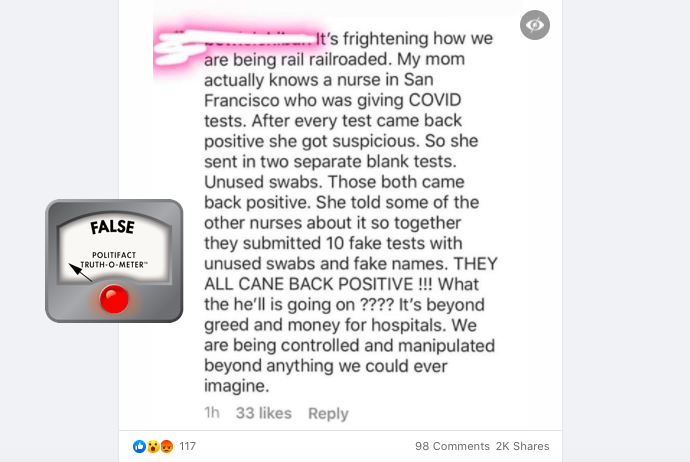 We reached out to Sebelia for evidence to back up his post. He told us it was a "word-of-mouth story" from his mom.

"She doesn’t lie but beyond that there is no proof," he said in an email.

Sebelia is right — there is no proof to back up his claims. But over the past several weeks, many social media users — including Musk, the CEO of Tesla and SpaceX — have passed on secondhand stories about fraudulent COVID-19 tests or unproven claims about false-positives. So we wanted to look into the notion that labs are falsifying COVID-19 test results.

While COVID-19 tests may sometimes produce false-positive results, there is no evidence that labs are deliberately manipulating samples. And public health officials are more concerned about false-negatives than false-positives.

There are three main coronavirus tests: diagnostic, antibody and antigen. Diagnostic tests look for the genetic material of the coronavirus in a sample that’s typically taken from a person’s nose or throat. Health care providers and public health officials use them to confirm whether someone has the disease.

Since diagnostic tests are considered the most common and reliable COVID-19 test, we’re going to focus on them.

There are more than 100 diagnostic tests that have received emergency use authorization from the Food and Drug Administration. Many cities and health care providers use private firms like LabCorp and Quest Diagnostics to provide and process diagnostic coronavirus tests. We reached out to both companies for a comment, but we haven’t heard back.

We could find no evidence that labs are deliberately altering coronavirus test results to create false-positives.

The accuracy of a coronavirus diagnostic test depends on several factors, including the timing of the test and how it was stored. There have been several cases of tests producing the wrong results.

In mid-May, the Food and Drug Administration issued a warning saying that a rapid-response test from Abbott Laboratories could produce false-negative results.

Abbott advised health care providers not to store patient samples in solutions known as "viral transport media." The company said the swabs should be placed directly into the device and then the test will work as expected.

The accuracy of COVID-19 tests, particularly for people who are not experiencing symptoms, is still uncertain. But false-positive results appear to be an outlier.

A LabCorp fact sheet for the company’s diagnostic coronavirus test says there is a "very small chance" the test can give false-positive results. The instructions for a similar test from the Centers for Disease Control and Prevention say that false test results are "highly dependent on prevalence."

That fact can have worse unintended consequences than false-positive results. People who receive false-negative results may not seek treatment for COVID-19 symptoms and risk infecting more people.

Sebelia’s post inspired a slew of copy-pasted hoaxes about COVID-19 testing. Many cite friends or family members, and they echo months-old conspiracy theories about the coronavirus pandemic.

The post is a screenshot of a now-deleted tweet from a user named Robert Tayman, whose account was created in February and regularly promotes conspiratorial content. He said in a follow-up tweet (also deleted) that the nurses are "close personal friends that work at a major hospital in Baltimore, Maryland." 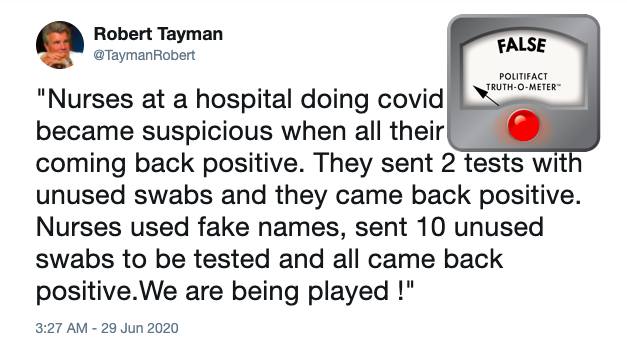 The Baltimore Department of Health denied commenting for this story.

Tayman’s tweet was deleted, but screenshots quickly made their way to Facebook, where they were shared thousands of times.

The first few posts with Tayman’s tweet were published in conservative and anti-media groups on June 29, according to CrowdTangle. At first, users started off linking to the tweet, but soon users were posting screenshots of the post. Eventually, the text of the tweet was copied and shared with no context at all — similar to how chain emails work.

"The consensus was not that +cases don’t exist, but that the numbers are exaggerated," reads text in the screenshot.

In each iteration of the post, the one clear theme is that every test comes back positive. But that belies the actual numbers hospitals and health departments are reporting. According to data compiled by the COVID Tracking Project, the rate of positive coronavirus tests has never exceeded 21.9% (that was in early April). The positivity testing rate hit a low of 4.4% in mid-June. Currently, it’s around 7%. That means 93% of tests produce negative results.

These recent posts were not created in a vacuum. Similar rumors have circulated recently in India and Turkey. And conspiracy theories that claim officials are falsifying coronavirus test results — or that the pandemic itself is fabricated — have been circulating online for months.

In late March, a website called the Cabal Times wrote about a video from a Swedish YouTuber who goes by the name Zakleo Se Bumbar. The video spins an elaborate conspiracy theory that asserts false-positive COVID-19 tests are driving the bulk of new cases.

We could find no evidence to back that up. Sebelia, the source of the claim, said it was a "word-of-mouth story" from his mom without proof. Similarly inaccurate or unproven claims about coronavirus tests have been circulating for weeks, many of which echo months-old conspiracy theories about the pandemic.

While COVID-19 tests may sometimes produce false-positive results, there is no evidence that labs are deliberately manipulating samples. Experts are more concerned about false-negatives, which could pose health consequences.

Business Insider, "Elon Musk is sending Tesla employees back to work in defiance of a California lockdown. His view of the coronavirus pandemic is dangerously misguided." May 11, 2020