Sean Hannity
stated on July 21, 2020 in an episode of his TV show:
The Trump administration has had “zero unfulfilled equipment and supply requests from state governors.”

President Donald Trump gestures towards a graphic on the coronavirus outbreak as he speaks during a news conference at the White House on July 23, 2020, in Washington. (AP/Vucci)

Fox News host Sean Hannity touted President Donald Trump’s coronavirus response, praising him for "huge decisions that save lives" and claiming, without evidence, that "this administration has fulfilled every request from every state governor."

"There have been zero unfulfilled equipment and supply requests from state governors," Hannity said July 21.

Trump made a similar comment at a press briefing hours earlier, saying the nation’s governors get "everything they need" and his administration has "zero unfilled requests."

But Maryland Gov. Larry Hogan, the chair of the National Governors Association, has disputed such claims, saying during a press conference the next day that "it’s obviously not the case" that governors have everything they need.

"We had a call today with, I believe, 48 governors from across America," Hogan, a Republican, told reporters. "There are still things that we really need."

Hogan cited "testing shortages" as one area of concern. "Not having supplies and running out of capacity across the country, it’s looking like it was back in March and April," he said, echoing the criticisms he made about the federal response in an op-ed headlined, "Fighting alone."

We’re not privy to private communications between governors and the White House. But we tried contacting all 50 states. Representatives from several told us they made requests for tests, personal protective equipment or other supplies that have yet to be filled — or were never filled.

Hannity’s claim that the administration has met "every request" overstates the administration’s supply of testing and equipment to states in what, from the beginning of the crisis, has been an absence of a coordinated national strategy. "We’re not a shipping clerk," Trump said in March.

The White House and Fox News did not respond to our requests for comment. 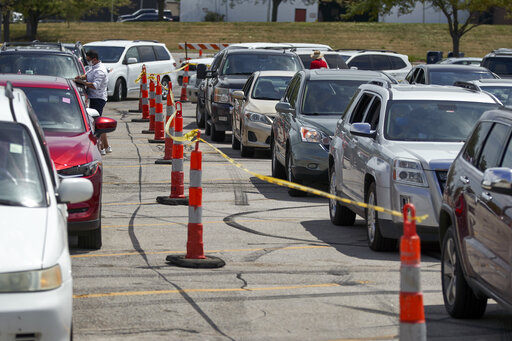 "There has been some progress on PPE and other equipment, as well as testing, but not all states have everything they need," said James Nash, press secretary for the National Governors Association.

The governors spelled out priorities for the federal government in an April letter to Congress, calling for increased access to test kits and equipment and funding for contact tracing, social services, and small business loans, among other things.

Some requests have been completely or partially fulfilled, Nash said. Others, including a request for congressional funding to stabilize state budgets and a request for the administration to delay changes to hospital reporting requirements, remain outstanding.

The Trump administration maintains that it is getting supplies where they’re needed. Rear Adm. John Polowczyk, the point person for coronavirus-related supplies, told the Washington Post in early July that he didn’t "have the sense of there being severe shortages."

"I’m not going to tell you we’re able to meet all demand, but there’s significantly less unfulfilled orders today than in April," Polowczyk said.

About a dozen state officials responded to our queries about the federal government’s handling of requests. Taken together, their responses painted the picture of an administration that hasn’t been as attentive to some states as Hannity described.

When Oregon asked for more testing supplies, the federal government sent a list of vendors and "suggested we call them on our own," said Robb Cowie, a spokesperson for the Oregon Health Authority.

North Carolina has similarly sought to increase testing. State officials asked in mid July for more federal testing sites to be set up in addition to the 13 in operation, said Kelly Haight Connor, a spokesperson for the state department of health and human services.

The state provided a list of nearly 60 zip codes where more testing is needed, but only one new site was added by July 22, Connor said. North Carolina had also received 57% of the swabs and 50% of the preservation substance for transporting specimens that it requested for July.

Washington Gov. Jay Inslee requested in a June letter that the administration use the Defense Production Act to produce more personal protective equipment.

Inslee spokesperson Mike Faulk called claims that governors have all they need "misleading" and cited data showing the federal government has provided just a fraction of the masks, respirators, gowns, gloves and ventilators that Washington has requested since late April.

"We are hearing from businesses and workers across Washington that they’re struggling to access PPE on the private market, are subject to price gouging, and being forced to use extreme conservation measures to stretch limited supplies over longer periods of time," Faulk said.

A handful of states are awaiting shipments or have orders under review. Maryland is waiting on a shipment date for a May order of 500,000 N-95 masks and 100 oxygen assemblies, said Charles Gischlar, a spokesperson for the Maryland Department of Health.

Some state representatives cited early problems but said the government has been responsive of late. Michael Pearlman, a spokesperson for Wyoming Gov. Mark Gordon, a Republican, said the state didn’t receive as many rapid response tests early in the crisis as it had requested, but he added: "I wouldn't say that Wyoming had specific requests that were not met."

The Pennsylvania Department of Health said the state has received most of what it has needed, but not everything it has requested. Spokesperson Nate Wardle said the state asked for about 1,000 ventilators early on, for example, but that it did not receive any.

"We were told that we would receive them if there ended up being a need, which there has not been," Wardle said. In April, Wardle and representatives from more than 30 other states told us they were not aware of any COVID-19 patients needing a ventilator and not getting one.

Representatives from other states — including Arizona, Arkansas, Colorado, and Ohio — said they have no outstanding requests. "This administration has made things happen when we've asked," said Patrick Ptak, a spokesperson for Arizona Gov. Doug Ducey, a Republican.

ABC News and CNN also queried all 50 states for their own fact-checks of Trump’s claims about the governors’ coronavirus needs. Both outlets heard from different states but found Trump’s claims to be inaccurate.

Hannity said, "This administration has fulfilled every request from every state governor."

That’s an exaggeration of the administration’s efforts to help states navigate the pandemic.

While some states said they have no requests outstanding, representatives from several others told us that they have requests they are waiting on or requests that were never filled.

Hogan, the Republican governor of Maryland and chair of the National Governors Association, said "it’s obviously not the case" that governors have everything they need.

Fox News on YouTube, "Hannity: Why CNN won't highlight progress in the fight against COVID," July 21, 2020

The New York Times, "What Governors Say About Trump’s Response to Coronavirus," March 11, 2020

PolitiFact, "Are states in a bidding war over medical gear with the feds?," April 1, 2020

Email interview with Charles Gischlar, deputy director of communications for the Maryland Department of Health, July 23, 2020