Facebook posts
stated on June 10, 2020 in a text post:
NFL will fly a “‘Black Lives Matter’ flag under the American flag at games.”

Denver Broncos personnel take part in a June 6, 2020, rally at a downtown Denver park over the death of George Floyd. (AP)

On the same day that NASCAR announced it was banning the Confederate flag from its races, Facebook users started to share rumors about another race-related change at sporting events.

A June 10 text post claims that the NFL is planning to fly a "‘Black Lives Matter’ flag under the American flag at games."

"Your thoughts?" asks the post, which was flagged as part of Facebook’s efforts to combat false news and misinformation on its News Feed. (Read more about our partnership with Facebook.)

The rumor was published as tens of thousands of Americans across the country peacefully protest against police brutality and discrimination against black Americans. The protests began after the death of George Floyd in Minneapolis police custody. 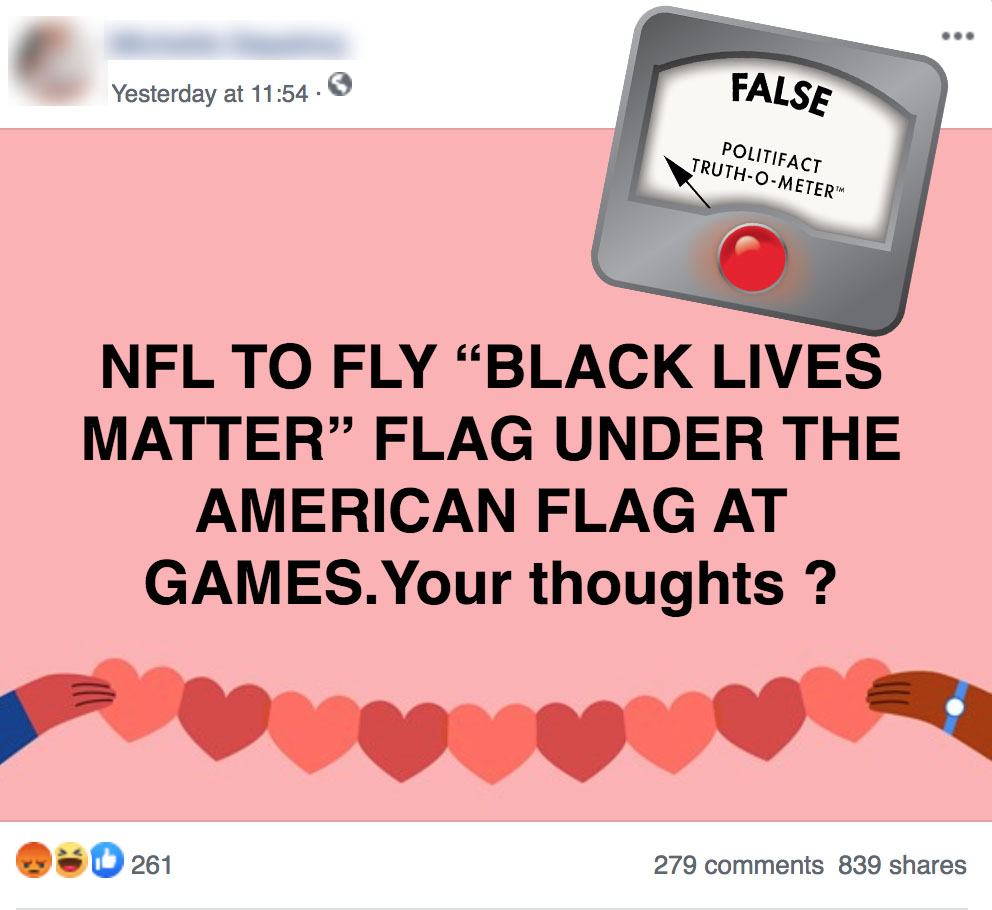 We reached out to the original poster for their evidence, but they didn’t supply any. Instead, they deleted the post. (We found several similar posts from conservative Facebook pages.)

While NFL Commissioner Roger Goodell said in a recent statement that "black lives matter," there is no evidence that the league is planning to fly a flag associated with the movement at football games.

Viral image
stated on June 10, 2021 in a Facebook post
Coca-Cola made cans that say “Try to be less white.”

On June 5, the NFL released a video of Goodell talking about "racism and the systematic oppression of Black People."

We, the NFL, condemn racism and the systematic oppression of Black People. We, the NFL, admit we were wrong for not listening to NFL players earlier and encourage all to speak out and peacefully protest. We, the NFL, believe Black Lives Matter. #InspireChange pic.twitter.com/ENWQP8A0sv

The video was a nod to Colin Kaepernick, a civil rights activist and former quarterback for the San Francisco 49ers, though Goodell did not mention him by name. Kaepernick, who led the 49ers to the Super Bowl in 2013, returned to the spotlight during the 2016 season for choosing to sit or kneel during the pregame national anthem in protest of police brutality and discrimination against black Americans — a move that the NFL did not endorse.

Kaepernick has not played in the NFL since that season. His 2017 grievance against the league, alleging that NFL teams colluded to keep him off their rosters, was settled in 2019.

Nowhere in Goodell’s statement did he say that the NFL would fly a Black Lives Matter flag at football games. We could find no such promise on the league’s Twitter page, its website or reported in the media.

We reached out to the NFL for a comment, but we haven’t heard back.

The Washington Post, "A timeline of Colin Kaepernick’s protests against police brutality," June 1, 2020