Candace Owens
stated on June 11, 2020 in a tweet:
“According to its website Black Lives Matter, Inc is NOT a charity. It is a full-fledged corporation that does NOT have any locations.”

A giant "BLACK LIVES MATTER" sign is painted in orange on Fulton Street on June 15, 2020, in the Brooklyn borough of New York. (AP)

As donations continue to flow into Black Lives Matter, some conservative commentators claim the civil rights organization behind the movement is not an actual charity.

"According to its website Black Lives Matter, Inc is NOT a charity. It is a full-fledged corporation that does NOT have any locations," said Candace Owens in a June 11 tweet. "Can anyone tell me then where the hundreds of millions BLM has raised goes?"

The tweet, which has also been shared as a screenshot on Instagram, has been retweeted more than 47,000 times.

We previously fact-checked a false claim that donations to Black Lives Matter are funneled to ActBlue, a nonprofit technology company that helps Democratic campaigns and causes raise funds. So we wanted to look into this post, too. 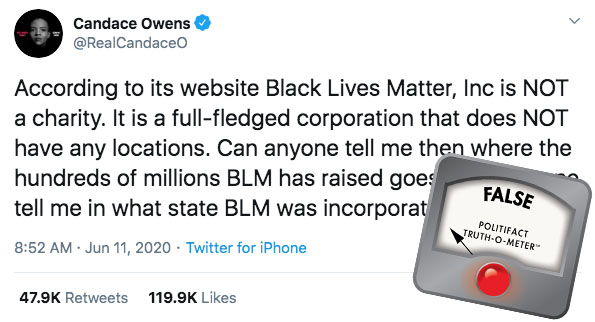 The Black Lives Matter movement is decentralized with no formal hierarchy. It was co-founded by three black community organizers in 2013, Patrisse Khan-Cullors, Alicia Garza and Opal Tometi, following the acquittal of George Zimmerman in the shooting death of Trayvon Martin in Florida.

Khan-Cullors, Garza and Tometi created Black Lives Matter Global Network as an outgrowth of that movement, with a stated mission to "build local power and to intervene when violence was inflicted on Black communities by the state and vigilantes." The network was incorporated in Delaware in November 2016, according to the state’s corporations division.

But nowhere on its website does the Black Lives Matter Global Network describe itself primarily as a "corporation," as Owens claimed — and the organization still operates as a charity.

Incorporation is a common first step toward becoming a nonprofit organization because it offers tax advantages and legal protections. While nonprofits that incorporate are technically corporations, they are still considered nonprofits. Why?

"Congress has created almost three dozen types of tax-exempt organizations in different sections of the tax code," says the National Council of Nonprofits. "The one common condition is not paying out profits" to owners or shareholders.

For example, the Poynter Institute for Media Studies, which owns PolitiFact, is incorporated in Florida and uses its earnings to develop teaching programs and online content for journalists. The institute also has an incorporated foundation.

In 2016, the Black Lives Matter Global Network approached Thousand Currents, a nonprofit organization that partners with grassroots groups and movements, to create a fiscal-sponsorship agreement. Fiscal sponsorships are set up when a charitable organization is "not yet recognized as tax-exempt under Internal Revenue Code Section 501(c)(3)," according to the National Council of Nonprofits.

"In this capacity, we provide administrative and back-office support, including finance, accounting, grants management, insurance, human resources, legal and compliance," a spokesperson for Thousand Currents said in an email. "Donations to BLM are restricted donations to support the activities of BLM."

However, some financial information about the Black Lives Matter Global Network is available on Thousand Currents’ most recent financial audit.

In a June 11 statement, the Black Lives Matter Global Network Foundation announced the creation of a $6.5 million fund for grassroots organizing efforts. The fund is available to all chapters affiliated with the network and will give unrestricted grants of up to $500,000.

The Black Lives Matter Global Network has active chapters in 16 cities in Canada and the United States, according to its website. Most chapters have a website and corresponding social media profiles, many of which are verified.

We reached out to the Black Lives Matter Global Network repeatedly for a comment, but we haven’t heard back.

Regardless, Owens’ tweet is inaccurate. We rate it False.

Fortune, "Founders of #BlackLivesMatter: Getting credit for your work matters," July 19, 2015