Instagram posts
stated on June 14, 2020 in an image:
Nazi Germany’s Hermann Göring worked to "defund and eliminate the police departments so that they would not interfere with his Brown Shirts."

Conservative Facebook and Instagram accounts are criticizing calls to defund the police by comparing them to Nazi Germany.

A June 14 post from an Instagram account called Republican Army claims that, after Adolf Hitler appointed Hermann Göring as interior minister in 1933, Göring worked to "defund and eliminate the police departments so that they would not interfere with his Brown Shirts."

"The Brown Shirt’s (sic) mission was to riot, burn, beat up and kill citizens in an effort to sway the elections to ensure their National Socialist agenda," reads text in the image, which includes a photo of men in uniform blocking the entrance to a building. "Now today’s American socialist leaders want to defund and eliminate the police? Is history repeating itself?"

The post was flagged as part of Facebook’s efforts to combat false news and misinformation on its News Feed. (Read more about our partnership with Facebook, which owns Instagram.) It has thousands of likes, and several similar posts have been shared by other Instagram and Facebook users — including at least one candidate running for Senate. 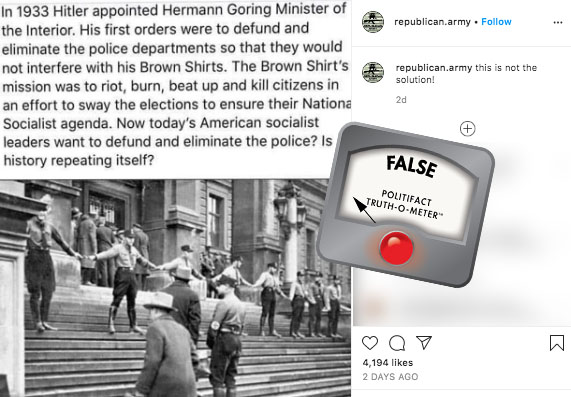 Since the death of George Floyd in Minneapolis police custody in late May, demonstrators around the country have protested against police brutality and discrimination against black Americans. Some activists have called to "defund the police."

Did Hitler — who oversaw the murder of millions of Jews and other marginalized groups during the Holocaust — call for a similar action? We opened our history books to investigate.

The Instagram post is inaccurate. While the Nazis reorganized German police forces, it had nothing to do with elections — and they did not defund or eliminate police departments. The photo in the post shows Nazis blocking Jews from entering the University of Vienna in 1938.

"There was literally no movement ever to defund or eliminate police departments in Nazi Germany," said Waitman Beorn, a senior lecturer in history at Northumbria University, in a Twitter thread about the post. "The terminology of ‘defunding the police’ has no analogy there."

How the Nazis reorganized German police

First, let’s review some facts about Göring, Hitler’s rise to power and the "Brownshirts."

Göring was a high-ranking Nazi official and one of Hitler’s closest allies. He is credited with helping to create the Nazi police state in Germany.

Göring joined the National Socialist German Workers’ (Nazi) Party in 1922. Hitler, who had assumed control of the party one year prior, gave Göring command of the Brownshirts or "Storm Troopers," officially known as the Sturmabteilung (SA). The paramilitary organization was outfitted in brown uniforms and tasked with protecting party meetings, intimidating voters and assaulting political opponents.

In 1932, after the Nazis won 230 seats in the Reichstag, Göring was elected president of the German legislative body. But Paul von Hindenburg, president of the Weimar Republic, was reluctant to appoint Hitler as chancellor.

That changed in January 1933, when — after a series of negotiations — Hitler was appointed head of state.

After Hitler became chancellor, he appointed Göring to his cabinet and, later, interior minister of Prussia — not of the entire country, as the Instagram post implies. And instead of eliminating police forces, he created a new one.

Göring used his position to Nazify the Prussian police and establish the Gestapo. The political police force was tasked with eliminating opposition to the party and later worked in tandem with the Schutzstaffel (SS) to deport Jews to concentration camps.

"This had ZERO to do with elections. There were no more free elections after 1933," Beorn said in his Twitter thread.

RELATED: No, gun control regulation in Nazi Germany did not help advance the Holocaust

In February 1933, Göring authorized the appointment of the SA and the SS as auxiliary police personnel, which co-opted the Brownshirts into the regular police force. Simultaneously, Heinrich Himmler, head of the SS, similarly reorganized the police of the remaining German states. In April 1933, the Nazis passed a law that allowed state interior ministries to purge police personnel, which led to the firing of "non-Aryan" officers and those who had opposed the Nazis.

That strategy — while it did fundamentally change the nature of policing in Germany in the lead-up to World War II — was not akin to defunding and eliminating police departments.

"The very moment the Nazis were in power in each of the German states, they could simply change personnel as well as policies in local police departments," said Thomas Weber, a history and international affairs professor at the University of Aberdeen who has authored several books about Hitler. "This meant that the Nazis had full control over police departments the moment they took over the state government in which that particular police department lay."

"It would thus simply have made no sense for the Nazis to defund or eliminate police departments, as they already had full control over them."

"Defund the police" has become a rallying cry for some activists protesting police brutality against black Americans. But the phrase means different things to different people.

In a June 8 "Ask Me Anything" thread on Reddit, Kailee Scales, managing director of the Black Lives Matter Global Network, said the group is calling for "divestment in police in order to support more teachers, mental health and restorative services, and community resilience departments, social workers, and government resource liaisons."

"I know that sounds like a lot to take in, but simply, it is the idea of creating the ‘American Dream’ for all — less cops on streets and better schools and social programming," she said in the thread.

The argument for defunding the police goes like this: Many police departments across the country have large budgets. Other departments, such as those that oversee public health and family services, have smaller budgets. Some activists say that, by shifting money from police departments to other parts of municipal government, violence against black Americans would go down.

Meanwhile, some are calling for police departments to be abolished altogether.

In Minneapolis, where Floyd died after a white police officer kneeled on his neck, most city council members have pledged to dismantle the police department.

However, the details are still up in the air. Council President Lisa Bender tweeted that the police department would be replaced "with a transformative new model of public safety." But she has also said that, while she doesn’t want to invest in more policing, the idea of having no police department "is certainly not" in the short-term plan.

Regardless, both abolishing and defunding the police are very different from Hitler and Göring’s strategy of Nazifying the police in 1930s Germany. However, the distinction comes with a caveat.

That’s wrong. In reality, the Nazis relied on police forces to maintain control of Germany and commit genocide in the lead-up to World War II. That is very different from today’s calls to "defund the police," which can mean anything from divesting from police departments to abolishing the police altogether.

Email interview with Thomas Weber, history and international affairs professor at the University of Aberdeen, June 17, 2020

PolitiFact, "‘Defund the police’ movement: What do activists mean by that?" June 9, 2020

Reddit, "I am Kailee Scales, Managing Director for Black Lives Matter. Ask me anything." June 8, 2020

Bloggers
stated on August 5, 2020 an article:
“Israel dropped a tactical nuclear weapon on the port of Beirut.”

Facebook posts
stated on July 25, 2020 an image:
A patch on law enforcement officers in Portland is for “ZTI solutions, a PRIVATE contractor.”

Stella Immanuel
stated on July 27, 2020 a press conference:
“This virus has a cure. It is called hydroxychloroquine, zinc, and Zithromax. I know you people want to talk about a mask. Hello? You don’t need (a) mask. There is a cure.”

Facebook posts
stated on July 20, 2020 a text post:
“Teachers are the number one occupation of the antifa terrorist organization according to the FBI.”

Instagram posts
stated on July 18, 2020 an image:
“Since Trump labeled ANTIFA a terrorist organization their rights were stripped by the Patriot Act which states if someone is labeled a terrorist they are not afforded due process.”

Facebook posts
stated on July 7, 2020 an image:
Lists eight wealthy politicians and public figures who “got millions (or close to it) in PPP loans.”

Facebook posts
stated on June 27, 2020 a screenshot:
Nurses submitting coronavirus tests say they all are coming back positive.

Instagram posts
stated on June 23, 2020 an image:
A “face mask exempt card” allows you to cite the ADA and not wear a mask.

Facebook posts
stated on June 24, 2020 an image:
Google and Apple “put a covid tracker on every phone.”

Bloggers
stated on June 12, 2020 an article:
“163 paid protesters just filed a lawsuit against George Soros for not paying their bail.”