Dane Eagle
stated on June 22, 2020 in a social media ad:
Antifa “are killing our police. Looting our businesses. Assaulting the elderly and burning our churches.”

State Rep. Dane Eagle made a series of claims about antifa in a social media ad for his Florida Congressional primary.

A Republican running in a Florida congressional primary blames antifa for recent acts of violence and destruction in the United States, according to an ad running on social media.

State House Majority Leader Dane Eagle’s ad opens with a montage of images showing looting, assault, arson and a reference to the shooting death of a retired police captain.

"Antifa terrorists have declared war on our country," Eagle says as the ad begins. "They are killing our police. Looting our businesses. Assaulting the elderly and burning our churches."

The ad portrays multiple national Democrats as being antifa sympathizers and includes a claim that former Vice President Joe Biden was "bailing the terrorists out of jail."

We found that some Biden campaign members — not the campaign itself — donated individually to the Minnesota Freedom Fund, a nonprofit that pays bail for low-income people. But there is no suggestion that the individuals who received these funds are accused of terrorism, according to Greg Lewin, interim executive director for the fund.

RELATED: No, George Soros and his foundations do not pay people to protest

Eagle is one of many Republicans running in an August primary to replace U.S. Rep. Francis Rooney, who is retiring from the safe GOP seat in coastal southwest Florida.

We wanted to take a closer look at the ad’s claim connecting antifa to these violent acts.

Antifa refers to a collection of far-left, anti-fascist groups that rally against white supremacy and other causes, at times using violence. The antifa movement goes back decades, but regained attention after groups counterprotested white nationalists in Charlottesville, Va., in August 2017.

President Donald Trump and his allies have said that far-left groups, including antifa, are responsible for recent looting. But antifa, which is short for anti-fascist, is not an organization with an official membership, leader or base of operations. Some individuals self-identify with antifa.

We asked Eagle’s campaign for evidence that antifa was behind the violence and looting shown in the ad. Campaign manager Terry Miller responded with general statements but did not provide specific evidence.

Miller said that U.S. Attorney General William Barr identified antifa as sowing unrest and violence during peaceful demonstrations. Barr in a May 31 statement said, "The violence instigated and carried out by antifa and other similar groups in connection with the rioting is domestic terrorism and will be treated accordingly."

Thousands of people have been arrested amid the nationwide protests following Floyd’s death, not all for acts of violence. The number has included curfew violators, working press and others. It isn’t possible to know how many were motivated by any particular political belief or association, but government intelligence reports, media reports and interviews with experts show no evidence that antifa played any significant role.

Let’s take a look at each image that flashes as Eagle makes each part of his claim: 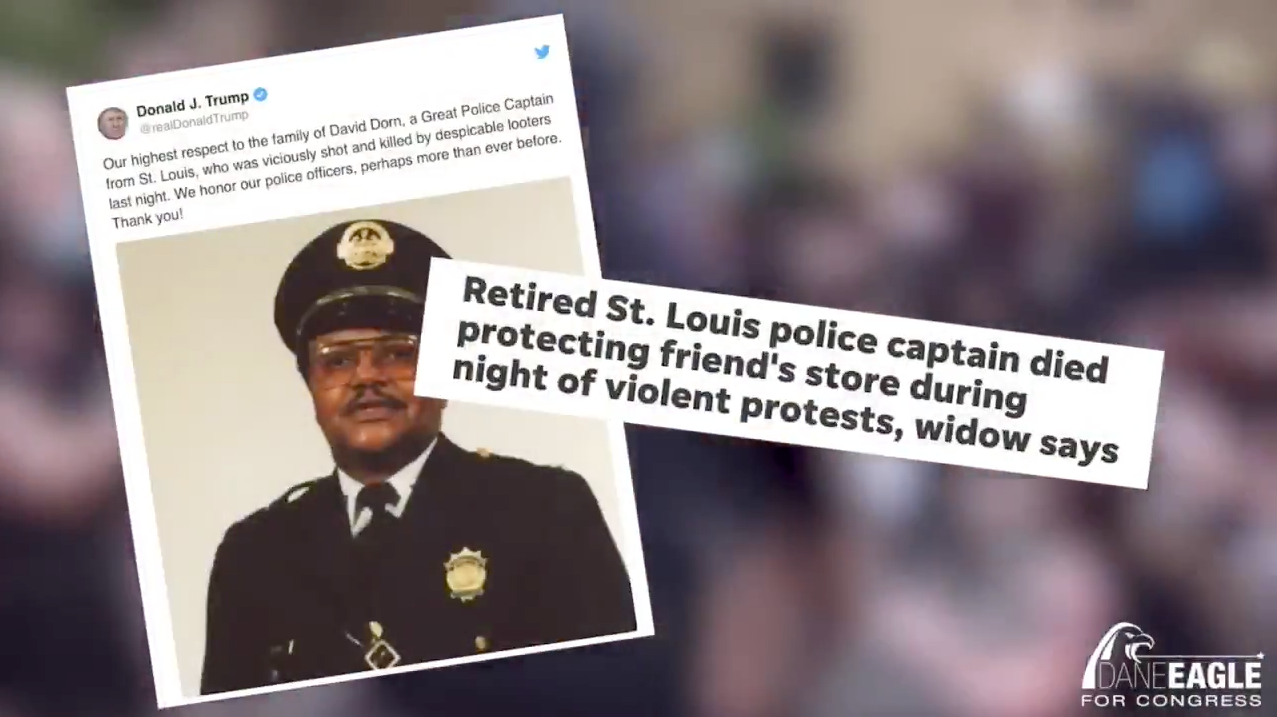 "Killing our police": The ad shows a picture of a tweet by Trump about David Dorn, a retired St. Louis police captain who was working security at a pawn shop June 2 when he was fatally shot. The killing happened on a night of violence about a week after Floyd’s death. Two men  were charged with murder, but court documents explaining charges against them make no mention of antifa.

"There is absolutely no evidence to support the allegation of antifa’s involvement of the killing of former Capt. David Dorn," Allison Hawk, a spokesperson for Circuit Attorney Kimberly Gardner told PolitiFact in an email. 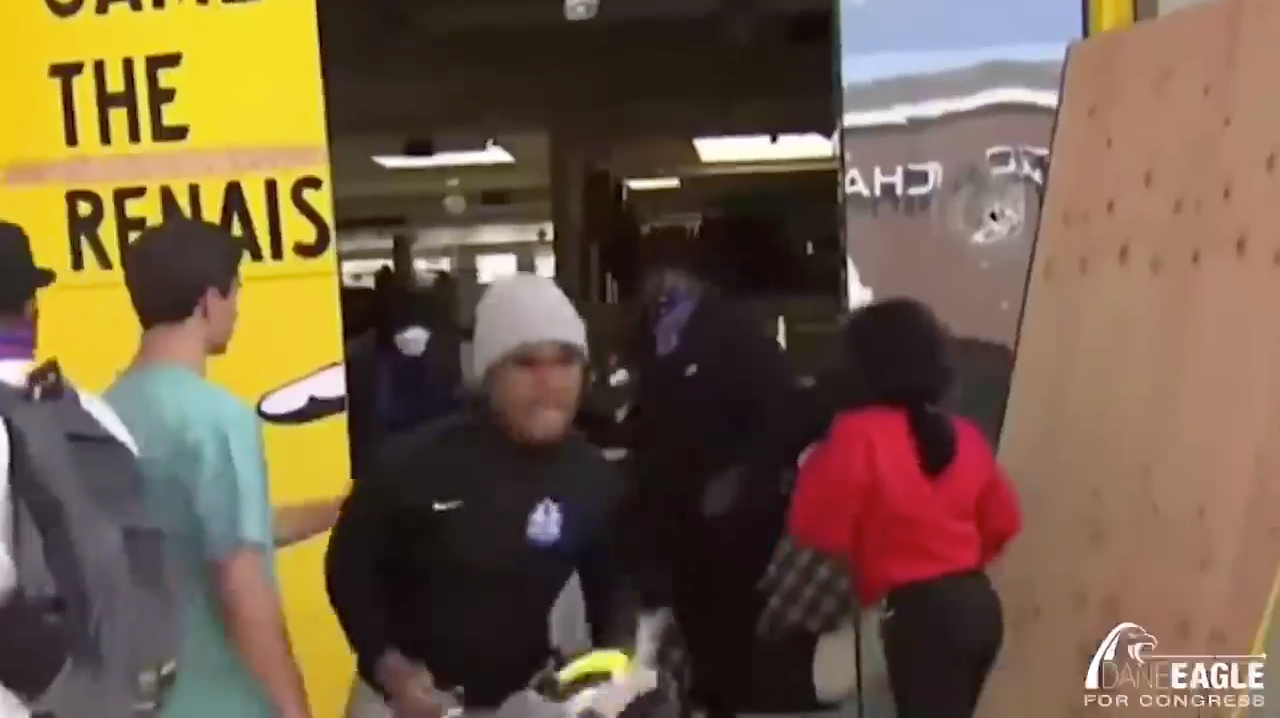 "Looting our businesses": The video that rolls resembles video of looting that was uploaded by a Russian magazine. We traced the video to an instance of looting at a store in Santa Monica, Calif., in late May. News reports we read did not mention evidence that antifa was behind the looting there. A police captain told us that the investigation is ongoing, but there is currently no evidence to support that the suspects identified with antifa. 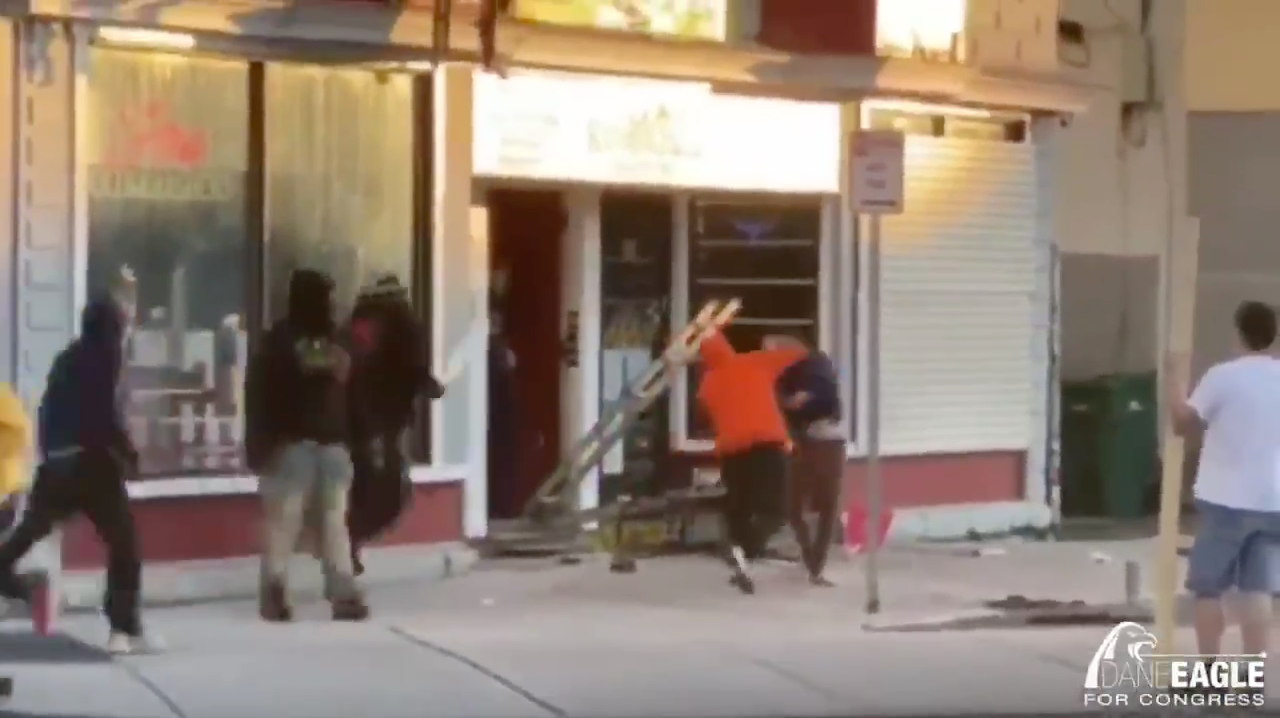 "Assaulting the elderly": Another clip in the ad resembles news footage of an attack on a woman in Rochester, N.Y., outside the Rochester Fire Equipment Co.. A woman in the video pleaded with people smashing the building to stop.  A city spokesperson told us there was no evidence that antifa was involved and the victim was in her 20s. 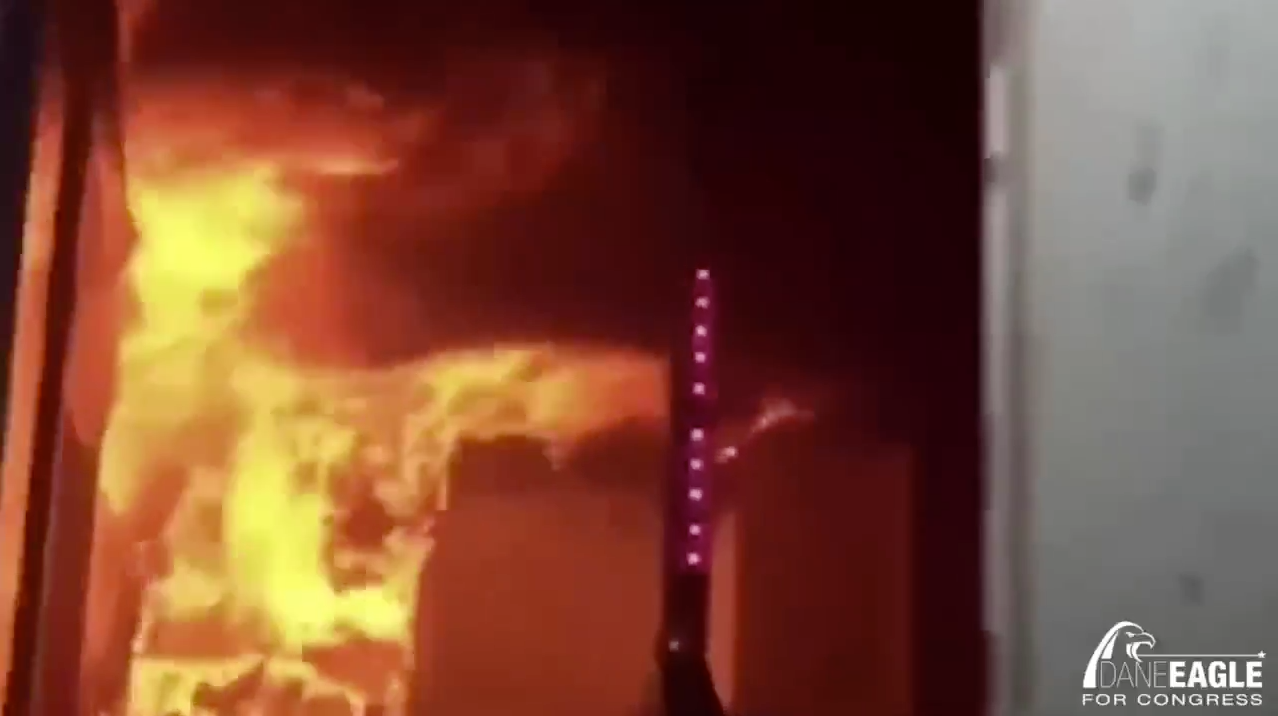 "Burning our churches": Eagle’s campaign told us that the video clip of the fire in the ad was St. John’s Episcopal Church in Washington, D.C., where riots on May 31 followed peaceful protests. No arrests have been made in that incident, but a police spokesperson told us that there is no evidence to suggest members of antifa are responsible.

We found one image in Eagle’s ad did show antifa supporters in Portland, Ore., but the ad omits any context. The photo, which shows masked people lock-armed in a row wearing black, was taken Aug. 17, 2019, when antifa followers faced off against right-wing protesters at an event organized by a former InfoWars staffer.

Experts: No proven ties to antifa

Three experts in extremism or antifa told us that they found no evidence that antifa was the instigator behind any of the violence that erupted amid otherwise peaceful protests following Floyd’s death.

Mark Bray, a Rutgers University lecturer and author of a book about antifa, called claims about antifa’s involvement "an attempt by Trump and like-minded people to create a bogeyman." Bray pointed to a report by The Nation based on a leaked internal report by the FBI’s Washington field office. It found "no intelligence indicating antifa involvement/presence" in the violence that occurred on May 31 during the D.C.-area protests.

Most of the looting was done by people with no affiliation or political objectives, said Seth Jones, an expert on counterrorism at the Center for Strategic and International Studies.

"I have seen no credible evidence that organized groups — whether antifa, anarchists, white supremacists, or anti-government militia — have been behind most of the looting," said Jones, who has interviewed individuals from FBI Joint Terrorism Task Forces as well as local law enforcement agencies.

We asked the FBI if it had evidence that antifa is behind any looting or property destruction in recent weeks in the United States. A spokesperson replied "no comment."

The U.S. Justice Department media office did not respond to our emails asking about antifa. However, a spokesperson told the Washington Post’s Fact Checker that "we do not collect statistics based on potential inspiration but on unlawful acts according to statute." The Post found that police had arrested more than 14,000 people across 49 cities, thousands for low-level crimes. Of roughly 80 federal charges the Post found, none cited an antifa plot. Many were arrested for minor, nonviolent offenses such as violating curfew or carrying an open container. The New York Times review of dozens of arrests on federal charges showed no coordinated effort by antifa.

Eagle said in a social media ad that antifa "are killing our police, looting our businesses, assaulting the elderly and burning our churches."

Eagle’s campaign broadly blames antifa for violence and property destruction, echoing a statement by U.S. Attorney General William Barr. But the campaign didn’t point to proof that antifa was behind any specific act of violence or criminal behavior.

We found no evidence that antifa has played any significant role in any of the violence that broke out amid recent peaceful protests against police brutality.

Rochester Democrat and Chronicle, 'They're terrified.' Mom of woman attacked in viral video during Rochester unrest speaks out, June 1, 2020

The Oregonian, Portland protests Aug. 17: What you need to know

Washington Post, Who caused the violence at protests? It wasn’t antifa. June 22, 2020

Washington Post, Among more than 400 arrested during protests in the District, most cases involve curfew violations and burglary, June 16, 2020

NPR, No Sign Of Antifa So Far In Justice Department Cases Brought Over Unrest, June 9, 2020

PolitiFact, No, George Soros and his foundations do not pay people to protest, June 1, 2020

Email interview, Seth Jones, an expert on counterrorism at the Center for Strategic and International Studies, June 24, 2020