A man wearing a protective face mask walks by a poster in Beijing promoting the protection of wildlife, on March 11, 2020. (AP)

Vegan Instagram users are pinning the 2019 coronavirus outbreak on carnivores.

In a post published March 15, the account for "Cowspiracy," a film about the environmental impact of meat production, claimed that COVID-19 started "because we eat animals."

"COVID-19 would not exist if the world was vegan," reads the image.

The post was flagged as part of Facebook’s efforts to combat false news and misinformation on its News Feed. (Read more about our partnership with Facebook, which owns Instagram.) It had more than 27,000 likes as of March 18. 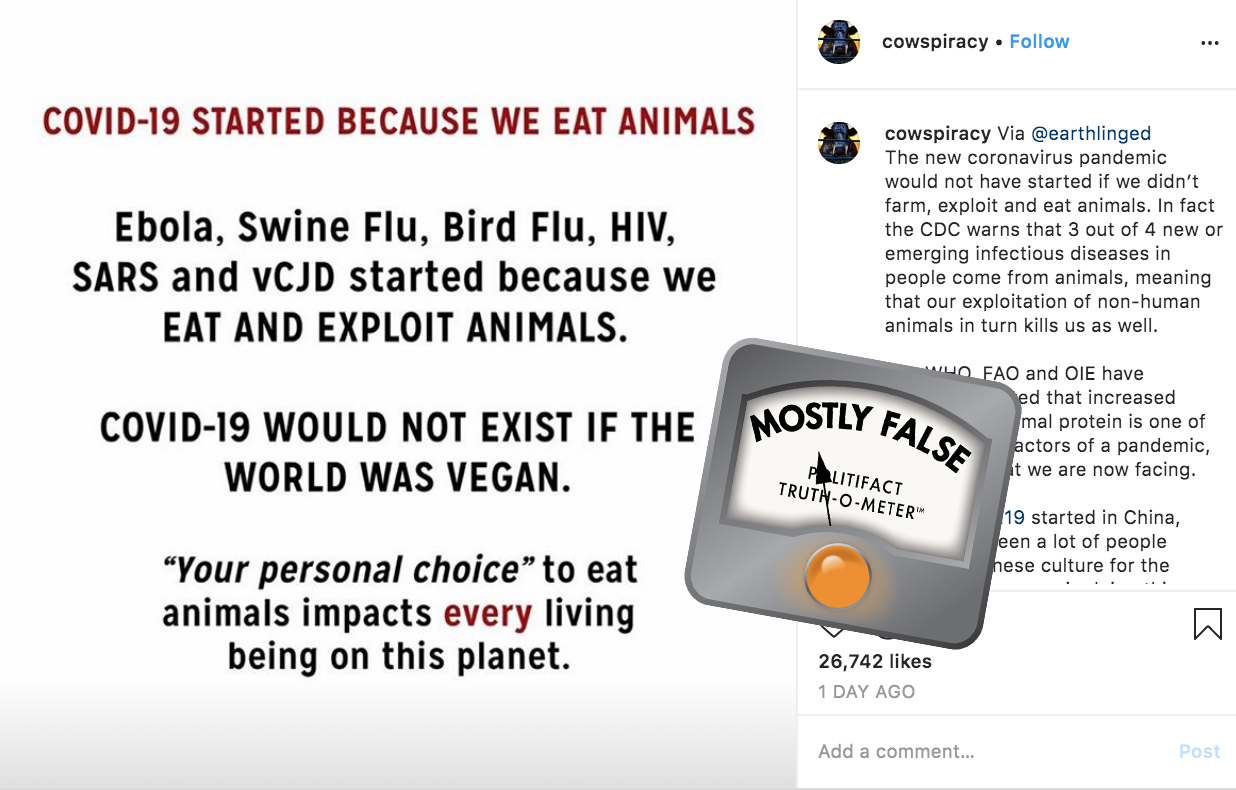 Early on in the coronavirus pandemic, which had infected more than 179,000 people worldwide as of March 17, we saw a lot of baseless claims pinning the disease on the consumption of bats in China. Cowspiracy’s Instagram post piggybacks on that misinformation.

As evidence, it refers to the Instagram account for Ed Winters, a vegan activist based in the United Kingdom. His March 14 post cites the Centers for Disease Control and Prevention and the World Health Organization to back up his claim about meat consumption causing the COVID-19 outbreak.

On its website, the CDC says that "3 out of every 4 new or emerging infectious diseases in people come from animals." And the WHO has said that eating "raw or undercooked animal products, including milk and meat" carries a potential risk for infection from Middle East Respiratory Syndrome (MERS), another human coronavirus.

But neither statement supports the link that the activist draws between COVID-19 and meat-eating. Scientists are still trying to figure out the source of COVID-19, but there is no evidence that the outbreak began because of meat consumption.

According to the CDC, COVID-19 is a betacoronavirus similar to MERS and Severe Acute Respiratory Syndrome (SARS). All three originate in bats, and the recent COVID-19 outbreak suggests a "likely single, recent emergence of this virus from an animal reservoir."

There’s plenty of scientific literature linking human coronaviruses to bats and other wild animals, particularly horseshoe bats in China. However, those studies stipulate that "intermediate hosts" are needed between bats and humans for the disease to spread — and meat isn’t necessarily part of the equation.

For example, scientists first thought the Ebola outbreak started with the consumption of bat meat in Guinea. But Time reported that patient zero was likely infected by bat droppings that contaminated something she put in her mouth. MERS was also primarily spread through contact with live camels as opposed to camel meat.

One of the first studies published about COVID-19 by Chinese researchers found that the virus could come from the same bats that were the source of the 2003 SARS outbreak. But the researchers cautioned that it’s "likely there was intermediate host(s) in the transmission cascade from bats to humans."

More recent studies of COVID-19 suggest that pangolins, scaly anteaters, could be that intermediate host. The animals are sought-after in China for their meat and scales, despite a worldwide ban.

However, scientists have yet to find conclusive proof that pangolins are to blame for the coronavirus. And as of now, there is no evidence that eating meat is the source of the COVID-19 pandemic.

The Instagram post contains an element of truth but ignores critical facts that would give a different impression. We rate it Mostly False.

SCIENCE CHINA Life Sciences, "Evolution of the novel coronavirus from the ongoing Wuhan outbreak and modeling of its spike protein for risk of human transmission," Jan. 20, 2020