Facebook posts
stated on March 15, 2020 in a Facebook post:
“So Oscar Health, the company tapped by Trump to profit from covid tests, is a Kushner company. Imagine that, profits over national safety.”

A health care startup linked to the family of Jared Kushner recently launched a website to help Americans assess their symptoms for the novel coronavirus and locate nearby testing centers.

The timing of Oscar Health’s testing locator coincided with President Donald Trump’s surprise announcement of a partnership with Google to build a similar website for the Bay Area.

Perhaps it’s not surprising, then, that a rumor circulating on social media claims that Trump "tapped" his son-in-law’s company for a testing-related project.

"So Oscar Health, the company tapped by Trump to profit from COVID tests, is a Kushner company," the March 15 Facebook post says. "Imagine that, profits over national safety."

The company does have a Kushner-family connection, and Jared Kushner has played a role in the White House’s coronavirus response efforts. But the Facebook post goes slightly too far in claiming that Trump "tapped" Oscar Health to profit from COVID-19 testing.

Jared Kushner, Trump’s son-in-law and senior adviser, is connected to Oscar Health through his brother Joshua, a co-founder and investor in the health insurance start-up.

Mother Jones reported that a 2013 report from the New York State Department of Financial Services showed Jared Kushner was also a big player in Oscar early on.

Mother Jones also identified a 2018 New York State Department of Financial Services report, which said that as of December 2015, Joshua Kushner was "the ultimate controlling person."

Public financial disclosure forms for Jared Kushner and his wife, Ivanka Trump, show that the couple owned and received capital gains from shares of Thrive in 2017 and 2018 but divested from Thrive-associated funds in 2017. Their 2019 disclosures show no earnings from Thrive.

Jared Kushner did seek advice from Joshua Kushner’s father-in-law, a physician, when helping to craft the White House’s coronavirus response, according to the New York Times.

It’s too soon to tell how much Oscar Health could profit off the coronavirus crisis. As an insurer, the company is not manufacturing or conducting tests, as far as we could tell.

Oscar Health did not respond to multiple requests for comment. But we were able to complete Oscar’s risk assessment free of charge, and the page for locating testing centers said "the cost of COVID-19 testing for Oscar members at any facility is $0."

It’s possible that Oscar could still charge customers for health services associated with seeking a coronavirus test when a test isn’t ultimately produced, however.

Did Trump "tap" Oscar Health to help with testing?

We found no evidence that Trump formally tasked Oscar Health with helping to ramp up testing for the coronavirus, or that the company’s testing website was created at the White House’s request. (The White House declined to comment on the record.)

Business Insider reported that the company agreed to share the code it used to power its online portal for free with the HHS Department, which is building a similar website.

"Last week, the Oscar team built a COVID-19 risk assessment and testing center locator for our members," a spokeswoman for Oscar told Business Insider. "The U.S government asked if we could share our code so that they could customize it for the website they are developing."

HHS reached out to Oscar about the code on March 13, according to Business Insider. That’s the same day that Oscar rolled out its online portal in a press release. It’s also the same day that Trump announced a partnership with Google to build a similar website.

It’s important to plan for COVID-19, even if you’re not currently experiencing symptoms. We’ve created a survey and the country’s first testing center locator to help you understand your risk and make a plan for you and your family. Find out more: https://t.co/KJxwccacRV pic.twitter.com/nlK47xhNtj

That timing likely fueled speculation on social media about an improper link between Oscar Health’s project and the White House’s broader testing efforts.

As the Verge reported, a diagram that the White House displayed during a press briefing that day resembled the step-by-step description Oscar Health gave in its press release. 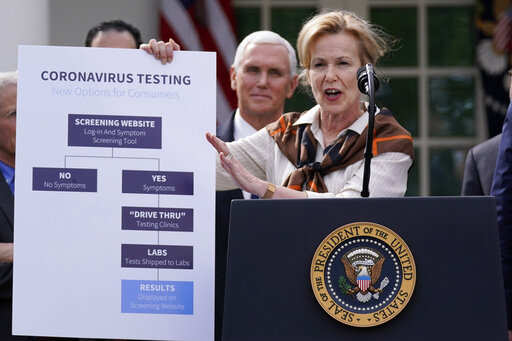 But in reference to the diagram shown at the March 13 White House press conference, a White House spokesperson told Mother Jones that "Oscar had no involvement in this."

HHS referred us to the White House without comment.

A Facebook post says: "So Oscar Health, the company tapped by Trump to profit from covid tests, is a Kushner company. Imagine that, profits over national safety."

The Kushner family is connected to Oscar Health, a health insurance company that recently launched a website to help locate nearby testing centers for the novel coronavirus.

Business Insider reported that Oscar Health shared the code it developed with HHS after it made its online portal public. But we found no evidence that Trump formally designated the company to help with the White House’s COVID-19 testing efforts.

Business Insider, "The Trump administration is working with the healthcare startup founded by Jared Kushner's brother to power a coronavirus tool," March 19, 2020

The New York Times, "Coronavirus Tests Are Now Free, but Treatment Could Still Cost You," March 19, 2020

Snopes, "Does Jared Kushner’s Brother Own a Company Involved in COVID-19 Testing?" March 16, 2020

The Washington Post, "Trump announced Google was building a virus screening tool. Then someone had to build it," March 16, 2020

The New York Times, "Seeking Advice on the Coronavirus, Jared Kushner Enlists a Doctor in the Family," March 13, 2020

CNN, "Jared Kushner is still selling off his business assets," May 8, 2017