Chain message
stated on March 23, 2020 in a Snapchat screenshot:
Says "special military helicopters will spray pesticide against the Corona virus in the skies all over the country."

Not even neighborhood social networking apps are safe from misinformation about the COVID-19 pandemic.

A recent post on Neighbors, an app created by Ring — the company that makes video doorbells — claims that the United States military is using helicopters to "spray pesticide against the Corona virus in the skies all over the country." A map on the post indicates that the user shared it in San Diego.

"So you must stay indoors after twelve o’clock at night and remove all clothes which are outside," the post reads. "When you hear the sounds of airplanes at night, it is for you to know that it is related to this matter (COVID-19)."

A reader sent us a screenshot of the post, which was subsequently shared on Snapchat, on March 23. The text of the post has also been shared on Facebook. 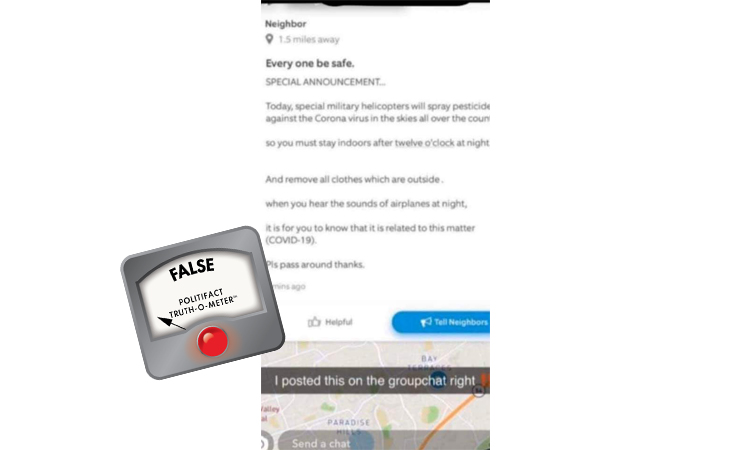 We’ve seen several other chain messages that make false claims about the military’s actions against the coronavirus, so we decided to check this one out, too.

There is no evidence that the U.S. military is using helicopters to spray coronavirus-killing pesticide on American communities. A similar hoax has been passed around in Pakistan, India, Malaysia, Egypt, the Philippines and the United Arab Emirates.

On March 22, President Donald Trump said during a press briefing that the federal government is deploying additional National Guard assistance to New York, California and Washington to help slow the spread of the coronavirus. During the same briefing, Vice President Mike Pence said the government is also working with the military to charter flights for Americans abroad.

Meanwhile, Navy ships have been sent to New York and California to provide additional health care support. The Army Corps of Engineers is building more medical facilities. And, according to the Military Times, more than 8,000 National Guard troops have been mobilized in all 50 states.

That’s a significant activation of the military within U.S. borders, but it’s a far cry from using helicopters to spray pesticides on cities across the country.

Still, there is a historical precedent for using helicopters to distribute pesticides. In September, Rhode Island officials approved aerial spraying to kill mosquitoes, which had caused an outbreak of the eastern equine encephalitis (EEE) virus. Other states have taken similar actions, and the U.S. Air Force Reserve has an aerial spray program.

But those efforts are aimed at limiting the populations of insects that carry diseases, not the diseases themselves. And while Chinese officials have used drones to disinfect surfaces potentially tainted by the coronavirus, experts told us there is no evidence that spraying pesticide from a helicopter would kill the virus on the ground in the U.S.

"That idea is pretty far-fetched," said Murray Isman, dean emeritus of the Faculty of Land and Food Systems at the University of British Columbia, in an email. "There are no pesticides that specifically target viruses, and general antimicrobials that might have any effect (bleach, alcohol) would have to be applied in ridiculously high volumes."

According to the Environmental Protection Agency, disinfectants qualify as "antimicrobial pesticides" since they are used to kill bacteria and viruses. The agency has listed dozens of products on its website that meet the criteria for use against the coronavirus.

Alt News, "No medicine will be sprayed in the air to kill coronavirus; fake message viral," March 20, 2020

Email from Murray Isman, dean emeritus of the Faculty of Land and Food Systems at the University of British Columbia, March 23, 2020

Gulf Business, "UAE dismisses rumours that it is ‘spraying pesticides’ to curb spread of Covid-19," March 18, 2020

The Military Times, "More than 8,000 Guardsmen have been mobilized in all states, 3 territories and Washington, DC"

PolitiFact, "Chain message is wrong about the National Guard, military and a nationwide quarantine," March 20, 2020

PolitiFact, "Fact-checking a chain message about a national quarantine on iMessage, WhatsApp," March 17, 2020