Chain message
stated on March 16, 2020 in a text:
Donald Trump is “announcing tomorrow that the US is going into quarantine for the next 14 days.”

A chain message circulating on messaging apps claims the United States is about to enter a period of federally mandated quarantine. The source: "my aunt’s friend" who works for the government.

There is no evidence of this.

The message, which a reader sent us a screenshot of on March 16, appears in a group chat on iMessage. The sender claims to have information from "my aunt's friend" who works for the Centers for Disease Control and Prevention and "just got out of a meeting with Trump."

"He’s announcing tomorrow that the U.S. is going into quarantine for the next 14 days," the message reads. "Meaning everyone needs to stay in their homes/where they are."

We’ve seen screenshots of similar messages circulating on WhatsApp, a private messaging app that’s popular abroad. Misinformation tends to get passed around via chain messages during major news events, so we looked into this one. 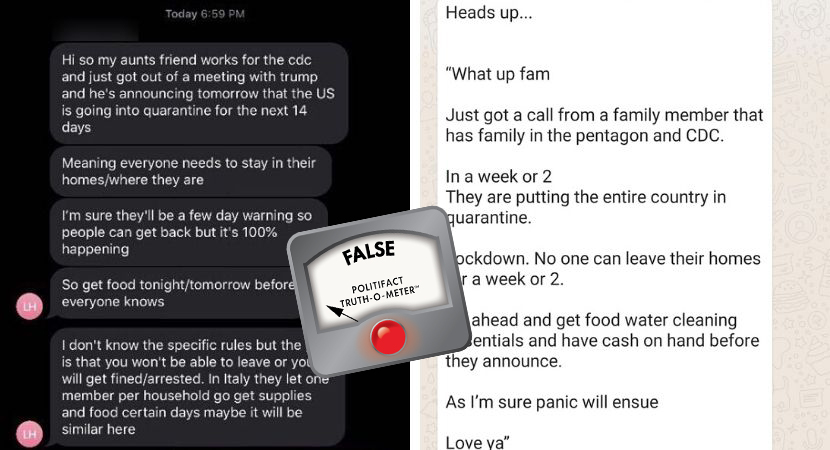 There is no evidence that the federal government is set to announce a nationwide lockdown like the ones seen in France, Italy and Spain. President Donald Trump and the National Security Council have both refuted the claim.

In a press conference March 16, Trump outlined several recommendations to prevent the spread of the coronavirus. Among them is avoiding gatherings of 10 or more people.

"My administration is recommending that all Americans, including the young and healthy, work to engage in schooling from home when possible, avoid gathering in groups of more than 10 people, avoid discretionary travel and avoid eating and drinking in bars, restaurants and public food courts," he said.

In response to a question, he said the administration is not considering a national curfew or quarantine. He reiterated that point in another press conference March 17.

"It’s a very big step. It’s something we talk about, but we haven’t decided to do that," he said.

One of the places where officials have ordered a lockdown is New Rochelle, N.Y., where Gov. Andrew Cuomo ordered a one-mile containment zone on March 10. Large gathering spots were closed for 14 days and National Guard troops are delivering food to people.

In the San Francisco Bay Area, local officials on March 16 announced sweeping measures to try to contain the coronavirus. Residents of six counties have been ordered to "shelter in place" in their homes and stay away from others as much as possible for the next three weeks. The move falls short of a total lockdown.

At the federal level, the CDC does have the power to quarantine people who may have come in contact with someone infected by the coronavirus, but most quarantines are done voluntarily. And decisions are usually left up to states and localities.

We reached out to the CDC for comment on the chain message, but we haven’t heard back.

PolitiFact, "Clarifying what’s accurate, and not, in claims about quarantines," March 16, 2020

PolitiFact, "In the weeks after El Paso and Dayton, mass shooting rumors spread on Snapchat and iMessage," Aug. 26, 2019