President-elect Joe Biden has won the most votes in the U.S. presidential election, but a map published on Facebook claims to show President Donald Trump with a slight edge in the electoral college.

The map, published in a Nov. 11 post, shows Trump with 232 electoral votes and Biden with 227. The map shows North Carolina in the Trump column, while other battleground states — Arizona, Wisconsin, Michigan, Georgia, Nevada and Pennsylvania — are labeled as having "incomplete or contested results."

"The real electoral map...... before the lying media called it for Biden," the caption says. 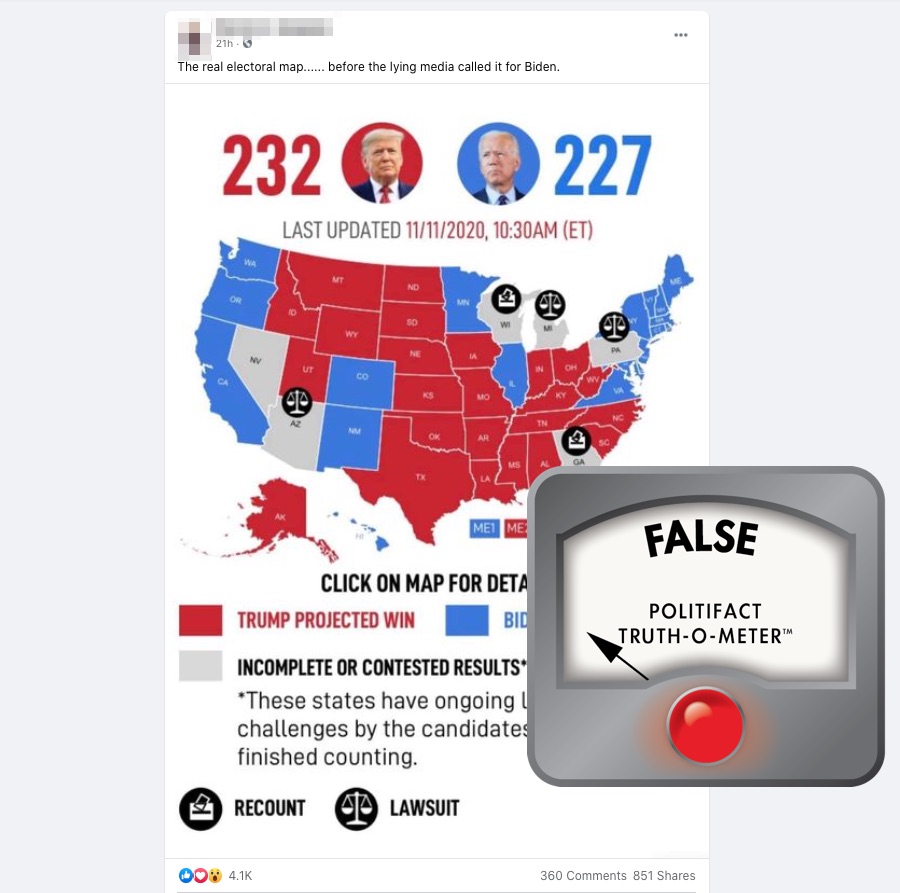 The post was flagged as part of Facebook’s efforts to combat false news and misinformation on its News Feed. (Read more about our partnership with Facebook.) Similar claims have spread in groups dedicated to the Stop the Steal movement, which took off after Election Day and has spread misinformation about voter fraud.

We’ve seen several inaccurate and misleading electoral maps that make it seem like Trump was leading Biden in electoral votes. This one is similarly wrong.

The map in the Facebook post comes from the Epoch Times, a pro-Trump news outlet with a history of publishing misinformation. As of Nov. 11, the website said the election outcome is "unclear" and that it "will not declare a winner of the election until all results are certified and any legal challenges are resolved."

States have until Dec. 8 to finalize their results. State electors cast their ballots Dec. 14, but the vote will not be made official until Jan. 6, when Congress tallies the electoral votes.

But Biden is the clear winner, as he received more votes than Trump in battleground states like Wisconsin, Michigan and Pennsylvania, which helped put him over the 270 electoral vote threshold for election. Every major TV network and the Associated Press has projected that Biden won the election.

In Pennsylvania, the former vice president led by more than 50,000 votes. It’s unlikely that the Trump campaign’s legal challenges in the state will make up that gap.

So where does the electoral map stand?

As of Nov. 12, Biden was projected to win 290 electoral votes — 20 more than he needs to win the White House — while Trump is expected to win 217. The AP hasn’t called North Carolina or Georgia for either candidate.

The New York Times, "Tracking Which News Outlets Have Called the Presidential Race in Each State," Nov. 7, 2020

The Philadelphia Inquirer, "Do Trump’s legal challenges have any chance of changing Pa.’s election results? A look at the suits he hopes can do it." Nov. 9, 2020

PolitiFact, "How online misinformation unfolded after Election Day, boosted by Trump and his allies," Nov. 5, 2020